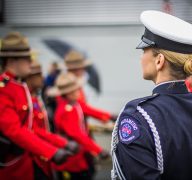 Funny, most Canadians simply say RCMP (Royal Canadian Mounted Police).  At least everyone I know does.  But to the rest of planet earth, people say “Mounties.”  When I read Grass Dance by Kathryn Imbriani, her book made me want to read and research about the Northwest Mounted Police, as the RCMP was known way back in the day.

I even began to wonder if I could write a romance starring an Indigenous woman and a Northwest Mounted Police constable.  So I added a few more books to my already growing pile of research essays and books, LOL, just in case I could dream up such a plot.

The Wild Ride by Charles Wilkins

The Wild Ride is a book like no other—an epic record of the opening of the Canadian west. It is the story of a force of untested young men, mounted policemen in crimson coats, sent west to do what they could to bring law and order to the land.

The Wild Ride is history related in a bold way: as storytelling, as theatre, as art and exhibition, brought to life by an inspired collection of photos, artifacts, and ephemera.

Riding to the Rescue by Steve Hewitt

The Mountie may be one of Canada’s best-known national symbols, yet much of the post-nineteenth century history of the Royal Canadian Mounted Police remains unexamined, particularly the period between 1914 and 1939, when the RCMP underwent enormous transformation. The nature of this transformation as it took place in Alberta and Saskatchewan – where the Mounties have traditionally dominated policing – is the focus of Steve Hewitt’s Riding to the Rescue.

During the 1914-to-1939 period, the nineteenth-century model of the RCMP was evolving into a twentieth-century version, and the institution that emerged responded to a nation that was being transformed as well. Forces such as industrialization, mass immigration, urbanization, and political radicalism compelled the Mounties to look away from the frontier and toward a new era.

Like many other pioneering North West Mounted Police officers, Cecil Denny was a colourful, independent man with a career full of conquests and controversy. He and his comrades played key roles in the taming of Canada’s wild and woolly west, and in this compilation of selected writings from his books The Law Marches West and The Riders of the Plains, we get that story straight from the horse’s mouth. Denny relates the fascinating saga of the newly formed police force’s 800-mile trek west in 1874 to deal with outlaw whisky traders, then gives us a first-hand account of the challenges and adventures they experienced bringing law and order to this “great lone land.”

The Last Patrol by Keith Billington

It was a quiet December morning in 1910 when Inspector Fitzgerald and his crew left Fort McPherson, Northwest Territories, on a dog team patrol to Dawson City, Yukon. Their departure was without fanfare, and after a brief handshake and a salute, the men pulled out of the village and onto the frozen Peel River. Sadly, these four officers of the Royal Northwest Mounted Police would be remembered as the Lost Patrol of 1911. During the grueling 764-kilometre journey, after running out of supplies and experiencing brutally cold weather, they faced starvation and eventually froze to death.

Sixty years later, Keith Billington, an outpost nurse working in Fort McPherson, organized a re-enactment of the historic trip using dog teams before Dempster Highway was built. Intrigued by the story of the Lost Patrol, he recruited ten men to join him. Nine of his companions were experienced Gwich’in men, two of whom had previously made the trip.

Unlike the original patrol, Billington’s departure attracted much media attention. On February 15, 1970, television crews and dignitaries from different agencies all descended on Fort McPherson to document the start of Billington’s “Last Patrol.” Some wished them well and some were convinced this expedition might also end in disaster, or that they would be forced by harsh conditions to abandon their journey and return home.

In the Mind of a Mountie by T.M. “Scotty” Gardiner

In the Mind of a Mountie provides deep insight into the thought processes, self-discipline and integrity required to be an exemplary policeman. “There is no LUCK in investigation,” Gardiner emphasizes. “Instead you must focus on PREPARATION, so you will recognize OPPORTUNITY.”

With masterful storytelling, Scotty Gardiner brings vividly to life the role of a policeman and investigator in late 20th-century Canadian society.

Unfortunately, I don’t have “buy” links because I simply ran out of time.  I’m facing a writing deadline.  I thought to include the last book by Mr. Gardiner, although it’s not historical, because it’s a wonderful read and a look into the “mind of a Mountie.”

If you have any other historical books on the RCMP, please comment with the name and author.  I’d be most interested in reading them.

2 thoughts on “Those Mounties!”