Love is in the air!

Although I don’t watch a lot of romance movies (go figure because I love romance novels), certain couples grab my attention when I’m immersed in an action movie.  There are times when I do pop in a mushy DVD full of romance, and surprise, it’s the secondary couple I prefer.  And the other time, it’s the main couple who grab my attention.

So today’s post is about couples who stood out on film.

From the Twilight Saga, Alice Cullen and Jasper Hale beat out Bella Swan and Edward Cullen because the former were so devoted to each other.  Plus, their personalities meshed wonderfully.  Jasper was fighting his thirst for blood and managed to overcome taking human life through Alice’s love and devotion.  In turn, Jasper thought the world of the selfless and giving Alice who helped others reach their potential.

The Mummy Trilogy is one of my favourite action movies.  I love the peek into ancient Egypt.  Although most people favour Evie and Rick (the main couple), I was drawn to Anck Su Namun and Imhotep’s forbidden love that spanned centuries.  When Anck Su Namun’s lover (Seti I) caught her and Imotep in a tryst, they murdered the Pharaoh.  Many booed these two, but I adored them for their evil nature–especially Anck Su Namun who had the powerful Imotep wrapped around her pretty finger.

Everyone picks Princess Leah and Han Solo are their fave couple, but not me.  I’m a big fan of the Star Wars prequels (again, I’m in the minority LOL), and the couple I adore are Padme Naberrie and Anakin Skywalker.  I loved the fact he was a Jedi, forbidden to enter into a relationship with a woman.  Padme was a senator.  Yet they fought against the bad together and fell deeply in love.  It was tragic, sort of Romeo and Juliet.  I always wished they could have ridden off into the sunset together.

Jessie Walters and Michael Skye from Sooner or Later were a match made in heaven.  The problem was she was thirteen and he was seventeen.  How did she get an older boy to fall for her?  She concocted a plan of lies to win him for herself.  Talk about chutzpah, LOL.  This is what every young girl dreams about–a rock star to call her own.  Michael adored her and she adored him. 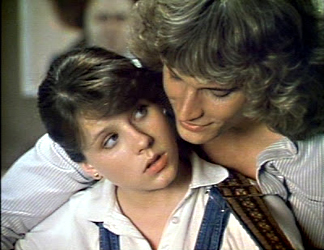 The Warriors were fighting to get back to Coney Island after a gathering of gangs ended in death for the biggest gang leader of New York City.  While Swan led his boys through the back streets of the night, he came across the spunky and sexy Mercy.  Swan wanted out of gang life, while Mercy was looking for a good time.  But the chemistry between them couldn’t be denied.  As much as Swan hated what Mercy stood for, he was unable to resist her.

I was just a young girl when I watched Mad Max II aka The Road Warrior.  When I saw Wez and the Golden Youth appear in the opening scene, I was intrigued.  I thought the blond man was beyond gorgeous and his crazy, snarling buddy too cool for words.  Later on, my older brother’s friend told me that Wez and the Golden Youth were a couple.  Imagine how my heart cheered, because I secretly wished they were a couple, although I didn’t know at the time male pairings existed.  I think this was what got me started on m/m romance, because no matter how hard I looked, I couldn’t find a book at the library or another movie featuring a male couple.

Wez and the Golden Youth

Thunderheart is one of my favourite movies.  Although fate came between Maggie Eagle Bear and Ray Levoi, they would have made an awesome pairing if not for the super-bad guys.  She was a headstrong traditionalist fighting for the old people and children, while Ray came to clean up a mess in a couple of days, but instead learned a lot about the one side of his blood he kept rejecting.

In Mermaids, Charlotte Flax and Joe were odd people (what I adored about them) and a great couple.  While she was a Jewish girl obsessed with Catholicism, Joe was a handsome man of mystery, driving the school bus every day and working at the convent where the good sisters toiled and prayed.  I wish more would have been revealed about Joe.  As for the ending, I have no clue if these two had their HEA–I’m guessing they didn’t.

A movie I always enjoy is Velvet Goldmine.  It takes place during an era I wished I would have been a part of–the glam seventies.  Brian Slade and Curt Wild are rock stars who meet and fall in love.  My favourite scene is when Curt is playing guitar on stage and Brian approaches him.  What takes place next is hot! 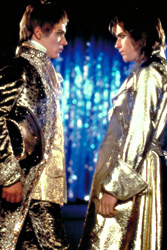 How about you?  Who are your favourite romance couples?  I’d love to hear about them.