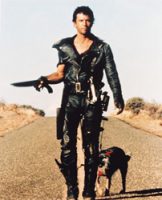 Heroes, they come in all shapes and forms. Max Rockatansky from the Mad Max trilogy doesn’t want to be anyone’s saviour. A simple man, he desires to survive in a wasteland world and nothing more. Hero? Companionship? No thanks. His blue heeler is sufficient company.

Then there’s Kyle Reese, a brave, intelligent, and dedicated fighter who battles machines with John Conner in a violent world in The Terminator. Reese risks his life by journeying to the past to save Sarah Conner.

What about Chandos from Johanna Lindsey’s a Heart So Wild? He’s hell-bent on vengeance when a group of men murder and rape his mother, sister, and the other women in his peaceful Comanche village. Reluctantly, he agrees to help a young woman travel to Waco, Texas.

Last but not least is Joshua Rivers from Rosanne Bittner’s Oregon Bride. An easy-going, helpful, sweet man who never flexes muscle unless provoked, he comes to Marybeth MacKinder’s aid when nobody else will to put an end to the abuse inflicted on her by John MacKinder–Marybeth’s nasty brother-in-law.

Heroes all have pasts. Some are more scarred than others. When writing the hero, I always have a certain song on hand that embodies this individual. I thought I’d share with you some YouTube links that I come to think of as The Hero’s Theme.

1. The Outlaw Torn – Metallica. A great tune for the tortured, reluctant hero.
2. Bludfuk – Jake E Lee. A great instrumental for the hero seeking vengeance.
3. Roll Me Away – Bob Seger. For the drifting hero who won’t settle down in one place.
4. Desperado – Eagles. Ambition drives this hero who doesn’t have time for love.
5. Rough Boy – ZZ Top. For the bad boy hero in a YA novel.
6. Gambler – Whitesnake. The hero who’d had enough of the open road and longs to settle down.
7. Standing Alone – Tyketto. The tormented hero who wants to break free from his past but has major trust issues.
8. Down the River of No Return – Babylon A.D. A beaten hero wishing for help.
9. Primal Scream – Motley Crue. A hero’s abusive past catching up with him.
10. Fire in the Sky – Ozzy Osbourne. Another hero’s abusive past catching up to him.
11. Addicted to Chaos – Megadeth. A hero left alone.
12. What About Me? – Moving Pictures. For the YA hero in a not-so-nice home.
13. Fight to Survive – White Lion. A hero who won’t give up.
14. In the City – Joe Walsh. I first heard this song at the end of the Warriors. A very nice tune for a hero who grew up in the inner-city and wants to find something better.
15. Billy’s Got a Gun – Def Leppard. Kicked around since the day he was born, he’s had enough. Someone’s gotta pay.
16. Die Hard the Hunter – Def Leppard. A soldier back from war who can’t forget.
17. Wild Hearted Son – The Cult. They may have stuck him on the rez, cut his hair, and took away his language, but they won’t steal his spirit.
18. Outside – Staind. He’s a misfit and never belonged.
19. Don’t Tell Me What Love Can Do – Van Halen. He doesn’t believe what he does will have negative repercussions.

20. No list would be complete without Hero by Chad Kroeger.

What about you?  Does your hero have a certain song?