Today, I’m hosting authors Nic Starr and BL Maxwell’s latest release The Final Salvation, book three in the Four Packs Trilogy, a m/m paranormal romance.  Be sure to read my review (check out the reviews for books one and two).  And don’t forget to enter the Rafflecopter giveaway.

Blurb:  Luca Bassani enjoyed a quiet, ordinary life. As an IT guru, most of his time was spent engrossed in technology and away from people. Now all that’s changed. As the one man who is a compatible donor, he’s suddenly essential to keeping his alpha healthy and preventing him from succumbing to The Slow Death. But serving his alpha, Zander Kingston, is something Luca is proud to do.

Diesel Jones is an enforcer. Following in his father’s footsteps, he has big boots to fill. But he’s focused and dedicated to the East Territory pack and avoids anything that distracts him from his duty. His dedication, together with his brawn and brains, ensure his reputation as being the best at his job.

When a possible threat on Alpha Zander Kingston’s life is uncovered, tensions rise within the pack. Security is increased and Diesel is assigned as the personal bodyguard for Luca. They find themselves paired against the enemy while battling their growing attraction.

Diesel must keep Luca safe and ensure his alpha’s life by doing so. But pack rivalry is strong and when threats become actions, suddenly Diesel is in the race of his life to ensure the future of the pack and to save the person who has come to mean everything to him.

The Final Salvation is part of the Four Packs Trilogy. While it can be read as a standalone, to ensure maximum enjoyment, it is best read in series order. 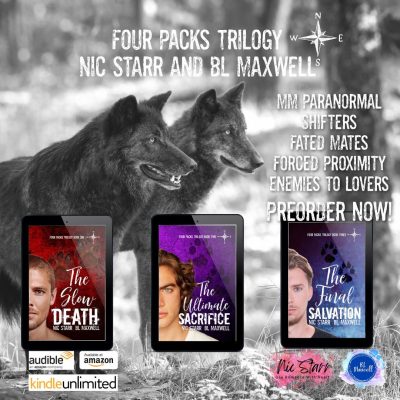 “Alpha, we came as soon as we got your message. We’re here to accompany to you to the North Territory as soon as you’re ready.” The one that spoke was the head enforcer, a big man with grey hair that somehow made him seem less intimidating—until he turned his eyes on Luca. They were not the warm, friendly eyes of someone’s grandfather, but the cold emotionless glare of a serious enforcer.

“Luca and my mate will also be joining us. I want one of you on each of them,” Zander directed.

The head enforcer bristled but bowed his head in respect. “Of course, Alpha. I suggest we take two vehicles. That way it won’t be quite so obvious that we’re all traveling together. The less conspicuous the better.”

One of the enforcers was familiar to Luca, but he couldn’t place where he knew him from. He was younger than the others, but in height and bulk he was bigger than them. He scanned the room while Zander spoke more in depth to the older enforcer, as Marrok watched on. He had yet to start the transfusion, and Luca wondered if they’d still be doing a treatment. When Luca’s and the enforcer’s eyes locked on each other, the strange feeling Luca had earlier intensified. The enforcer’s eyes widened in shock, but just as suddenly as it had happened, he looked away. Luca narrowed his eyes as he focused on the enforcer. His hair was cut short, and his eyes were both intelligent and vigilant. He seemed to see everything and analyze it as either a threat or a minor annoyance. He was all muscle, and it was no small feat that his shirt didn’t explode from all it contained.

Luca laughed at his thoughts, making everyone look. A blush crept up from his neck to his cheeks. “Sorry, I was just remembering something funny I saw on television,” he mumbled. 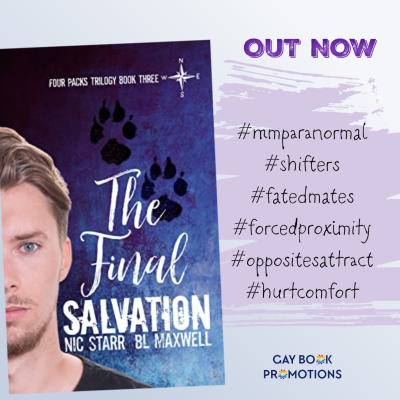 We are at the end of the Four Packs trilogy, and I must say the authors did not disappoint.  Let’s start with the main characters.  Luca is a character we meet in the first novel.  He’s a quiet, introverted IT guru, and also the donor for the alpha Zander, who relies on Luca to stay alive and fight the slow death.

Then there is Diesel Jones.  He’s an enforcer and his job is to guard not only the alpha but the whole pack, as his father once did.  Being new to paranormal romance, I enjoyed meeting an enforcer because this allowed me to get a glimpse of what’s wired into enforcers.  And boy, Diesel does his job well.  This guy protects with a capital P.  Sometimes he’s too protective LOL, but it’s something he can’t change.  I really liked this concept since it added to the world-building that the authors have done a great job of from the start of the series.

As recommended by the authors, each romance is a standalone, but to fully enjoy each one, read the series, because there is a storyline arc threading through each novel.

There is a big threat against Zander in this novel, as well as his donor Luca.  I had a good hunch about the threat because I’ve read and reviewed each book in the series, but I won’t say anything so I don’t spoil it for you.  Let’s say “the problem” is done well.  It addresses tradition, the evolution of the packs, and plenty of romance because Luca and Diesel are glued to each other’s sides since Diesel’s job is to protect Luca.

Diesel is in denial about his feelings.  After all, his job is to protect; not start a romance!  Taking his job so seriously, he knows he can’t be distracted or he’ll lose focus on what he’s been created to be from birth, something this proud of and he prides himself on.  I liked this.  But it’s hard for him to resist the sweet and quiet Luca.

The writing is top-notch.  Again, the authors work well together.  You can’t tell who wrote which chapters and who is who.  It’s all narratively driven by the two main characters.

I also enjoyed the epilogue.  It wraps up the trilogy nicely.  Do yourself a favour and read the whole series.  It’s more than just a paranormal romance.  It addresses current issues in the world that we live in but in a paranormal way. 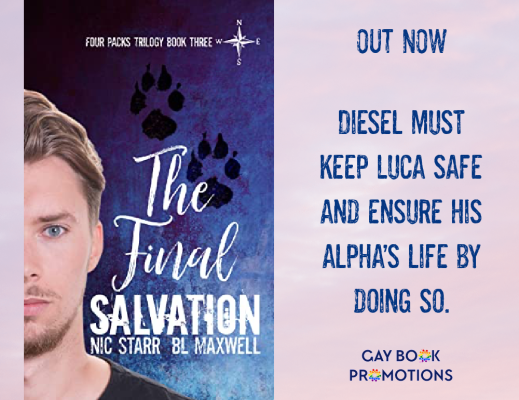 BL Maxwell grew up in a small town listening to her grandfather spin tales about his childhood. Later she became an avid reader and after a certain vampire series she became obsessed with fanfiction. She soon discovered Slash fanfiction and later discovered the MM genre and was hooked.

Nic Starr lives in Australia where she tries to squeeze as much into her busy life as possible. Balancing the demands of a corporate career with raising a family and writing can be challenging but she wouldn’t give it up for the world.

Always a reader, the lure of m/m romance was strong and she devoured hundreds of wonderful m/m romance books before eventually realising she had some stories of her own that needed to be told!

When not writing or reading, she loves to spend time with her family–an understanding husband and two beautiful daughters–and is often found indulging in her love of cooking and planning her dream home in the country.

You can find Nic on Facebook, Twitter and her blog. She’d love it if you stopped by to say hi.

Enter the Rafflecopter Giveaway for a chance to win a $10 Amazon Gift Card.