December is I :::Heart::: the Holidays month at my blog. During these next twenty-two days, besides the usual blog posts, I’m featuring authors who write holiday romance. Today, I have Jemi Fraser in the interview chair. We’re discussing Reaching for Home, book nine in the Bloo Moose Romance series. Be sure to check out the excerpt.

1. What draws you to writing holiday romance?

Jemi:  I love holiday romance! There’s an extra dose (or two) of the warm fuzzy feelings in a Christmas romance. I find myself smiling as I write them and when I read them. There’s something magical about the holidays and it’s a perfect time to give happy endings to those who need them most!

2. How many holiday romances have you written so far? And which one would you recommend for readers to try, besides the one you are featuring? Feel free to leave a link.

Jemi:  I’ve written 2 holiday romances so far. My first was Reaching For Christmas (2020) and it features thriller writer Max Fortini and photographer Lil LaChance (little sister of Jaz in Reaching For Home). This is a brother’s best friend, friends to lovers romance that will leave you with all those warm fuzzies! https://jemifraser.com/reaching-for-christmas/

3. What do you like most about writing holiday romance?

Jemi:  I write romantic suspense, so there’s always some danger involved. My favourite part of writing holiday romances is when the danger has been resolved and the characters get to focus on the love that surrounds the holiday. Those final scenes and epilogues are such joy to write!

4. What do you like least about writing holiday romance?

Jemi:  I’ve written my holiday romances in the off-season and that can be hard! We get a LOT of snow in Northern Ontario and writing a Christmas story in the spring/summer sometimes makes it feel like winter hasn’t left or is back a little early!

5. What inspired you to write your featured holiday story?

Jemi:  The main male character of this story is Jaz LaChance. He’s the first character who came to mind when I started creating Bloo Moose a few years ago. He’s waited a LONG time for his story. When Nia arrived in town I knew she was the one Jaz (and I) had been waiting for. With the danger lurking in her past, the plot came together quickly.

6. If a reader asked you why they should read your holiday romance, what would you tell them?

Jemi:  Reaching For Home is a story about redemption, belief in yourself, and fresh starts. It’s about learning to love yourself and taking risks to love someone else. As a single mom, Nia will do anything to protect her son. And despite being the last person Jaz expected (or wanted) to see in his home town, it isn’t long before he’s willing to do anything to keep the two of them safe as well. It’s a feel-good, heart-warming story!

7. Lastly, how are you going to spend the holidays?

Jemi:  Surrounded by family! We’re lucky to have our close family all living in town. We’ll celebrate together with all kinds of fun and even more kinds of food! Can’t wait!

She’s the very last person he wants to see in his town but she might hold the key to his future.

Blurb:  Nia Alexander is leaving the costume rooms of Hollywood in her rearview mirror and taking her son across the country for a fresh start and a white Christmas. She’s also hoping to leave behind the threats from the jerk who didn’t want to hear the word No. Jaz LaChance is never going back to the limelight. It’s been almost a decade since his photos were splashed in magazines and on billboards. Funding new businesses in Bloo Moose is better. Until Nia turns out to be a new tenant. Nia saved his ass once, but every time he looks at her, he remembers the humiliation of that night. When Jaz discovers Nia is being threatened, he needs to figure out how to leave the past truly where it belongs. If they can trust each other they might be able to make a home of their own for the holidays.

Nia Alexander turned off her car and thumped her head on the steering wheel.

A dozen states in four ridiculously long days with a nine-year-old.

But she’d made it.

Even if it was almost four in the morning. Even if they’d spent their Thanksgiving driving. There’d be lots to be thankful for next year.

Nia didn’t have a key to their new apartment yet, but she’d planned to catch a little sleep in the car before meeting with her landlord.

She hadn’t been expecting the cold. It was barely past Thanksgiving, but Vermont didn’t appear to care. A layer of snow covered everything, and the wind had nearly frozen her lungs when she’d filled up the tank a few hours before.

At least the snow was a good sign she’d be able to produce the white Christmas she’d promised.

A peek over her shoulder showed Malik still sleeping like the baby he’d been five minutes ago. How was it possible he was approaching double digits?

She’d have to turn on the car periodically to keep him warm, so she couldn’t risk falling asleep herself.

At least she’d charged her tablet. She could work on her business plan.

Nia Alexander had a business plan.

She had a meeting with Bea Davis in the afternoon to look at the boutique that would be Nia’s business as of the following morning.

Nia couldn’t stop the seat dance. Her own business. Lots of terror in those words, but so much joy as well.

One for her and Malik. A way to ensure his future and his happiness. Nothing else mattered.

A flash of headlights brightened the interior of her car. Nia checked her locks and put her hand on the key. Did she need to run?

She’d been too tired to think to back in. It should be habit by now.

A bright blue compact car pulled in beside Nia. Hand still on the key, Nia checked out the driver.

And a big wave.

Nia knew appearances were often deceiving, but if this woman was a threat to her or Malik, she’d go back to working under the nightmare that was Madame LeBreque. That woman had made everyone unpick all the seams and start again if the wind blew from the wrong direction.

The woman in the blue car got out and walked around the front of it to approach Nia’s door.

Knowing she was acting ridiculous, Nia rolled down her window a few inches and kept her hand on the key.

The woman peered into the backseat, and her smile grew. “Is that your boy? I didn’t realize you had a little one. He’s a sweetie. They’re so angelic when they’re sleeping.”

Nia didn’t respond, but that didn’t stop the woman’s smile from growing.

“I’m Megs Carter. I’m the baker for The Lucky. I start every morning at this time. Can’t sleep like I used to. I imagine you’re Nia Alexander. You’re the one taking over Bea’s Boutique. She’s so excited to be moving down south with her grandbabies. Having someone to take over the store has been a big relief.”

Nia found herself smiling back even as she wondered how Megs knew so much about her.

“It’ll be a few hours before you get your key. It’s too cold out here for both of you. Come on into the kitchen with me. We’ll find a good spot for your little one to sleep.”

Minutes later, Malik was snuggled on some coats laid over a couple of chairs pushed together and Nia was sitting with a big mug of coffee and a cranberry muffin.

She couldn’t have been further from her life in LA than if she’d been on the moon.

Megs chatted away as she mixed up dough and batters. Cookies. Muffins. Breads.

The woman might look like a grandma from a fairy tale, but she had the energy of the stunt people in the movies.

Nia imagined fitting Megs Carter for a costume would require the same energy as fitting one of the action heroes she’d worked with.

“So what made you choose Bloo Moose? It’s a long way from California.”

Which was one of the main reasons for choosing it.

Another was sleeping softly in the chairs.

The third she wasn’t discussing.

“Malik and I have always thought snow sounded like fun. It was time for a change and when I saw the ad for the boutique, it seemed like a dream come true.”

A dream that would take her far from a nightmare.

“No family back in California?”

It took a couple of deep breaths before Nia answered. “No. Malik’s grandmother passed away recently, and she was our last tie to the area. I want him to have a fresh start, and a place with a name like Bloo Moose has to be fun. He deserves more fun.”

Nia rolled her lips together to stop the shake audible in her voice.

She should have moved years before. Malik hadn’t been touched by much of the wackiness that was in the industry itself, but her marriage had.

Nia had wanted to run in the other direction.

And now she was.

Shaking her head to clear it, Nia took another sip of coffee. This kind lady who loved to talk appeared harmless, but Nia wasn’t sharing any nightmares.

Those were behind her, and her focus was going to be on building a healthy and happy future for her little guy.

“How did you find our town?”

Nia was glad her dark skin would cover most of her flush. This was where it was a little tricky. A little embarrassing, some might consider it borderline creepy.

She looked over at her boy and knew it wasn’t. She’d made the best choice she could for him.

“I once worked with someone who lived here. He told great stories about the town and when it was time to move, I remembered those stories.”

The kindest man she’d ever met in the industry. One of the sexiest, too. He certainly hadn’t been part of the darkness and slime that covered so much of Hollywood.

They’d worked together a few times, and he’d always treated her with respect. Which wasn’t nearly as common as it should be.

Instead of answering the implied question as to the man’s identity, Nia took another sip of coffee. “Anything I can help you with?”

Megs laughed and shook her head. “No, but thank you. I’ve got it down to a pattern. If anything throws me off, it takes me far longer than normal. But, I do like to have company.”

When the clock showed seven, Megs smiled. “Your keys should arrive any moment now.”

Megs hadn’t made any calls or texts that Nia had seen, so apparently Nia’s landlord was a stickler for routine. As she’d only dealt with the realtor, she didn’t know who the landlord would be.

On cue, Nia heard a key in the lock of the back door and the door swung open.

Her mouth dropped open as the man strode in. When he looked up, he froze for a second before moving forward again and forcing a fake smile.

Nia nodded. Apparently, the kind and sexy Jaz LaChance was her new landlord.

And he wasn’t happy about it.

Jemi Fraser writes romantic suspense filled with hope, heart, and humour. Her stories combine her love of mystery with the satisfaction of a Happy Ever After. Love is always worth the risk 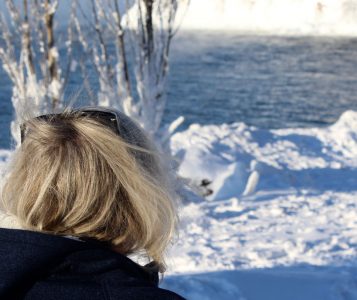