One night.
One bet.
And now my world is turned upside down.
Apparently, you’re not supposed to fall for the rebound guy.
Guess I didn’t get the memo, because the first man I jump into bed with happens to be the one who sparks a flame inside my heart.
With his rakish charm and Irish accent, he steals my sanity and inhibitions.
It’s not long before I’m dreaming of something more than a quick fling.
The problem?
Griffin Gallagher happens to be the one man my brother despises.

“Rae,” Briana’s voice drew my attention. “We are worried about you.” She leaned forward; her face deadly serious. “You know,” she said with her lips pressed together as if she was about to divulge some secret. “Use it or lose it.”

Laughter bubbled from the pit of my stomach and didn’t stop coming until tears slid down my cheeks, and my ribs ached. “Are you serious right now?” I managed while I tried to catch my breath.

“She has a point,” Lacy added, her face solemn. “What if you forget how to do it.”

“Oh my goodness.” I shook my head in disbelief. “How much have the two of you had to drink?” My narrowed gaze flicked from one to the other. “I’m positive that I will not forget how to have sex.”

Briana’s slender shoulder rose and fell in a small shrug. “Only one way to find out.” The competitive side of me stood up and took notice of the hint of challenge in her voice. “I’ll bet you fifty bucks that you can’t pick up a guy and leave with him.”

“Oooooh, I want in on this.” Lacy smacked her palm against the surface of the table.

“You have lost your damn minds.”

Sitting up a bit straighter, Brie smiled sweetly before she said, “Okay, what about this: if you manage to leave with a guy tonight, we’ll stop setting you up.”

The smug look on both their faces had me saying, “You’re on,” before my brain had time to comprehend this was probably a bad idea.

“Let’s make this interesting.” Lacy tapped a perfectly manicured finger against her chin. “Brie and I choose the guy.” When I tilted my head and eyed her suspiciously, she added, “Oh come on, you know we actually want you to get laid. Besides, our douche-meter is a little more accurate than yours.”

Ouch, that stung. She wasn’t wrong, though. Brie and Lacy had hated Rob from the get-go. They’d said he’d been too smooth, but I’d been too smitten to listen.

“That guy!” Briana jumped to her feet and not-so-subtly pointed toward someone.

Being as short as I was, I had no hope of spotting whoever she was pointing at from my perch. Pushing out of my seat, I followed her gaze and index finger and almost choked. “Oh hell, no! Are you freaking crazy?” I shook my head vehemently. Somewhere out there, there was a woman who thought the pot-bellied, bald-headed look was sexy as all hell. That woman wasn’t me though.

First off, the author is a wonderful writer.  Her sentences flow.  She provides deep emotion in each character, and she has a lovely voice.  Her description are fresh.  I really enjoyed her writing.

As for the two main characters, Raelyn has gotten out of a bad relationship, so the story naturally opens in a bar with two concerned girlfriends meddling in Raelyn’s sex life.  It was reminiscent of three college girls daring the other.  As for the hero, he has his own set of problems as a firefighter.

The author provides great chemistry between Raelyn and Griffin.  It’s lust/love at first sight for the duo.  But there is a problem—Raelyn’s brother.  I was hoping for something more other than big brother interfering in little sister’s sex-life when its mentioned in the blurb Griffin is the brother’s enemy.  Yes, they’d both lost their parents and they’ve looked out for each other.  I get that.  I really do.  The siblings are ultra-close.  But the story didn’t need this.  Not with the “secret” Griffin’s holding to his chest.  This was enough for the brother to not think highly of Griffin, even blame him if the story had been plotted better.  I would have preferred that instead of the meddling “big brother” trope.

The pacing does lag since we get the same scene from different POVs, the hero and heroine.  I found this unnecessary.  The author is a strong enough writer to convey good body language and emotion of the person without a POV so she doesn’t have to explain herself again in the next chapter.  But I’m guessing a lot of readers like this, or she wouldn’t have done so.

Still, there is nice conflict between Raelyn and Griffin because of their hang-ups.  Griffin’s dealing with his “secret” while Raelyn has come off a very bad relationship.  The inner-conflict of both was nicely done.  Excellent.

As I said, the author’s a strong writer.  Her sentences possess cadence.  Both characters have strong narratives.  If you’re looking for a quick read that doesn’t get to deep, this is the story for you.  Give it a try.  The author has created two likable characters with sizzling chemistry. 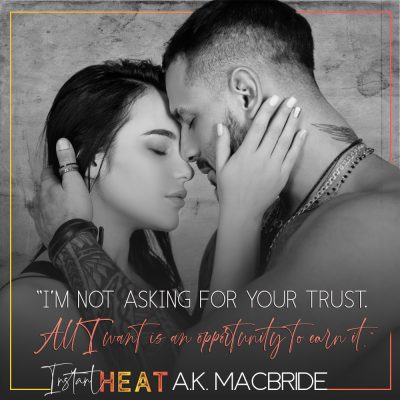 Author of romances that leave you with ALL the feels.

She likes her coffee big and strong and her chocolate sinfully dark.
Living in a small town in South Africa, she’s afforded the luxury of being surrounded by mountains and waking up to birds singing their morning songs.
In addition to her coffee and chocolate obsession, she can’t say no to cheesecake or pastry.
When she is not creating emotional reads that tug on heartstrings, she’s busy being a wife to her best friend and a mom to a sassy little girl (whom she wouldn’t want any other way).

She just so happens to love stalkers, so visit her website www.akmacbride.com to see all the different ways you can get your stalk on.

Enter for a chance to win a signed paperback.