Today, bestselling and award-winning author Lyndell Williams is guesting at my blog.  She’s here to talk about her latest release Building on Broken Dreams, book three in the Brothers in Law series, a contemporary romance.  Don’t forget to enter the Rafflecopter giveaway.

Love Triangle tropes dominate romance plots. For many readers, there is nothing more special than two characters battling to get theirs. The best stories include rivals with depth, encouraging readers to do some serious assessment as to whom best deserves the object of their mutual affections.

In my suspenseful romance, Building on Broken Dreams, Raad Khouri is determined to get his ex Maryam back into his life and bed. Sure, he screwed her over, but that should not be a problem. All he would need to do is lay it on thick and she’ll be back in his arms. After all, he has gotten her to forgive him before.

Unfortunately for Raad, Adam has already spotted Maryam and hits the ground running to getting her snuggled up next to him. Smart and sexy, he is confident that he can convince his teacher’s beautiful niece to forget her past and start a future with him. Nobody will be getting in his way.

Raad is not scared, though. He and Maryam shared a deep love that reached down into both of their souls. Surely, affection like that doesn’t just die, right? Raad embarks on a journey to find Maryam and revive the immortal love that exists only in his sociopathic imagination, maybe.

Afterall, Maryam made a lot of bad decisions to be with Raad. He was her first love, and it can be hard to shake those feelings. Has she grown enough to purge her desires and start a functional relationship with Adam?

Yeah, Raad is one side of a sick love triangle I wrote to highlight how past relationships not only shape us but can be tenacious when it comes to staying in the present. No matter how hard he tries, Raad can’t let go of what he shared with Maryam. He holds onto the hope that they can be together again.

For Maryam, the past and thoughts of Raad haunt her, refusing to die. So much of what she experienced with him remains tied to her, despite her efforts to start a new life with Adam.

Adam refuses to let his or Maryam’s past to influence the future they are building. But Raad turns up, threatening to end their bond so he can have the woman Adam loves.

In Building on Broken Dreams, a trilateral drama by a trio of characters traversing dysfunction and desire unfolds that taps phantoms of lost love and the fear of losing people who capture our hearts. 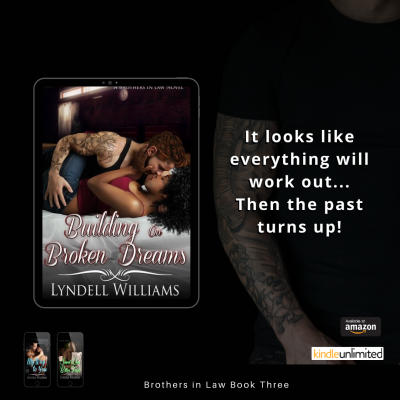 If Maryam Avery stays in New York for one more day, she will die.

Blurb: Trapped in an abusive relationship with the manipulative and cruel Raad, she can feel her life closing in around her. After he chases her from her home and family, Maryam flees to Philadelphia, searching desperately for a new beginning, something to help rebuild her spiritually and physically.

When she meets the mysterious Adam, things are thrown off-kilter. A successful businessperson with his own past that he is fleeing from, he is everything that Maryam wants. But can she trust another man?

Doubt gives way to desire. They find themselves in a whirlwind romance, and for once, it seems like everything will work out.

Until Raad turns up. 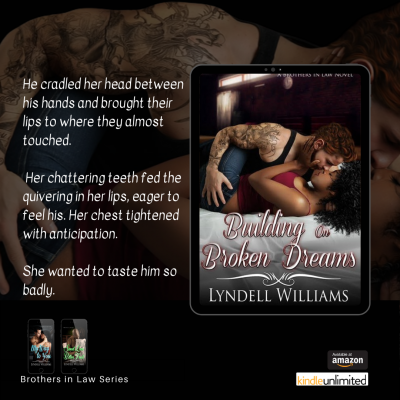 Maryam finished cooking and stood in the hall, holding a thermos of hot coffee in one hand and an egg sandwich half-wrapped in aluminum foil in the other. How angry was he? What is he going to do to her?

Adam strode toward her, grumbling and fumbling with his belt buckle. “Eight months of work shot to hell.” He stopped. His glower transformed into a grin that reached his hazel eyes. “What’s this?”

She plastered on a smile and batted her lashes at a speed almost matching the cadence of her heart. “I thought you could take it with you.”

His shoulders relaxed. He held her face in his hands. “You’re something else, Mary. You know—” he sprayed her lips with kisses “—I owe you a honeymoon. How about I arrange one?”

He pressed her backward, pinning her between his body and the wall. The heat reignited and waved through her, burning away any fear or anxiety. He might have been angry, but not with her, and he would not take it out on her. She balanced the sandwich and mug in her hands. Her breathing got heavier with each nip to her neck. “Adam.”

He stepped back and reached into her robe. “Mary,” he groaned and yanked her panties from her hips while uttering a dua. Already moist white lace and satin fell to her feet. He propped against the wall across from her and ripped open his pants snap and zipper. “When you same my name like that, I got to have you.”

“Will wait.” His rough hands spanned up her thighs and clenched her rear, lifting her. His breath rushed into her ear. “I want you now. Do you want this D or not?”

His throbbing stiffness titillated her fiery folds. “Yes.” She locked her legs around his hips at her ankles and squeezed his broad shoulders as he stretched and filled her. “Adam, please.” She slowly blinked at the bobbing picture of Mecca hanging on the opposite as he bounced her on his stiffness. The movement of their bodies fed a mounting desire. Their first time together had been so tender. He had eased her fears and brought her to ecstasy. Now, the raw lust surging between them infused every inch of her in a way she had never felt before. It was all so glorious. She tucked her heels under his tense bottom, stilling his thrusts and unleashing a carnal shriek from deep inside. He soon roared in release and set her down. She panted, leaning against the wall and letting her legs drop.

He trailed pecks up her neck before stealing her air with a lingering kiss on her lips. He pinned her gaze while adjusting and closing his pants. “You don’t know what you do to me, Mary. I’ve never wanted someone so much.” He disappeared into the kitchen. Water ran for a moment before he came back, taking the thermos and crushed sandwich from her hands. “I’ll be back in time for the next prayer.” He offered salams and bit into it, strutting away and disappearing into the morning light, flooding the opened door. 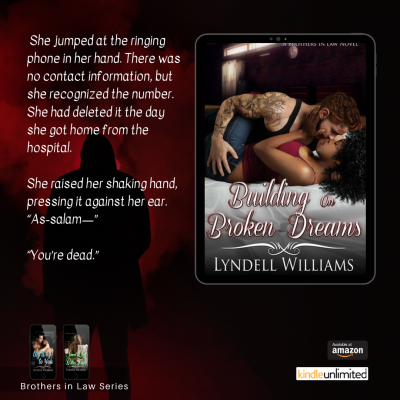 Lyndell Williams is an award-winning writer and bestselling author. She is a cultural critic with a background in literary criticism specializing in romance. She is an editor, writing coach, cultural contributor for Bridging the Gap. She has been published in peer-reviewed journals and writes for multiple online publications.

$20 Amazon gift card, ebook set of the first two books in the series – My Way To You and Bitter Fruit – 1 winner each