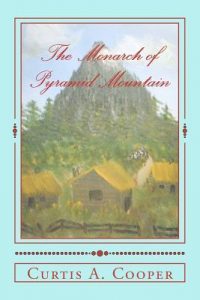 Blurb:  A group of teenagers gather together at a cabin every other Sunday to play a multi-level board game called “The Monarch of Pyramid Mountain.” The object is to reach the top and defeat the Monarch in order to free the villagers that were taken captive and turned into slaves. While playing the game, they practice with real, pre-gunpowder era weapons. Suddenly, they find themselves actually in the game and must win in order to make it back to the real world. As they advance up the mountain, they learn about themselves and each other, while fighting off mythological creatures and the Monarch’s own men.

This is my first time reading a book by the author, and I must say I enjoyed his writing.  The external plot and the internal plot work hand in hand, because the four teenagers consisting of Ernest, Blythe, Scott, and Johnny, have their own issues happening within that they can’t seem to defeat.  The three teenagers lose themselves in the board game after school because they can’t quite face the reality of their lives.

When Scott joins them, the plot thickens, and they are soon cast into the game for real.  Now they must confront their own weaknesses in order to not only help free the slaves, but also break free from their own invisible chains that enslave them.

The game itself, created by the author, is a great idea, and one that could possibly be a real game. I enjoyed this.  Well done.  The same for the word building in the characters’ real world and fantasy world they find themselves in.

The novel does get off to a slow start with the characters’ every day lives at school, at home, and playing the game.  But it really picks up its pace after the first fifty pages.  The dialogue is realistic, witty, and sometimes emotional.  The fight scenes are well done.  The author really excels with action.  But what I enjoyed most, being a lover of character-driven novels, are the internal battles within that each character must face.  I especially enjoyed Scott’s.

The ending is well done.  It leaves a reader with closure as they shut the novel.  If you enjoy young adult fiction, heavy on the action, and Greek mythology, you’ll enjoy the Monarch of Pyramid Mountain. I recommend this book, and suggest you get yourself a copy at Amazon where it’s available for purchase.

Have you read The Monarch of Pyramid Mountain?  If so, do you agree with my review?  If you haven’t read the book, would you be wiling to give the novel a try now?