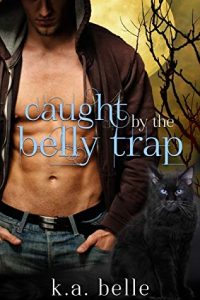 Caught by the Belly Trap by K.A. Belle

Blurb:  When Former Army Pilot Beau Madigan witnesses a cat being attacked, all his protective instincts kick in and he has to intervene. For years, Beau has been a recluse. Left with a traumatic brain injury and blind in one eye after a training accident, he hid away to escape the pity, stares, and stupid questions. But that was before Colby.

Graphic Novelist Colby Dyer has been on his own since his first shift. Believing he was cursed, his family cast him out once they learned Colby’s alter-ego had black fur. Colby never imagined finding a mate, especially while cowering in cat form. To make matters worse, his cat accidentally claims their gorgeous rescuer. In Cat’s defense, it was Beau’s fault.

Will Beau accept his fate once he learns what Colby is or will he abandon Colby like everyone else?

Beau was a wonderful character.  He was nicely developed with a big heart but a load of tragedy.  As for Colby, he also came with his share of baggage.  Even though he faced isolation and loneliness, he had a lot of faith and never gave up.  I really liked that about him.  And I also enjoyed how he brought his faith and hope into Beau’s much-needed world.

The two personalities within the cat/shifter was a neat idea.  I never saw this done before.  The sex scenes were well written.  And the plot was a nice fast pace.  The dialogue was realistic and fun to read.

As for the title, this was clever, and very true to the story.  It’s a light, fun read and doesn’t need to be read during Halloween.  I’m glad I downloaded myself a copy at Prolific Works.  Do yourself a favour and download a copy while the story is still available.

Have you read Caught by the Belly Trap?  If so, do you agree with my review?  If you haven’t read the story, are you willing to now?