Beyond the Surface by Colette Davison

Raen has always longed to see the world beyond the surface, but nothing could compel him to break the most ancient law of the merfolk. Could it?

Blurb:  Raen should have found his mate during his first hunt, instead he almost died. Two years later, he’s struggling with internal fear, and his father’s disapproval.

Until he encounters a land-dweller.

A man he feels a deep and instant connection to.

A man who will drown if Raen doesn’t save him.

But in order to do so, Raen must break two of the merfolk’s rules:

Don’t go beyond the surface.

If Raen saves the man, he stands to lose everything he’s ever known. But if he lets him drown, he’ll lose something infinitely more precious to his heart and soul.

Note:  Beyond the Surface is a paranormal MM romance, with fated mates who almost never met, a sweet insta-love relationship, and an age-gap. 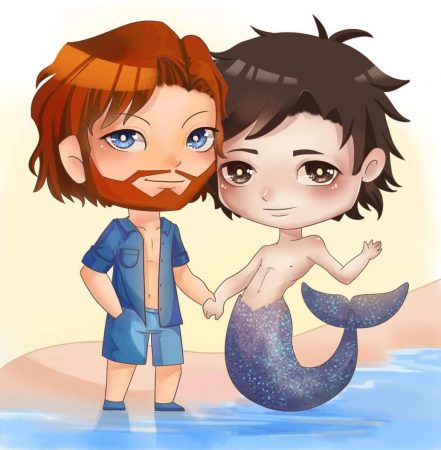 Steven’s head hurt, which stopped him from opening his eyes for several seconds after he came around. He could feel the damp firmness of sand beneath him. Water lapped at his feet, and his drenched clothes clung to him, making him feel heavy. He could taste salt water and bile in his mouth, and his throat and lungs burned. Why was he lying on the beach? He was sure he’d been on the boat, trying to catch a blasted fish that he could cook for dinner. The churning hunger he had felt was gone, replaced by something strange and unfamiliar yet warm and comforting.

He forced his eyes open and found a dark pair of eyes staring down at him from a delicate, pale face. The bewitching eyes widened.

“Who…?” Steven’s voice came out as a strained croak. “Am I…?” He’d meant to say dreaming, but he was finding it difficult to focus on speech, with such a stunning, ethereal creature beside him. It seemed to him that someone had captured the moon and personified it in a beautiful young man with wild raven hair.

He felt cool fingers brush against his shoulder, a touch that felt both alien and familiar. His body relaxed in response, and his eyes drifted shut, even though he wanted to keep them open. He had so many questions, but he was too tired to utter them. The soothing back and forth motion of the cool fingers lulled him to sleep, and he was completely powerless to resist.

He wasn’t sure whether it was seconds, minutes, or hours before he rose to wakefulness once more.

He licked his salty lips and tried to speak. “Who are…?” He coughed and opened his eyes once more.

No one was there. He pushed himself up on shaking arms. A movement out at sea grabbed his attention. His breath caught in his throat as he saw the broad fins of a pale, dappled tail vanish beneath the surface. It was the first glimpse of dolphins he’d seen, and his head was too sore for him to really appreciate the spectacle. Besides, he had other things to worry about, such as where the young man he’d seen had gone. 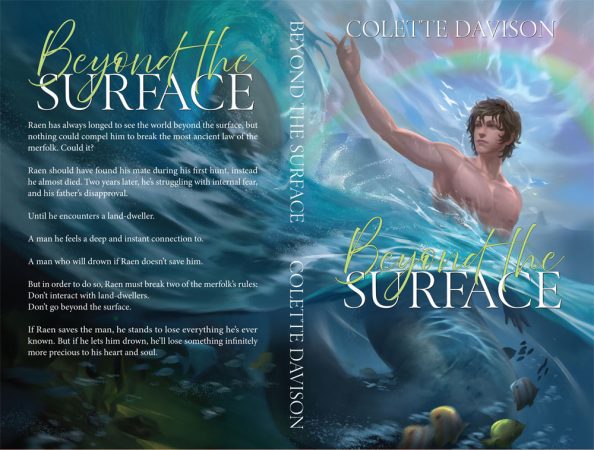 I’ll get straight to the review since you’ve read the blurb.  First, this book is aptly named, and after reading the book, I LOVE the title.  Not that I didn’t love the title beforehand, but reading the book makes the title all the more special.

The romance is very sweet, but intense, and quite steamy.  Since this is my first merman story, I enjoyed reading about the culture of the merfolk.  The author gives a wonderful explanation of family, kinship, rules, and even a powerful tentacle-like woman who rules the merfolk.  The story seemed part fairy tale and part contemporary romance.  Wonderfully done.

As for the underwater scenes, I swear the author is a scuba diver, because the descriptions were so vivid and powerful.  I could see everything she painted for me:  the light coming into the water, the fish, the kelp, the merfolk swimming together, the father confronting the son.  Bravo.

As for the two heroes, both are extremely likeable and sympathetic. You root for them.  Steven is a cute redhead overcoming his battle with leukemia, determined to re-establish himself.  His need to “get away” is well grounded.  As for Raen, he is in search of his fated mate, and he questions the rules the merfolk must follow.  I liked this about him—that he dares to challenge the powerful woman of the sea who rules over them with an iron fist.  I even loved the explanation why she behaved the way she did.

The plot is well executed from start to finish.  Everything works together brilliantly.  This is my first time reading one of Ms. Davison’s work, and she does a great job of presenting a story that is so believable between a human and a merman.

Colette’s personal love story began at university, where she met her future husband. An evening of flirting, in the shadow of Lancaster castle, eventually led to a fairytale wedding. She’s enjoying her own ‘happy ever after’ in the north of England with her husband, two beautiful children and her writing.

Follow the tour and check out the other blog posts and reviews here.

One thought on “Colette Davison – Beyond the Surface”