I thought I’d try something different today by posting an excerpt from the current WIP (Work in Progress) that I’m working on.

Redeemed is the second book in the Matawapit Family Trilogy:  In the wilds of Northwestern Ontario, the secular world challenges the adult children of a perfect Catholic family headed by a full-blooded, domineering church deacon, when a vengeful former lover, an ex-fiancé out on parole, and a seductive family enemy, all dedicated to their Ojibway culture, test the faiths of Emery, Bridget, and Jude. 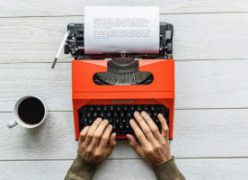 I’m doing my second round of edits, and also re-writing the last five chapters.  Have a sneak peek at Bridget’s story.  Keep in mind this is only my second edit pass.  I usually do up to five or six passes.

Adam leaned against the wall and folded his arms.  He’d made sure not to smoke outside so he wouldn’t stink like burnt tar and tobacco, but he sure could use a cigarette right now.

“You may enter.”  The woman’s supposed invitation came out as an order.  Maybe she used to work at the iron house or had a husband who was a C.O.

He opened the door to a hawk—a birdlike biddy in her sixties with grey hair yanked tight off her narrow face and twisted into a bun.  Beady, cold eyes glared at him.  Her nose, the shape of a beak, she held high in the air.  She even moved her head like a bird while pointing her skinny finger at the chair in front of the desk.

“You may sit.”  She lowered her hard gaze to a pile of papers and started writing.

Adam sat.  The chair was positioned to accommodate an average-sized person.  Even when he opened his legs, his knees pressed against the hard oak of the desk.  Maybe this was part of her strategy to make him uncomfortable.

“I’m Mrs. Dale.  Your son’s caseworker.”  She kept writing on the pad, her scrawny knuckles a bright red from how hard she gripped the pen.

She must want him to speak first.  He cleared his throat.  “I’m Adam Guimond.  Kyle’s father.”

“I already know who you are and why you’re here, Mr. Guimond.”  The Hawk kept writing.  “I’ve been responsible for your file since your incarceration.”

Double great.  This old biddy had it out for him.  Adam kept his arms unfolded.  He stared at her twisted bun.  He wouldn’t look anywhere else.  He wouldn’t shift in his chair.  If this was a test to make him uncomfortable, she could hand him his winning ribbon because she’d already lost.

After five more minutes, and Adam refusing to twitch, The Hawk looked up.  Maybe she realized her tiny plan hadn’t worked.  She laid aside her pen.  Her skinny fingers rested on the papers.  “Why are you requesting approval to see your son?”

Huh?  Adam hadn’t expected this question.  He continued to stare at her narrowed eyes tucked behind matching glasses.  “He’s my son.”

“I know he’s your son, a son you lost to care, because you not only abused alcohol, but also committed a serious crime while under the influence of alcohol.  Tell me, why are you requesting approval to see your son?”

Okay, she’d made a damned good point.  He’d cut the old biddy some slack.  The twelve steps, the Seven Grandfathers teachings, and the anger management course he’d followed while in the iron house had prepared him for this moment.

“Saved up enough money working on day parole.  Gonna use the coin to rent a small apartment.  Got a plan.”

“What plan would that be?”

“Mr. Guimond, you are going to have to be specific and find your tongue to speak a bit more.  We are talking about the welfare of your child.”

He knew what they were talking about.  She didn’t have to remind him.  She wanted his life story?  Fine.  He’d bore the old bat to death.  “You got the info on me.  I got a plan in the pen.”

“Yeah.  Got my grade twelve.  Went to twelve step meetings.  Was part of the aboriginal healing program.  Took my anger management class while I was on day parole.  It was my plan.  To change.  Become a true dad to my son.”

“This is why you relocated to Thunder Bay for the second time from Winnipeg?”

“Why else do you wish to reside here?”  Her eyes narrowed.  “As I said, you’d better be more specific and talk.”

He was talking for crying out loud.  And he wouldn’t shift in the chair even though his legs itched to move after being pressed against the desk this long or make a fist since her annoying stern voice was under his skin, scratching him.  “After my last rubbie bit, I dropped my colours—”

Fine.  He’d prove he knew how to speak properly.  He’d aced English while finishing his high school diploma.  “During my second last incarceration, the mother of my kid told me she was pregnant.  I wanted a better life for my son, so I stopped drinking and left the gang.  Went to rehab.  My back was against the wall.  No protection anymore.  Other gangs wanted a piece of me still.  Moved here to start a better life.  I didn’t wanna get in anymore trouble.”

“But you did when you first lived here with your son…”

“I know I did.  I shouldn’t have moved back to the ’Peg—I mean Winnipeg—after things fell apart here.  That was a big mistake.”  A very big mistake.  Some of his old enemies had been let out of the iron house, and of course they’d come after him.

“Then why did you move back, again, if you knew trouble awaited?”

“It was a mistake.  Like I said, things fell apart here.”

“You mean your ex-fiancée, who’s been responsible for your son for almost four years now, ended your engagement and you couldn’t handle the rejection.”  Mrs. Dale half-smile was part sneer and part triumph.

“Bridget had every right to do what she did.”  Adam would prove he could take responsibility for his screw-ups.  “I started drinking again, so she gave me the boot.”

“What about your drinking now?”

“Kept sober while doing my time.  Attended twelve step meetings at the jail in Winnipeg.  A guy from the outside came in and chaired them.  I’m still sober.  First thing I did when I got into town was check where all the meetings are.  Attending one tonight.”

“And when your parole term is finished?”

“I don’t plan on going back to drinking.  I’m done with that.”

Mrs. Dale clucked her tongue and crooked her narrow brow in a we’ll-wait-and-see manner.

He’d prove her wrong.  He’d prove everyone wrong.  A guy could change.  Problem was, nobody believed ex-cons were capable of changing.

Want to read more?  Stay tuned.  I will post other excerpts up until Redeemed‘s release through eXtasy Books.  Would you like to check out Emery’s story?  Here is a teaser.  Blessed, starring Emery Matawapit and Darryl Keejik is available for purchase.