Today, I’m hosting author Dahlia Donovan’s latest release Farm to Fabre, a contemporary romance.  Be sure to read my review.  And don’t forget to enter the Rafflecopter giveaway.

When Andriana Milne-Marchetti kisses an old family friend under an apple tree, she never imagines he’ll run halfway around the world and stay gone for three years.

Blurb:  Thirty-five-year-old asexual Andie runs a small remote family farm in Scotland. She’s happy with her fruit trees and berries. Her Airedale terrier, Rupert, provides all the companionship she needs.

But her heart longs for one man, who probably never felt more than friendship for her.

Silver fox Docherty Fabre returns home to Scotland, hoping to break through a year-long battle with writer’s block. He’s taking up residence in a tiny cottage on the Milne-Marchetti farm. Now, if he can avoid embarrassing himself for a second time in front of Andie, everything will be fine.

Their second chance at romance comes from a year-long lockdown that prevents them from running away from their feelings.

With no one else around, can they find love in the orchard one more time? 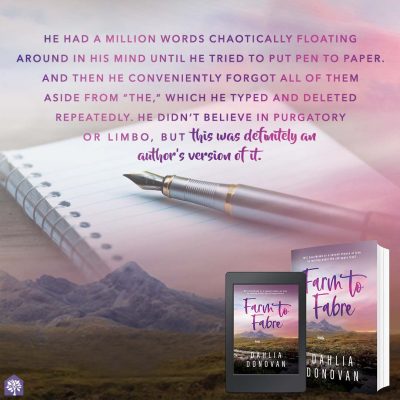 It is time to wake up.

Feel yourself slowly floating to consciousness.

It is time to wake up.

“No.” Andie slapped her hand absently against the nightstand, knocking over her bottle of water while hunting for her phone. She jabbed at it before holding it above her face and then frowned. “What do you mean, you don’t recognise my face? It’s my face. The faceiest of faces. It’s the only one I have.”

Dropping back onto the pillow, Andie scowled in the darkness. Her nonna had forced her to download the calming wake-up app. Unfortunately, it mostly made her feel like she’d joined a cult.

“Fine.” Andie stretched her arm out to flip on a light. “Oh, that’s unnecessarily bright. There. Now can you recognise my face? Thank you.”

She managed to get the app turned off. How was it supposed to help her wake up in a good mood? All it had done was make her want to smash her phone with a hammer.

“Hello, Rups.” Andie rolled over to scratch her farm dog, a four-year-old Airedale Terrier. She’d named him Rupert because he reminded her of a scruffy, grumpy old man.
“Are we ready for the morning? No, neither am I.”

Andriana Milne-Marchetti ran the M & M Farm outside a little village in Aberdeenshire in Scotland. She’d taken over when her parents decided to retire and move to Sicily to spend time with her nonna and nonno. Her mother had wanted to be with her parents, as they were both getting older.

Andie’s father came from old Scottish farming stock, and the farm had been in the Milne family for ages. They no longer had cows and sheep. Her parents had turned it into a fruit orchard when Andie was a little girl.

She adored the farm. It had been her childhood dream to have the run of the place. She had so many ideas, including running a pop-up supper for her friends in the village.

Farm to table, as it were.

Yes, it was lonely on the farm with just Rupert, but she loved it nonetheless.

“All right, you furry fiend, why don’t we see what we can scrounge up for breakfast?” Andie checked the date on her phone and cursed. “Is it already the fourteenth? Doc’s going to be here today.”

Docherty Fabre was a family friend. He’d lived in the village for a while before deciding to travel. Something had happened to him, though.

Her father had called her a few weeks back, asking if she minded if Doc stayed at the farm. They had a small shed that had been converted into a living space. Nothing fancy. Just a bedroom and a bathroom. Andie had immediately invited him to stay for as long as he needed.

And I’m going to regret it when I can’t handle my embarrassing crush.

Nope. Don’t think about it. Hopefully, the more you ignore it, the easier it’ll become to pretend nothing’s there.

If I don’t mention the awkward kiss under the apple trees, maybe he won’t either.

Probably won’t, since he ran off like a bloody coward. 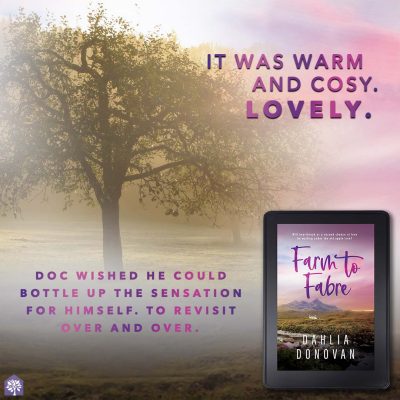 As soon as I read the blurb, I wanted to read.  This is a sweet novel full of friendship and love.  The heroine, Andie, is someone any reader would befriend.  She’s a hard worker, a bit of a recluse, and enjoys the companionship of her dog.

Then there is Docherty aka Doc.  He’s a writer and is also autistic.  People aren’t his forté, but he’s always found comfort around Andie, something that he fears.  But his writer’s block directs him back to where he ran from.  Now he’s at Andie’s farm.

I enjoyed how there weren’t any bitter feelings on Andie’s part.  She simply wants Doc to give them a second chance.  She knows she’s asexual, and a partner is what she longs for.

Doc begins a journey of discovery—about himself, Andie, and their budding relationship.

It’s a short read but beautifully told month by month, with each character getting a chance to express themselves in the third person.

The dog Rufus adds much enjoyment and comic relief.  He also shows the reader how caring Andie is, and he’s a big help to Doc.

I recommend you give this sweet story a read.  It goes beyond romance and focuses on the connection of two souls rediscovering each other on the deepest level.   Do yourself a favour and get a copy.  You’ll also find out why it’s called From Farm to Fabre.

Dahlia Donovan wrote her first romance series after a crazy dream about shifters and damsels in distress.  She prefers irreverent humour and unconventional characters.  An autistic and occasional hermit, her life wouldn’t be complete without her husband and her massive collection of books and video games. 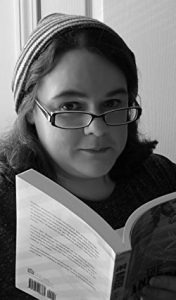 Enter for a chance to win a $5.00 Amazon Gift Card.
a Rafflecopter giveaway