Today, author Carol A. Guy is guesting.  She’s talking about her latest release The Silent Victims, book five in the Crescent Falls series, a mystery.

Taking the Plunge…Into the Deep End by Carol A. Guy

I fell in love with the mystery genre when I read my first Agatha Christie novel at the age of sixteen. My mother, who was an avid reader, preferred mainstream fiction, but there was something about the puzzle-solving aspect of a good mystery that grabbed my attention and my imagination.  Right then and there I decided I’d be a published author someday.

But, alas, life got in the way and like many women did in the 1960s, I put aside ideas of a career, got married and had a family. I continued to read, of course, going through many mystery authors’ offerings including Dame Agatha’s. When my kids hit their teenage years, I had more time on my hands so I decided to try my hand at writing and see what would happen. Well, what happened is I got an article published in The Ladies’ Home Journal. It was about sexual harassment, a hot topic in any decade.

Getting that article published gave me the courage to try my hand at my real love…mystery writing. You know, sometimes you have to go after the dream, even if you’re afraid of failure.  Many best-selling authors have had enough rejection slips to paper a wall, before they got that big break. At least that’s what I told myself, as my own rejections began to pour in.

When my world changed and I found myself divorced after almost 20 years of marriage, I decided I needed to take my life in another direction. I moved out of state and landed a job as a newspaper reporter in Myrtle Beach. Believe me, I was shocked. Here’s where I need to interject that when I interviewed for that reporting job, there were three younger prospects in the room with me. The person doing the interviews was a staff editor. He tested us on our writing capabilities and asked questions. At the end of the interview, he asked if one of us would be willing to cover a school board meeting the next evening, since he had a scheduling problem.  Boy, the excuses began to fly around like confetti from my three “competitors.” That’s when I realized that the interview wasn’t quite over. The most important question had just been asked. I volunteered and, once I wrote the article, got the job along with a byline.

Landing that job, gave me the confidence to continue writing what I really loved – mystery fiction.  But once again, life threw me a curve ball. Fast forward a couple of years and I was living in Columbus, Ohio, working a day job at a hospital and writing in my spare time.  Sometimes tragedy strikes when you least expect it and that’s what happened. My former boss at the hospital, who also had become a good friend, was murdered two weeks after she and her teenage grandson moved out of state. Yep, you guessed it, the grandson killed her. Not so much a who-done-it, but a gripping story of hatred and revenge.  I wrote a book about the crime, not for the money or publicity, but because I felt her story deserved to be told.

In the years since then, I’ve achieved my dream of getting my mystery fiction published. Today, I realize that the challenges along were really necessary learning experiences.

I often wondered if a talent for writing was shared by any of my relatives.  That question was answered for me one warm autumn afternoon many years ago. It appears that my great-aunt Georgia was a poet. I didn’t know this until I was rummaging through the treasures in my father’s attic and happened across an old leather box. Inside that box were a collection of poems Aunt Georgia had written. As I read them, I realized they were actually a chronicle of her life as a young woman. In rhyme she wrote about her mother and father–my great grandparents–her sisters (one of whom was my grandmother), her first lover, her husband, Jim, and finally about their only son, lost all too soon.

I remember Aunt Georgia from my childhood as a small woman with a sweet smile and rosy cheeks. Sometimes when we would visit my grandmother’s house for Sunday dinner, Georgia and Jim would join us. For some reason, they didn’t often mix with the rest of the family, so I guess it stands to reason that she never shared her poetry with them. But decades later she shared it with me in that dusty attic.

Georgia never got her poems published and I doubt she ever gave that a thought as she took pen in hand. But now those “poems in the attic” are my legacy, and if I could talk to my aunt today, I would tell her how much they mean to me and how glad I am that she shared my love of writing. 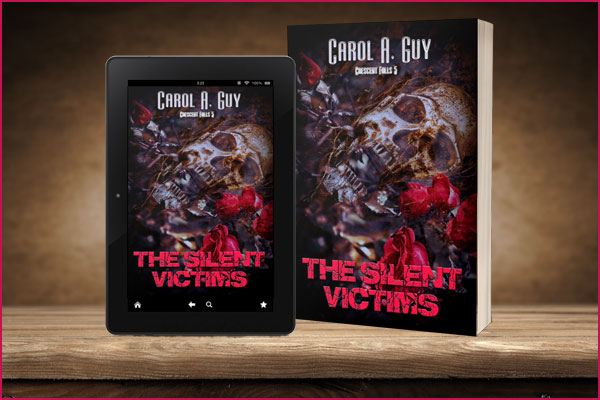 A dead hooker, a missing minister, a skeleton unearthed in the mayor’s back yard, and an attack on the town librarian…once again Crescent Falls is besieged by murder and mayhem.

Blurb:  It’s July Fourth and the citizens of Crescent Falls are ready to celebrate the occasion. The public park has been transformed into festival central with food tents sponsored by local churches, music provided by the high school band, and a carnival midway with games and a dunking machine.

Amateur sleuth Adelaide McBride and her fiancé Vernon Dexter are ready to work a shift at the ice cream tent, sponsored by their church. The newly formed Crescent Falls Auxiliary Police Force, made up of volunteers, will be keeping the peace. But when a murder victim is found in the woods adjacent to the park, the celebration comes to an abrupt halt.

Chief of Police Daniel McBride already has a missing person’s case on his hands. Reverend James Preston mysteriously disappeared a week ago and all efforts to find him have failed. Now, Daniel is faced with the brutal murder of a woman he recognizes as Felitia Mason, an out-of-town escort, employed by Lillian Hayes, someone Daniel became infatuated with during a past investigation. Will his continued fascination with the intriguing escort service owner endanger his relationship with Officer Judy Hess, the woman he claims to love?

To make matters worse, days later a skeleton is unearthed in the mayor’s back yard and many dark secrets from the past bubble to the surface.

When the town librarian is attacked in the same manner as the escort, Daniel realizes some of his cases could be connected.

With his mother, Adelaide, lending a hand, Daniel hopes to unravel both twisted cases and find justice for the victims. But little does he realize the price some of those involved will have to pay.

Felitia crept into the two-story frame house on tiptoe. A nightlight in the foyer helped dispel the gloom. She hurried up the plushly carpeted stairs to her room, slipped inside and closed the door, locking it behind her. Only then did she dare turn on a small lamp sitting on the antique dresser.

She tossed her purse on the bed, went to the beverage cart under one window and poured a double shot of whiskey. Her hands shook so badly that some of the liquid spilled down the front of her red silk dress. She slid into the nearby easy chair, its soft folds molding to the shape of her body. After taking another sip of the drink, she leaned her head back, closed her eyes, and remembered….

“Things can’t go on like this. You know how I feel about you,” she pleaded.

He stared down at her with a look of displeasure. “I thought we agreed you’d never come here. We can’t be seen together.”

“I don’t care. You’ve been avoiding me since I told you—”

“You need to leave. Someone might walk in.” He grabbed her arm and tried to force her toward the front door.

“No!” She wrenched herself free from his grasp and faced him again, looking up into those enticing blue-green eyes. He’d lost weight lately, a fact he laughingly attributed to all the exercise he got during their lovemaking. “You said you loved me. Were you lying?”

“I can’t discuss this here. I’ll call tomorrow and set up a time.”

“Bought and paid for, right? You’ll talk to me when I’m on the clock!” In tears, she fled the building and hurried to her car.

She brought her mind back to the present. The truth was hard to face. He’d never be able to give her the life she wanted—a husband, children, nice home—a normal existence without financial worries. As the liquor soothed her frayed nerves, she began to consider options and the possible opportunity she’d been accidentally handed that evening.

Maybe if I play my cards right, I can at least get out of this business and be free to live the kind of life I deserve…with or without him!

Carol’s love of writing dates back to her teenage years, when she pounded out her first short story on a portable typewriter her father gave her as a birthday gift. She became a fan of the mystery genre at the age of 16 after reading her first Agatha Christie novel.

Fast forward to the adult years, when a year-long stint as a newspaper reporter while living in Myrtle Beach, South Carolina added to her desire to pursue a writing career. Along the way, while working various day jobs in the health care field, she had several articles and a short story published, as well as a true crime book.