Today, I have author Donna Del Oro in the interview chair.  We’re discussing her latest release Saving La Familia, book one in the La Familia series, a romantic suspense.  Be sure to read my review.  And don’t forget to enter the Rafflecopter giveaway.

1. Any weird things you do when you’re alone?

Donna:  I sing to myself. One time I was walking along a rural road in East Texas and singing aloud some of my chorus songs. A bunch of cows and horses came trotting up to the fence so I gave them a concert. They didn’t applaud (ha) but appeared thoroughly engrossed.

2. What is your favourite quote and why?

Donna:  “To thine own self be true, and as surely as the night follows the day, thou canst be false to any man.”—Shakespeare, Hamlet, Act. 2, Sc. 2. The Old Bard said it all.

3. Who is your favourite author and why?

Donna:  Right now, my favourite author is the British suspense writer, Ken Follett. I’m learning a lot from him!

4. What, in your opinion, are the most important elements of good writing?

Donna:  Keeping the suspense going for the entire book!

5. Where did you get the idea for this book?

Donna:  From my childhood as a bicultural, Hispanic child surrounded by a large, raucous Hispanic family. 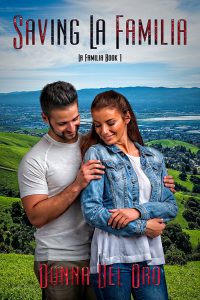 Blurb:  A romantic suspense comedy set in Silicon Valley, a young Latina teacher, Dina Salazar, is asked by her Mexican-born grandmother to rescue her cousins from a dangerous Mexican drug cartel. After all, her stern grandmother tells her, she is the “smart one” in the family. To do so, she has to recruit help from her hated ex-fiance. What’s a girl to do when “la familia” calls?

SAVING LA FAMILIA by Donna Del Oro, about a latina teacher who’s recruited by her Mexican-born grandmother to save her cousins from a dangerous Mexican drug cartel. It’s a romantic-suspense comedy with many “buen dichos”!

The book is free during the tour.

It took five years—six, counting my teaching credential— to work my way through college and, oh yeah, I lost my fiancé along the way—according to Mama and Abuelita, my only chance at happiness. Their idea of happiness meant you married young, spent the next twenty years changing diapers, cooking and cleaning for a man you seldom saw because he was working two or three jobs to pay for all the mouths you’d brought into the world…

Horrors, in my opinion.

That was the world they knew, anyway, and they didn’t have the imagination to picture me in another, I suppose. I had another vision of the world. And myself. After all, I was Dina Salazar, not Dolores—the rambunctious little girl I used to be, saddled with what I thought to be a horrible name and all it implied. I was certain my family considered me the smirky smartass, the brazen wise-ass. No matter what, I was going to scratch and crawl my way into the American middle class, and if I lost whatever family status I had or whatever love came along, so be it.

After all, according to them, I had una cabeza dura. Hard- headed. And they were right.

Delores “Dina” Salazar must aid a cousin she’s never met who is escaping the clutches of a drug cartel in Mexico.  To help her cousin, Dina needs the assistance of her ex-fiancé, a man she despises after he cheated on her during their engagement.

Yes, I’ll admit, finding out why the ex-fiancé, Rick Ramos, got dumped did disturb me a little.  And it might bother some readers, even trigger some, but I forged on, wondering if he could redeem himself, not only in Dina’s eyes, but in my eyes.

First off, I really adored Dina.  She is nothing like her traditional family, so she lives with her Aunt Flora, another woman who bucks tradition (and even dates a much younger man), and I thought these two ladies were enjoyable to read about.  Dina is a devoted teacher who went away to university to be able to teach children who require extra assistance in school.  She’s fiercely independent, kind, caring, and best of all, she’s hooked on golf (did I mention I love golf).

Rick, after many years apart from Dina, has settled into running his father’s contracting business.  He’s accepted and owned the mistakes he made in the past by caring for his daughter, after he divorced the woman that he cheated on Dina with.  And he’s worried about his daughter’s schooling enough to enlist Dina’s aid in helping Angelina overcome her learning problems.

I gotta admit I liked Rick.  As a matter of fact, I found it baffling he cheated on her since he possesses a lot of honour, he’s a hard worker, and a devoted father.

There are also many scenes that include the Dina’s family that I enjoyed, and a mystery that Dina’s grandmother shares with her.

The novel has romance, some suspense, and funny moments.  Since the narration is told in first person POV, I enjoyed Dina’s voice, as if she was telling her story instead of the author.  Well done.  The novel gets deep in some places, but also remains light.  It’s truly about a family, a black sheep daughter, and everyone coming together to aid the cousin.  I found this to be more than a romance, but a nice look into a Mexican-American family’s life.

I recommend giving this novel a read.  It’s a great look into Latin culture, and the heroine is easy to root for.  As for Rick, well, I’ll simply say Dina made the best decision for her, and her decision was something I accepted and respected.  Do yourself a favour and get a copy. 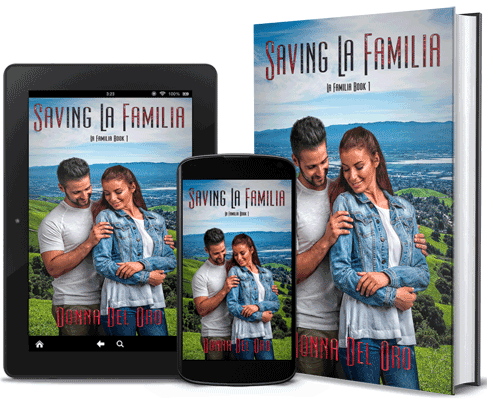 Donna Del Oro lives in Northern California with her husband and three cats. She taught high school and community college English classes for 30+ years and is now happily retired. When not doing research, writing novels, or reading voraciously, she travels and sings with the medal winning Sacramento Valley Chorus.

Donna is a member of Capitol Crimes, the Sacramento chapter of Sisters in Crime in addition to the Valleyrose chapter of the RWA. She has judged RITA entries and does developmental editing on the side. Two of her novels, Operation Familia and Born To Sing, have won national and international awards.

Enter for a chance to win a $50.00 Amazon or B&N Gift Card.
a Rafflecopter giveaway