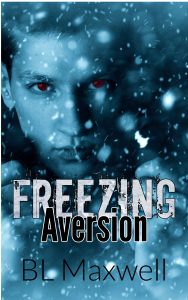 A Tracker who can find anyone except the mate he’s always craved.

Blurb:  Benjamin Coulton is a tracker employed by the Consortium, the ruling counsel of vampires. When he’s sent to investigate a rogue vampire killing indiscriminately in a remote region of Alaska. Bad weather hampers his effort and he loses the vampire he’s been tasked to find.

Leon Davis and his friend Brian agreed to be winter caretakers for several cabins and a fishing lodge, thinking it would be easy money. They settle into their daily routine of checking the cabins for animal break-ins, or broken water pipes, and prepare for a long winter.

Until a run in with a vampire changes everything. Ben finds a newly turned vampire left for dead by the rogue vampire, and suddenly Ben’s mission changes course. In the freezing wilderness of Alaska, he uncovers more truths and the mate he’d always longed for… and now the killer vampire is tracking them.

Note:  It’s the second book in the Consortium Series but it is a standalone story.  It does not end on a cliffhanger.

Letting my senses guide me, I came upon a small grouping of cabins that surrounded a lake, just like the sign promised. It was so far removed from where I’d turned off the main road that I couldn’t believe there could be a human out here. But there was.

I was slammed from behind and tumbled toward the ground but managed to land on my feet before spinning to face whatever had attacked me.

Before me crouched a vampire who appeared to have been feeding to the point of being blood crazed. He had no control over his instincts at this point and was consumed with the need to feed, and by the way he bared his teeth at me, he didn’t know any better than to try to feed on me. His face was partially hidden from view by the hood of his jacket, and what looked like a stocking hat pulled down low.

“Stand down, vampire, or I will end you.” I readied for his attack that I knew would come. He was far past caring about consequences and believe me, there would be consequences.

He snarled and attacked; grabbing my hair and running up the trunk of a tree, he ripped my head back. Twisting around, I tore myself from his grip and stood on his back as I pressed him into the snow.

“Get off me or you will die.” He fought, even though he knew he would not win. The madness that overtook him left him unreasonable to a point he would not be saved, and I grunted as he heaved me off him and against a tree.

He was up in a flash charging at me again. “Must feed,” he screamed, his hands curled into claws as he charged. I spun as he reached me and pulled the knife from my waistband. Though it only left him off balance for a split-second, it was enough to give me the advantage. When he attacked again, I spun the knife and plunged it into his heart. It wasn’t enough to destroy him, but it would injure him.

He screamed in pain before running off into the woods. Fuck, why did it always have to be so hard? 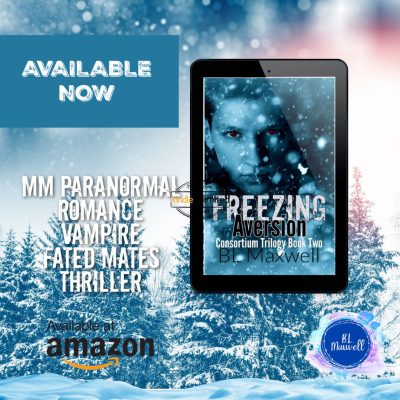 Although the book is part of a series, it can be read as a standalone.  There are hints of backstory from the previous novel that gives the reader a good idea of what happened in the previous book.  As for Freezing Aversion, this is strictly Ben and Leon’s story that takes place in Alaska, and I love a good Alaskan story!

Benjamin Coulton is a tracker for The Consortium, a counsel of twelve powerful vampires who rule the vampire world.  They have tasked Ben to find a rogue vampire who is causing havoc in Alaska.  When Ben arrives, he finds a newly-turned Leon, something Ben wasn’t expecting, and showing his compassion and responsible nature, he helps Leon, which I thought was a great touch to Ben’s character.

I found the novel to be a romantic suspense, because there is so much going on.  Lots of action and even mystery.  This kept me turning the pages, wondering what would happen next.  I won’t say who the rogue vampire is, or how the rogue relates to the story, lest I spoil the novel for other readers.  I will say I loved what Ben found out about the rogue, and other things about his own vampire kin.

There is also an addition of a mystery vampire named Joel who makes an appearance halfway through the novel.  Again, I won’t say whether this vampire is good or bad, but I enjoyed the extra addition that also kept me guessing.

There aren’t strong character arcs for Ben or Leon, other than Leon adjusting to his new life as a vampire, but this was a smart move on the author’s part because it’s a 50K read and the story was concentrated on the finding of the rogue vampire.

This is a wonderful read with strong writing.  I recommend you purchase yourself a copy.  It’s a great take on vampire romance.

BL Maxwell grew up in a small town listening to her grandfather spin tales about his childhood. Later she became an avid reader and after a certain vampire series she became obsessed with fanfiction. She soon discovered Slash fanfiction and later discovered the MM genre and was hooked.

Enter the Rafflecopter Giveaway for a chance to win a $10 Amazon card. 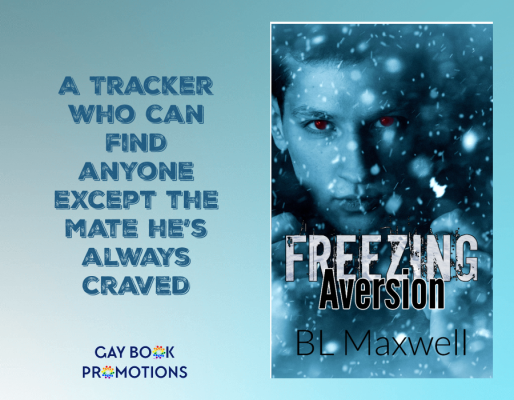