My father and I were forever swapping books.  Call Me Indian by Fred Sasakamoose is the last book Dad gave me before he passed away in July.  He said reading Mr. Sasakamoose’s story was like reading his own, so after putting off this book for a couple of months, I finally decided it was time to delve between the pages and find out why my father identified with the author’s story. 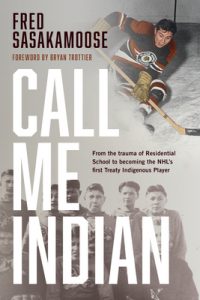 Trailblazer. Residential school Survivor. First Treaty Indigenous player in the NHL. All of these descriptions are true–but none of them tell the whole story.

Blurb:  Fred Sasakamoose, torn from his home at the age of seven, endured the horrors of residential school for a decade before becoming one of 120 players in the most elite hockey league in the world. He has been heralded as the first Indigenous player with Treaty status in the NHL, making his official debut as a 1954 Chicago Black Hawks player on Hockey Night in Canada and teaching Foster Hewitt how to pronounce his name. Sasakamoose played against such legends as Gordie Howe, Jean Beliveau, and Maurice Richard. After twelve games, he returned home.

When people tell Sasakamoose’s story, this is usually where they end it. They say he left the NHL to return to the family and culture that the Canadian government had ripped away from him. That returning to his family and home was more important to him than an NHL career. But there was much more to his decision than that. Understanding Sasakamoose’s choice means acknowledging the dislocation and treatment of generations of Indigenous peoples. It means considering how a man who spent his childhood as a ward of the government would hear those supposedly golden words: You are Black Hawks property.

Sasakamoose’s story was far from over once his NHL days concluded. He continued to play for another decade in leagues around Western Canada. He became a band councillor, served as Chief, and established athletic programs for kids. He paved a way for youth to find solace and meaning in sports for generations to come. Yet, threaded through these impressive accomplishments were periods of heartbreak and unimaginable tragedy–as well moments of passion and great joy.

This isn’t just a hockey story; Sasakamoose’s groundbreaking memoir sheds piercing light on Canadian history and Indigenous politics, and follows this extraordinary man’s journey to reclaim pride in an identity and a heritage that had previously been used against him.

I always enjoy a good non-fiction read, especially hearing a story from an Indigenous person.  Just like my older family members, Fred, too, was sent to the Indian Residential School.  And being in this place had a huge impact on his life that he shares in this book.

Being Ojibway, I enjoyed hearing from a Cree person.  While reading, I would smile now and then because the customs and languages are similar in some respects, but also very different.

What I especially liked was how he took responsibility for the mistakes he made and didn’t put the blame anywhere but on himself, very similar to my fathers’ own life story.  Although Fred suffered much pain from the schools and being robbed of his time with his family, he had a lot of determination to succeed, and wonderful people who believed in him.

I think many Indigenous people will identify with him when it came to leaving the reserve to pursue a career in hockey.  My heart went out to him because of the homesickness he faced, especially after being robbed of his family while growing up.  Now he was, again, far from the one place where he could find solace and peace, thrust into a world he didn’t know much about, and with people who were quite different from him.  But he made many friends.  He took a lot in stride.  And through it all, he carried his heritage proudly.

His journey is one where he keeps pushing forward after learning and correcting the mistakes he makes along the way.  It was really nice to see him work so hard to become the person he wanted to be:  father, husband, friend, and hockey player.

The book is heavy in hockey, but the enthusiasm he writes with tells the reader how much passion he has for getting to lace up his skates and hit the ice.

In the book, he mentions his story always ends when his NHL career ends.  For me, I was grateful he kept going after he returned to his reserve.  I wanted to hear the rest of his story and how life turned out for him.

His voice isn’t chatty, like some memoirs, because he doesn’t strike me as a chatty sort of person.  He is a great conversationalist, but there is a nice serious undertone when he speaks that is reminiscent of my late father.

I recommend giving Fred’s memoir a read.  It’s a deep look into a man’s life, a man full of fear, full of hope, full of anxiety, and full of regret.  I especially loved the props he gave to his wife who was the backbone of their marriage and family.

Call Me Indian is a wonderful story that gives a wonderful satisfactory ending, even though Fred did experience many heartaches and pains.  It’s a story of life and how to make the most of dire situations.

Have you read Call Me Indian?  If so, do you agree with my review?  If you haven’t read the book, would you be willing to now?