Today, I’m hosting Cameron Allie and revealing the cover for her upcoming release Love Spells, Full Moons, and Silver Bullets, book one in the Clayridge Chronicle series, a paranormal romance.  Don’t forget to check out the excerpt.

What do you do when your ex boyfriend’s werewolf boss wants to feast on the mortal you’ve sworn to protect?

Quinn was unaware of the love potion her meddling cat dumped into her tea, so when Ian Hannigan ends up injured on her property, she thinks she’s dealing with another mortal, not the man who can help mend her heart. Her life becomes a balancing act as she attempts to keep him safe, while hiding secrets better left buried.

In a realm filled with things that go bump in the night, Ian didn’t expect to find security and happiness in the arms of a green skinned witch, yet for the first time since his parents tragic car crash, he’s found some measure of peace. The rumours he hears in Clayridge aren’t pleasant, but Ian knows there’s more to Quinn than what people would have him believe. If he’s placed his trust in the wrong hands he’ll be paying with more than just his heart. He’ll pay with his life.

“You didn’t have to send your….” Alec paused, a grin in place as he seem to search for the right word. “…pet. Is that what the mortal is, Quinn? A pet?” Before Quinn could jump to Ian’s defense, Alec kept going, every word stoking a fire in her. “You’ve never kept a mortal before. That’s not like you. Getting a little bored and lonely way out here by yourself?” He used his hands to brace himself on one of her Muskoka chairs, leaned closer, and whispered suggestively, “I could have helped you with that.”

Quinn blinked, then narrowed her eyes. He was baiting her. “Cut the bullshit. What do you want Alec?”

His shoulders slumped and he released an exaggerated sigh. “You Quinn. I’m here for you.”

“Aww,” she said with as much sarcasm as she could muster. “Let me just kick Ian out and you can come on in.”

“Your sarcasm is noted. Give me a chance Quinn. We could be great.”

“Could have been great. Past tense, Alec.” Turning to her fire, she dismissed his offer. “You’re the one who walked away.”

He was stealthy when he moved. His hands came to rest on her shoulders as his lips caressed her ear. “I still remember the way you feel, the look on your face when you come.”

The creaking of her front door told her that Alec’s overfamiliarity hadn’t gone unnoticed by their audience. Quinn spun away from him. “Well, you should forget it. What happened between us is over and there’s no going back.”

He was silent for a long moment. Behind him the door to the cabin closed again. Inside the curtain fluttered. She hoped they couldn’t hear the conversation. Maybe Lucifer had directed Ian to a different activity to keep him occupied.

Finally, Alec met her gaze. “I never stopped loving you.”

Seventy-five years ago a confession like that would have made her weak in the knees. Even in the height of their passion he’d never told her he loved her. She’d been the only one to utter those words, and then he’d crushed her silly infatuation. Grandma had warned her. The pack always came first.

With her grandmother’s voice in her ear, she straightened her spine and took a deep breath. “What do you want, Alec?”

She saw his jaw clench, in that same way it had whenever he had to do something he didn’t want to. But like a good little beta he followed orders. “Draven wants the mortal.”

Hands on her hips, she stood immobile. “No.”

Quinn huffed. “Oh, this ought to be good.”

“You give up your pet and I promise you’ll never be alone again.”

“Because you’ll stay with me?” She laughed. “Is that it? That’s Draven’s big trade? You for the mortal?”

That jaw, the one she’d once kissed and fawned over, clenched even harder. “Come on, Quinn! Think this through. You get what? One year with your mortal. Then he’s going back through that portal. Okay, maybe he stays. Best case scenario you get what? Sixty years before he’s worm food.”

Quinn swallowed. She didn’t want to think about that. Of course she’d out live him, but what about all the time they’d have together. They could both enjoy that.

“How long afterwards would you renege on your bargain? How long before Draven calls you back to the fold?” She crossed her arms over her chest, and stepped closer to the fire. “I’d rather die alone in this cabin than spend eternity with you.”

His jaw tightened so much that Quinn worried he’d break his teeth. Baring those pearly whites, he snarled, “Careful, Quinn, or you’ll end up a bitter old hag just like your grandma.”

“Get off my property!” She waved her hands, shooing him off the platform. “Get lost or the next time you transform you might just find yourself turning into a toad. A great big fat one with warts.”

Alec snickered, and stopped his backward momentum. “You always were a spitfire, Quinn.”

She was unprepared for his next move. With wolf-like reflexes he grabbed her arms and pulled her to him. Her chest hit his with such force her breath flew from her. His lips crashed against hers. In an instant she pushed him, shoving him with all her strength.

If not for his animal agility, he would have fallen on his ass, but instead he landed stealthy on his feet. “Think it over, Quinn. We were amazing once. We could be again.”

“I’m not turning him over to be slaughtered like some lamb.”

All traces of humor and anger fled his features. With severe sobriety, Alec’s gaze drilled into hers. “Seriously, Quinn, watch out. Draven is relentless in this. He will get your mortal. I don’t want to see you get hurt in the process.”

His concern was worrying, and as Quinn watched his retreating back she had to wonder just how far Draven would go in his attempts to get Ian. Her land was protected, and when he was with her she’d keep him safe. The town was secure enough, but still Alec’s visit was alarming.

Quinn doused the fire with a few shovelfuls of snow, before marching to her cabin.

Once inside she ripped off her boots and tossed her cloak on a peg. She stalked across the floor, tossed the rug aside and using a chant, unlocked the safe hidden in a compartment beneath the floorboards. She lifted out an old six shot, double barrel revolver, two pistols with double-stack magazines, and a sack filled with gold coins, setting it all on the floor before closing and securing the safe. Next she went to the cabinet near the door that housed her rifles. Unlocking it she pulled out a long barreled rifle. She set each one down on the counter top next to the mug of coffee that Ian had been sipping from when she’d walked in the door.

“You know how to shoot?”

Lucifer leapt onto the counter. “Me too. What’s going on? I didn’t think that kiss was shotgun worthy.”

Straightening, Ian glared. “He kissed you?”

Quinn checked the chamber of the revolver, stalling as she thought through her answer. “He’s my ex, and he’s not the one I’m worried about. The kiss was not welcomed.” Her gaze was hard when she repeated. “Do you know how to shoot?”

“No.” He looked down at the guns. “Who are you worried about?”

Ian’s face paled. “The one who slashed me?”

Nodding, Quinn looked away. “He’s going to come after you, and we need to be ready.” She glanced at Luce. “Can you apologize to any customers that might come by today? Ian and I need to make a shopping trip.”

“We’re not going to town.” She pocketed the sack of gold. “We’re going to see a dwarf about some silver bullets.” 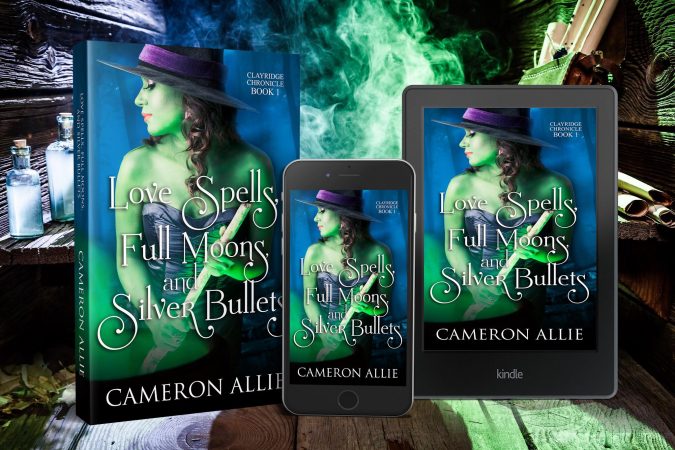 Romance author Cameron Allie grew up in a small town north of Toronto. As a child she loved stories, and after reading her first romance novel at age fifteen, her dreams of writing became singularly focused on the love story. She is currently living in Ontario with her husband, their young daughters and with their cat, who is constantly trying to interrupt the writing process.