Today, author Kyra Jacobs is guesting at my blog.  She’s here to talk about her latest release Blue Manhattan, book one in the Moonlight Mayham series, a parnormal fantasy romance. Don’t forget to enter the Rafflecopter giveaway.

Hello everyone! Today we’re bringing you a round of speed dating with Shayla Tempest and Jamie Knight, the main characters in Kyra Jacobs’s latest paranormal romance novel, BLUE MANHATTAN. So get comfy and scroll on, their interview is about to begin…

Host: Shay and Jamie, thank you so much for joining us today. Why don’t we start out with each of you telling us a little about yourselves?

Shay: Oh, good. Man, it’s getting tougher trying to avoid humans. Hell, I had this one come crashing into our bar a few months back. Was sure I’d get blamed for that one.

Host: Wait, so…is Jamie supposed to know about us?

Jamie: You can say that again. And for the record, it was Mauri who told me to go find Shay. Otherwise, I would have steered clear of McGronkle’s Pub. That first night, it was all I could do to open the door, let alone step inside.

Shay: *grumbling* Shouldn’t have been able to step past the spells I put around the bar at all, but then…well, we don’t want to get ahead of ourselves.

Jamie: Right. So, yeah, me walking into McG’s as a human? Not my favorite memory. Before that, the craziest I ever got was intentionally messing with the other programmers where I worked. Inserting decoy bugs in code can be a really fun prank.

Host: *laughs* I take it you’re not into the techie life as much as Jamie?

Shay: No. Like, not at all. Besides, who needs gadgets when I have magic?

Jamie: True, but not every supe has the treasure trove of spells you do, darling.

Host: Oh? Can you tell us a little about your magic?

Host: Really? Not even a litt—

Host: *looks to Jamie, who gives a subtle head shake* Okaaaay then. Well, let’s get to our speed round of questions, shall we? I’ll ask a question, you both give me your best answer. Sound good?

Jamie: Ha! Just don’t ask what she likes to top them with. *makes gagging face*

Shay: *punches Jamie in the arm*

Host: I’m going to take your advice on that one Jamie, and move to question two—favorite vacation location: beach, or cabin in the woods?

Shay: Cabin in the woods, far away from water. Far, far away.

Host: Not a fan of water, huh? I’ll take that death glare as a ‘no’. Right. Question three—favorite color?

Host: *reads note, which advises not to mention green or any shade of it* Interesting. Okay, final question—favorite drink?

Shay: Fire water, but only if I make it.

Host: *laughing* I guess I should have seen that answer coming. Well, that’s all the time we have for today. Thank you both SO much for joining us. Tell me, what do you have in the works next?

Jamie: Hmm, don’t think it’s wise to elaborate on our current mission, but let’s just say we’ve got some work left to do to keep Mauricio Hunter and his creepy goons from succeeding at his crazy world domination ideas. Lucky for us, our reinforcements have arrived. Oh, that’s Tessa calling now…

Shay: *sighs* That woman needs to learn how to relax. And learn how to trust me. Seriously, she’s not the kind of partner I would have picked. Hmm, judging from that look on Jamie’s face, I’m guessing we need to be on our way. Nice chatting with you, though.

Host: Trust me, the pleasure was all mine. If you’d like, I can show you two out.

Shay: *raises one hand, finger pressed to her thumb* Nope, I’ve got this. Come on, Jamie.

Host: *finds self alone in the studio* Wow, I wish everyone had that power. Thank you, my dear audience, for joining us today. I hope you enjoyed meeting Shay and Jamie, and be sure to check out their adventures in BLUE MANHATTAN. Kyra Jacobs assures us the duo will continue to make appearances throughout the series, though next up is a new pair of main characters with all new magical abilities. Until next time, stay safe and happy reading! 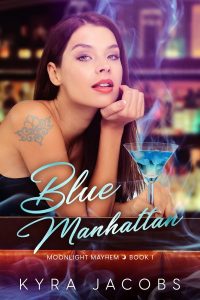 Bartender Shayla Tempest wants nothing more than to stay out of trouble. Oh, and to kill the supernatural mob boss who’s stolen her sister. So, when Mauricio Hunter demands Shay deliver some “special package” in exchange for her sister’s life, this supe masquerading as a blue-skinned witch doesn’t hesitate to agree. Until, that is, she learns the package is one that’s completely off-limits for her kind: a human.

Computer programmer Jamie Knight just wants to finish debugging his latest app. But some douche bag named Mauricio has kidnapped his girlfriend, and now Jamie’s dodging dangerous mythical creatures in a race against time to pay her ransom. His only hope? One seriously stubborn witch who’s blue, scary powerful, and sexy as hell.

With an unexpected attraction brewing between them, this unlikely duo will break every rule in the supernatural underworld to complete their rescue mission. But something far more devious than kidnapping is on Mauricio’s true agenda, and the erlking will stop at nothing to get what he wants. Do Shay and Jamie have what it takes to thwart his plans without losing themselves—or each other—along the way?

Soap suds rose from the hot tub in the bar’s front corner, and distracted Shay from the fire water she’d been making. A lick of yellow bit her hand as she bobbled the glass, sending flames dancing across the bar top. Four nymphs sharing a nearby stool took wing to avoid the fiery cascade, a litany of curses filling the air. Shay cursed as well, reaching for a washrag to clean up her spill before it claimed any casualties.

“Dammit Floyd, what the hell are we paying you for?”

Their mile-high waste-of-fur bouncer perched beside the door bristled. “What’s your problem, Blue?”

Her cloth snagged on a crusty spot, and she lifted it to find a chunk of charred wing. Okay, strike that—claim any more casualties. She cast a dark look to the yeti. “You are. Thought you patted the water kelpies down when they were paying their cover?”

She tipped her head toward the growing mound of bubbles and Floyd’s gaze flicked toward the tub. With a muttered expletive, he slid off his personalized tree stump and strode toward the thickening scent of lavender. At ninety-five, the guy believed he was the best thing to come along since the invention of glamouring. Maybe in another hundred years, he’d lose the ego and Shay would be able to tolerate the pompous jerk.

No, probably not even then.

He had just made it to the kelpies when the front door burst open and a body stumbled through. A human body, judging by the way he was gasping for breath. Usually, they hit the wards and made an about-face. So far, this guy wasn’t that smart.

“We’ve got ourselves a crasher,” Milo crooned from a nearby booth, his scaly green lips drawing back to reveal teeth that desperately needed a good brushing. Like, a few decades ago.

The goblin slid his arm free of the drunken fae nestled beside him and started to rise. But a brawl was the last thing they needed tonight, especially with that package due to arrive from Mauri. Shay abandoned her washrag and strode forward, giving him a not-so-subtle shove down along the way.

“Keep your shirt on,” she said.

She snapped her fingers, freezing the little bastard in place. Goblins—always trying to be the tough guys. Her spell wouldn’t hold him long, but it did allow her enough time to give their newcomer a onceover. He looked to be just over six feet tall, long and lean. Not overly muscular, but not an ounce of fat on the guy, either. Nothing she couldn’t handle if good old Floyd chickened out again. Why he got so nervous around humans was beyond her. This one’s dark hair was short on the sides and a little longer on top, just like all the pretty boys on posters in Time Square. As she stared, a pair of melted chocolate eyes began to scan the room.

Gods, he was repulsive.

Snickering ensued as Shay continued forward, stopping before she emerged from the shadows. Best not to give him too big a fright, or their crasher would soon be a fainter. Fainters always made the griffins hungry, and she’d be damned if she was gonna jump in the middle of a herd of them to save clueless Joe Blow here.

“I think you’re lost, city boy,” she called. “Best turn around and head back to Upper Manhattan.”

He squinted in her direction and lifted one hand to shield his eyes from the entryway lights, a piece of crumpled paper in its grip. “Violet. I’m looking for Violet. They took her from me.”

His breathing was beginning to smooth; not a good sign. If he acclimated to the wards, he’d soon be able to see them all just as they were—a bar full of creatures he wasn’t supposed to know existed. Shay put a little more venom behind her words.

“Don’t know nothing about none of that. Now leave.”

The human unwadded the note in his hand. “No? Then how about a…Storm? She’s supposed to know where I can find her.”

Oh, no. No, this guy could not be the package.

A human, Mauri? Are you out of your friggin’ mind?

The newcomer squared his shoulders. “Well if they’re not here,” he said, voice rising above the bar’s standard bedlam, “then somebody better bring me that son of a bitch Mauricio Hunter. Right. Now.”

The entire tavern fell silent as every head turned to see what fool had said aloud the name of Antinomy’s most notorious mob boss. From the Barbie Dream House, cracking knuckles could be heard.

Then all hell broke loose. 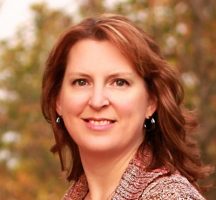 Kyra Jacobs is an extroverted introvert who’s always called Indiana home, so she’s well-versed in fickle weather, pork tenderloins that don’t fit on a bun, and sarcasm. Putting her Indiana University degrees in Public Management to good use by day means Kyra does the bulk of her writing late into the night. Fueled by caffeine and funny memes, she weaves tales of love and relationships, including the humor and/or chaos both can bring. Kyra’s published novels range from sweet contemporary romance to romantic suspense and paranormal/fantasy.

When this Hoosier native isn’t at a keyboard, daydreaming through her fingertips, she’s likely outside, elbow-deep in snapdragons or on a sideline somewhere cheering (loudly) for her sporty sons. Kyra also loves to bowl, tries to golf, and is an avid college football fan. Be sure to stop by kyrajacobsbooks.com to learn more about her novels and ways to connect with Kyra on social media.

Enter for a chance to win a $20.00 Amazon Gift Card.
a Rafflecopter giveaway