Elizabeth:  I like romance and happily ever after endings. My first published story was my rewriting of Cinderella, and it appears in my book. I found I have a knack for writing sexy scenes, and I enjoy it.

4. Why did you write this book you are featuring?

Elizabeth:  Because it makes you feel good! 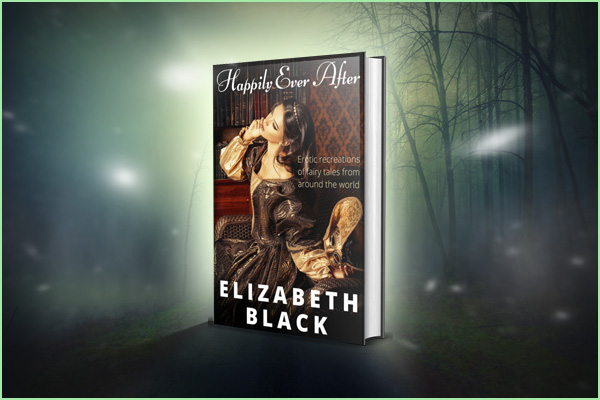 Blurb:  Acclaimed author Elizabeth Black is back with a collection of steamy retellings of your favorite fairy tales, but beware, not every ending is a happy one! Reinventions of Cinderella, Thumbling, The Three Billy Goats Gruff, Snow White, Little Red Riding Hood, The Little Mermaid, The Pied Piper, Peter Pan, and The Shoemaker And The Elves round out this remarkable collection.

She stood in the dining room, dressed in the sheer pink lace nightgown she has picked out especially for the occasion, and wailed.

Twin beacons from the tapered candles cast soft light on the food that cooled on the table. Slabs of pheasant, fresh asparagus spears, an opened bottle of their best Bordeaux – all gone to waste. At her instruction, the servants had placed freshly laundered and pressed silk sheets on their bed. Frankincense wafted around their bedroom, preparing the lovers for an exciting evening of hot sex. All for nothing. She’d sleep alone tonight.

Why hadn’t that blasted Fairy Godmother told her that life after slipping on that glass slipper and jewel-encrusted wedding ring would be so skull-numbingly dull? Where was the “happily ever after” she’d been promised?

She had taken the time to order a lovely dinner, just for her and her Handsome Prince but he couldn’t spare the decency to stay long enough to eat. She went out of her way to prepare a sensuous evening alone, just for the two of them, and what had he done? He’d run out to grease up the stocks again. He’d rather spend his day torturing peasants than making love to her.

What had she gotten herself into? Why hadn’t she thought ahead instead of placing all her focus on fitting her foot in that damned slipper? She hadn’t realized that by marrying the prince, she was marrying the entire kingdom. That included the neighboring louts … sorry, princes … and the spiteful old Queen Mother. That woman was more frightening than Cinderella’s own stepmother and stepsisters. To her horror she realized she missed them. Her Prince never disobeyed his Mum. That woman had the final say in everything.

When her Prince wasn’t ‘administering the law’ he was out hunting with the neighbors, a pack of ill-mannered ruffians with the temperament of a mud wasp. He spent far more time getting drunk with them than he ever spent with her.

Worst of all, he sucked in bed. After shooting his wad, he would turn over, snore his way into Slumberland, and leave her lying on her back, twitchy and frustrated, her disheveled blonde hair around her head like a sunburst. She should press charges against that Fairy Godmother for breach of contract and product misrepresentation.

Despite his faults, her Prince valued her opinion on matters involving the Kingdom. They enjoyed long walks in their garden. He could be an attentive husband when he put his mind to it. For those reasons she loved him, but evenings like this one tried her patience.

Cinderella grabbed a bread roll in one hand and threw it into the fire. Cinders flew in the air. Wood sparked and sizzled as much as she did. She wailed. She pulled her hair. She stomped her feet. She banged her fists on the table, making the grapes jump in their silver bowl.

“If you don’t stop that incessant racket, I’ll tie you up myself.”

She snatched up another roll, whirled towards the voice which was opposite the fire and pitched the bread with all her strength. The man who caught it without effort was so luscious she caught her breath.

Six feet of muscle, sinew and cheeky attitude stood before her. His long mane of blond hair was tied from behind in a black velvet ribbon. A triangular black velvet chapeau tipped jauntily on his head. A brocade and velvet coat in paisley colors, predominately emerald green, draped across strong, broad shoulders and muscular arms. Long, muscled legs were wrapped in tight black cloth pants and tall leather boots. His grin was so broad that it creased the corners of the brightest blue eyes Cinderella had ever seen.

He was definitely not from the neighborhood.