Today, I have award-winning author Jessica James in the interview chair.  We’re discussing her latest release Duty Bound, book one in the Shades of Gray Civil War Serial Trilogy, a historical fiction title.  Don’t forget to check out the excerpt.

All About Shades of Gray:

Jessica:  There are a number of scenes that still make me laugh out loud when I read them — and a few that bring tears to my eyes as well. I don’t have a favorite.

2. If you had to do it all over again, would you change anything in your book?

Jessica:  No. It’s been re-written so many times, I think I have it the way I want it now.

3. What do you love most about your two main characters?

Jessica:  They are both strong and independent.

4. What makes you want to shake your two main characters?

Jessica:  They are a little too stubborn for their own good.

5. If you could spend time with one character from your book, who would it be? And what would you do during that day?

Jessica:  Colonel Alexander Hunter. We would ride across the rolling hills of Virginia.

6. Did the characters hijack the story or did you feel like you had control of your book?

Jessica:  They absolutely hijacked the story. I had no idea where it was going, but they took the reins.

7. How did you come up with the title for your book?

Jessica:  Two reasons. One, because Gray is the color of the Confederate uniforms.

But more importantly, it’s because of the difficult choices that were made throughout the book. There were no black and white, easy answers — only shades of gray. The characters have to follow their hearts.

8. If your book was made into a film, who would you like to play the leads?

Jessica:  I’ve never been able to figure that out. They would have to be able to portray two very strong-willed people with deep convictions.

9. If your book was a candle, what scent would it be and why?

Jessica:  Timberland…something woodsy and earthy because the both of the main characters are strong, outdoor types.

10. If your book had a theme song, what would it be and why?

Jessica:  The theme song from the move Gettysburg because I listened to it over and over while writing it, and because it is so moving and stirring.

Jessica:  Bluish Gray…the colors of the North and South mixed together, and the color of the main character’s eyes.

12. If a reader asked you why they should read your book, what would you tell them?

Jessica:  Readers should read Shades of Gray because they will be entertained while learning many things they probably didn’t know about the American Civil War. I get emails all the time from people who don’t read historical fiction, but loved Shades of Gray.

13. What can we expect from you in the future?

Jessica:  I also write suspense/thrillers and I will be working on a new contemporary novel in the future.

1. Tell us about your writing process.

Jessica:  I write best in the mornings and don’t write the book in order. I write chapters as they come to me, and then put them together.

2. How much research goes into your books?

3. What do you enjoy most about writing?

Jessica:  Being able to work independently and be creative.

4. What do you enjoy least about writing?

5. You can only recommend one of your novels to a reader, which would you choose from the books you’ve written so far, and why?

Jessica:  The complete Shades of Gray Trilogy. It’s an emotional ride that I think most readers would enjoy. I receive emails all the time from readers who can’t forget it, and read it again and again.

6. What novel was your personal favourite to write, and why?

Jessica:  Meant To Be, which was my first romantic suspense novel. It almost wrote itself, which is why it’s called Meant To Be. (And it also went on to win numerous awards)

1. Readers know about the writer you, but what about the everyday you?

Jessica:  I love horses and history. I work part-time as a stagehand at a local theater as a way to stay physically active.

2. What is something unique/quirky about you?

Jessica:  I have to have complete silence while writing.

3. What are some of your pet peeves?

Jessica:  People who are late for appointments.

4. Where were you born/grew up at?

Jessica:  My family is from the Gettysburg area and that is where I still live.

5. Describe yourself in five words or less!

1. What book do you think everyone should read?

Jessica:  Any of Vince Flynn’s novels.

2. What fiction genre(s) do you read the most?

3. Share your favourite character from a book that you’ve read, and why they are your fave.

4. On average, how much do you read every week?

Jessica:  I read mostly non-fiction for research. One book a week. 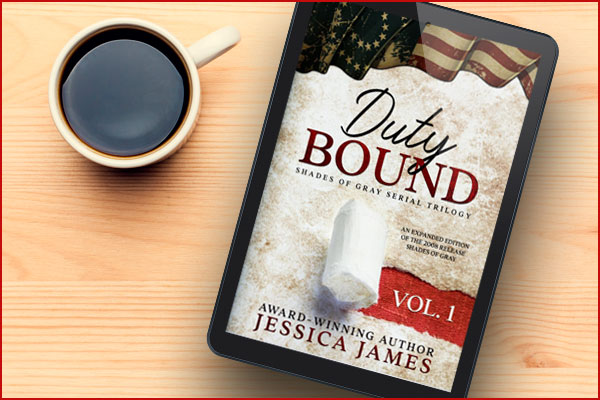 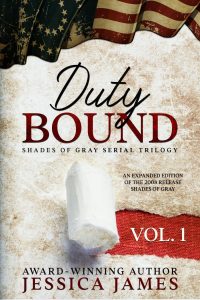 Can two tenacious foes find common ground in the midst of a war?

Blurb:  Honor and conviction clash with loyalty and love in this poignant Civil War tale that pits brother against brother. Readers will discover the fine line between friends and enemies when the lives of two tenacious foes cross by the fates of war and their destinies become entwined forever. A classic tale of courage, honor, and enduring love that has been praised by both men and women—from professors of history to avid romance readers.

Duty Bound: Takes readers across the rolling hills of Virginia in a page-turning tale of action and adventure as a Union spy spars with a renowned Confederate cavalry commander. Gallantry and chivalry are put to the test when Colonel Alexander Hunter discovers that Andrea Evans is not only the woman he promised his dying brother he would protect, but is the Union spy he has vowed to his men he would destroy.

Note:  Author Jessica James uniquely blends elements of romantic and historical fiction in this deeply personal and poignant tale that, according to one reviewer, “transcends the pages to settle in the very marrow of the reader’s bones.” Winner of numerous national awards, James has received critical acclaim for this page-turning Civil War saga.

A piercing bugle blast preceded the sound of galloping horses by mere seconds. Confederate cavalry Captain Alexander Hunter tore his eyes away from the horse and rider he pursued and focused on the Federal cavalry unit that had appeared out of nowhere to pursue him.

This was not the first time the large black steed with its agile rider had been spotted in advance of a Union assault—but Hunter swore today would be the last. Signaling his men to scatter, he spurred his mount toward the forest where his foe had disappeared. His band of warriors took off in every direction, their escape aided by a roiling mass of dark-bellied clouds that launched their own assault.

With the storm as an ally, Hunter knew the Federal cavalry would not sustain the chase. He didn’t worry about his men who were familiar enough with the land to evade the enemy no matter the weather. He only cared to find the Yank who’d led him into the trap so the rascal could be punished.

Hunter lowered his hand to one of the revolvers on his hip as he entered the dimly lit forest. Damn that scoundrel. The timely arrival of Union reinforcements over the past few months could no longer be considered a mere coincidence. It was time for this cunning adversary to pay for the disruptions he’d caused.

Guiding his mare through the underbrush and around fallen trees, Hunter soon lost hope of finding his antagonist in the dense foliage. The rider had a habit of appearing, only to disappear into thin air. Even today when he’d thought the elusive character was within his grasp, Hunter had instead found himself in another trap.

The distinctive sound of a rambling creek replaced the hushed patter of rain, pulling Hunter from his thoughts. “How about a drink, ol’ girl?” He urged his mare forward, leaning low over the saddle to avoid tree limbs, and then jerked on the reins at the sight of a youth crouched on the opposite bank gulping water by the handful. Hunter’s gaze shifted to the horse hungrily grazing on green shoots at the brook’s grassy edge. Enormous and coal black, its chest glistened and frothed from being ridden hard.

Hunter reached for his revolver and blinked to make sure the fading daylight was not playing tricks on his vision. At this distance, the enemy scout was smaller and younger than he expected. He cocked his weapon and shouted across the fast-moving stream, “Don’t move!”

Startled, the youth stood and challenged him. “What do you want?” he asked, holding nothing but dripping water.

Hunter’s confusion intensified as he stared at his opponent. Dressed in an oversized coat, slouch hat pulled low, and baggy trousers, the boy looked harmless enough. Can this really be the Union scout I’ve been chasing?

One more glance at the horse answered his question. Few such horses existed in this part of the country, certainly none of such quality that had not already been confiscated by one or the other of the armies. This was no guiltless civilian. This was a Yankee. And a cunning one at that.

“I think you know what I want. It appears we’ve spent the last week watching each other, and we still have not been properly introduced.”

Hunter urged his mare down the steep bank to a sandbar, but hesitated. The creek was not wide, but the swift-running current and slippery rocks made fording here treacherous.

“If I may offer you some advice, sir?” The youth stood calmly by the water’s edge. “This is not a safe place to cross. If you go right down there—”

He pointed helpfully downstream, but Hunter interrupted. “Thank you for the suggestion…” He urged his horse forward into the ice-cold water as he talked. “But I’ll not leave here without the scoundrel who’s been reporting my movements to the enemy.”

Hunter attempted to keep his eye on the youth while guiding his mount through the maze of rocks in the streambed. About halfway across, he saw the boy bolt to his grazing horse and gather the reins. Reacting instinctively Hunter fired a shot, causing his mare to lose her footing and plunge to her knees.

The panicked animal struggled a moment before bounding up with a great surge of strength, knocking him off balance. As Hunter tried to regain control, the mare lunged again, this time unseating him and sending him sailing backward.

Hunter felt himself falling, seemingly in slow motion, until there came a skull-cracking thud and a blinding flash of light.

Jessica James believes in honor, duty, and true love—and that’s what she writes about in her award-winning novels that span the ages from the Revolutionary War to modern day.

She is a four-time winner of the John Esten Cooke Award for Southern Fiction, and has won more than a dozen other literary awards, including a Readers’ Favorite International Book Award and a Gold Medal from the Military Writers Society of America. Her novels have been used in schools and are available in hundreds of libraries including Harvard and the U.S. Naval Academy. 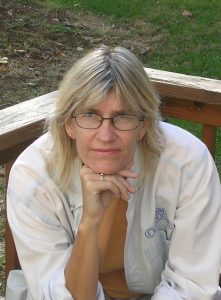