Today, I’m hosting author A.M. Salinger and her latest release Drake, book five in the Twilight Falls series, a m/m contemporary romance.  Be sure to read my review of this novel.  And don’t forget to enter the Rafflecopter giveaway.

At the age of twenty-eight, Roman Campbell has the world at his feet. Young, successful, and brutally beautiful, his facade of an uber-cool rockstar hides deep scars that have tormented him for years. After finally putting the pieces of his broken life back together, Roman attends the wedding of his famous movie star friend Carter Wilson in Twilight Falls, where he meets Drake Jackson. Their attraction is instantaneous and Roman hooks up with the sexy builder for one intoxicating night.

Having put behind his difficult childhood, Drake Jackson is content with his life. His one regret remains his lost chance at a relationship with his childhood friend Alex. After a torrid encounter with Roman at Carter’s wedding leaves Drake hungry for more, the builder believes he will never set eyes on the famous rockstar again. But when Roman buys the property Drake had long coveted in Twilight Falls right from under his nose and hires Drake as his contractor, Drake realizes trouble has come to find him with a capital T.

Sparks fly and the two men soon commit to a temporary arrangement that sees them satisfying their carnal desire for one another. But when Roman’s past comes crashing back into his life and his secrets are revealed, Drake finds himself experiencing a lot more than just desire for Roman. Will Drake finally accept the feelings growing inside his heart? Or will he reject Roman’s love and repeat the mistakes of his past?

Join Drake and Roman in this wildly addictive fifth installment inTwilight Falls, the new series by the author of the bestselling, contemporary, gay romance series Nights.

Content Note: this book contains sensitive content that may be upsetting to some readers. Please refer to the page at the start of the book for more information.

Drake Jackson watched the man with the mocha eyes stiffen.

He’d clocked the guy an hour ago, just before the wedding ceremony. From the buzz that had danced through the crowd when the stranger had walked into the enchanting woodland clearing where Carter and Elijah had decided to get married, it seemed he was an A-list celebrity of sorts.

Though his face was vaguely familiar, Drake hadn’t been able to put a name to it. He wasn’t someone who made it a life goal of keeping up with entertainment news. There was, however, no denying that the stranger was drop dead gorgeous.

The wine-red tuxedo the guy wore hinted at a lean, toned build and his flawless, cream rose boutonnière contrasted prettily with his honey-colored skin. Silver studs decorated his earlobes, highlighting the beautiful Phoenix tattoo rising up the left side of his neck.

The man was alluring in the kind of way that brought to mind satin sheets and a dark room that smelled of sex.

Hot Guy twisted his full lips in an irritated moue. “Do you make it a habit of eavesdropping?”

Drake’s gaze lingered on his mouth.

The Guard Dog’s expression went from annoyed to disgusted in a heartbeat. “Hell no! And FYI, we are not a couple.” He cocked a disparaging thumb at Hot Guy.

It was Hot Guy’s turn to scowl. “Hey! You think you’re too good for me, asshole?!”

The Guard Dog arched an eyebrow. “I know I’m too good for you, kid. Besides, your tastes in the bedroom leave something to be desired.”

Drake’s curiosity deepened. It was clear the two men were close friends. It was also apparent the Guard Dog was used to keeping Hot Guy on some kind of leash.

“Just because you like to do it missionary style doesn’t mean my sexual preferences are indecent,” Hot Guy snapped. “And you’re only six months older than me.”

Guard Dog rolled his eyes at that. “How do you know the grooms?” he asked Drake gruffly.

“I’m one of Carter’s childhood friends.”

Hot Guy straightened on his stool. “Oh. You’re from around here?”

Drake downed the rest of his beer and smiled laconically. “Yup. Born and raised.”

It was all he was willing to say on the subject. The folks of Twilight Falls knew of his sordid family background. He saw no reason to inform a couple of perfect strangers about it too.

“Ah.” Understanding dawned on the Guard Dog’s face. “Are you one of those Terrible Seven I’ve heard so much about?”

Interest sparked in Hot Guy’s eyes. “Oh yeah. Carter mentioned something about that a few times, didn’t he?” He arched an eyebrow at Drake. “So, you and Carter were in some kind of gang?”

“If you call spray painting the principal’s car a racy red when we were in middle school gang-like behavior, then, yes.”

The Guard Dog smiled. “I’m James. James Lang. I’m an old friend of Carter’s from L.A.” He offered his hand to Drake.

“You probably know who this troublesome guy is.” James indicated Hot Guy.

James blinked. He burst out laughing in the next instant, the sound drawing the stares of several of the guests.

Hot Guy looked conflicted, as if debating whether to be shocked or offended.

“Well, I’ll leave you two to get to know one another.” James patted Hot Guy’s shoulder, a mocking grin pasted across his face. “Don’t do anything I wouldn’t do,” he said on a parting shot as he headed into the crowd.

Hot Guy turned until he was facing the bar once more. He twisted his glass a couple of times before knocking back his drink. “You really don’t know who I am?” He glanced sideways at Drake.

Drake dragged his gaze from Hot Guy’s lips and throat.

Even the way the guy swallowed was sexy.

“No,” he admitted quietly. “It’s kinda refreshing, to be honest.”

Drake waited. When it became clear the man was not going to offer his name, he waved the bartender over.

“Could I have another beer? And he’ll have—” He raised an eyebrow.

Drake suspected there was a story there.

The bartender brought their order over.

“Are you in town just for the wedding?” Drake asked lightly.

“Yeah. James and I are heading back to L.A. tonight.”

Drake toyed with his beer bottle. “What your friend said earlier. Was it true?”

Drake deliberately lowered his gaze to the man’s mouth. “Are you looking for a good fuck?”

Drake looked up and saw desire darken the man’s eyes. His own pulse quickened.

He wasn’t sure what had gotten into him. He wasn’t the kind of guy to hook up with a stranger. Although he’d had his fair share of one-night stands in the past, these days he preferred short affairs that ended by mutual agreement. He wasn’t made for long term relationships, something he made clear to anyone he intended to sleep with.

Maybe it’s because of the wedding.

Seeing Career and Elijah get married so soon after Alex Hancock tied the knot with Finn West only reminded Drake of the painful fact that he was the one member of the Terrible Seven destined to remain single. It didn’t help that Alex was the person he thought he might have committed to being in a relationship with one day. Except Drake had been too much of a coward to admit this to him. By the time he realized how much Alex meant to him, his friend had left Twilight Falls for San Diego.

Although seeing Alex with Finn had hurt at first after the lawyer returned to town, Drake was glad that his former lover had found someone he wanted to spend the rest of his life with. Alex deserved to be happy, as did Finn.

“What are you saying?” Hot Guy said hoarsely.

Drake decided honesty was the best course of action. “I have zero interest in starting something serious. If you’re in the mood to have some fun, I’d be happy to oblige.”

“Are you sure you can satisfy me?”

Drake’s cock roused at the open challenge on the other man’s face.

“Why don’t we go somewhere private and find out?”

I always enjoy a good m/m romance, so when the opportunity came to read and review a book with the “friends with benefits” trope about a rock star, I jumped at the chance.  I haven’t read the previous books in the Twilight Falls series, though.

First off, the two main characters are very likeable.  Roman is a rock star who’s on a break and in the midst of buying a house at Twilight Falls.  He’s managed to bury the past, or so he thinks, and he’s looking for a fresh start after overcoming alcohol and drug addiction.

As for Drake, he’s lived in Twilight Falls his whole life and has his eye on the house that Roman buys.  Of course, Drake’s pissed about it.  He’s been saving hard to purchase the place.  But he’s talked into doing the renovations.

It’s lust at first sight for these two.  They are at a wedding when the two meet.

I didn’t mind the instant attraction because it sets the ball rolling for the plot of the story.  Both aren’t looking for a relationship, and both have their reasons.  Each also has their fears to overcome.

I liked the character arcs for Roman and Drake because they needed one another’s help to overcome the obstacles in their paths so they could each live a full and healthy life.  This was well executed.  The sexual tension between them was also very realistic and well done.  If you enjoy lots of sex scenes in a novel, then you’ll enjoy Drake, because there are plenty of them.

The setting is also nicely described without becoming too detailed.  I like when an author lets me use my imagination during reading.  The dialogue is realistic.  The deep third POVs from Drake and Roman are naturally them.

The only quibble I had was the enormous cast of characters.  I found it overwhelming and even a bit confusing.  It was nice to meet some of their friends, but I felt that there were too many scenes with these friends.  I get it.  You naturally meet the friends of someone you might be getting serious about, and at times friends provide help with problems, but I wanted to focus on Roman and Drake and their wonderful character arcs.

With that quibble aside, Drake is a wonderful novel with two awesome male leads.  At times the pacing does lag, but it doesn’t detract from the story.  The novel is an enjoyable read.  The author is a talented writer.  Drake is a book that I recommend. 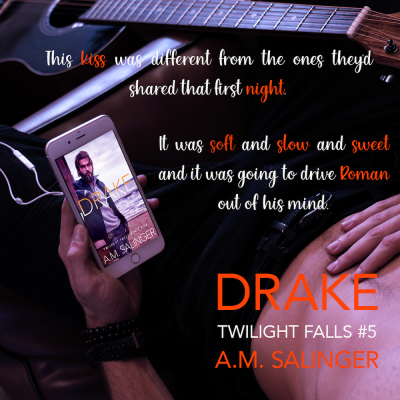 A.M. Salinger is the pen name of an Amazon bestselling author who has always wanted to write scorching hot contemporary romance and M/M urban fantasy. In 2018, she finally decided to venture to the steamy side. NIGHTS and TWILIGHT FALLS are contemporary M/M romance series written as A.M. Salinger. In 2021, she launches FALLEN MESSENGERS, her first M/M urban fantasy series written as Ava Marie Salinger. When she’s not dreaming up hotties to write about, you’ll find Ava creating kickass music playlists to write to, spying on the wildlife in her garden, drooling over gadgets, and eating Chinese.

Want to be the first to know about Ava’s new releases and get access to exclusive content, sneak previews, sales, and giveaways? Then sign up to her Reader Group here and join her VIP Facebook Fan Group here. 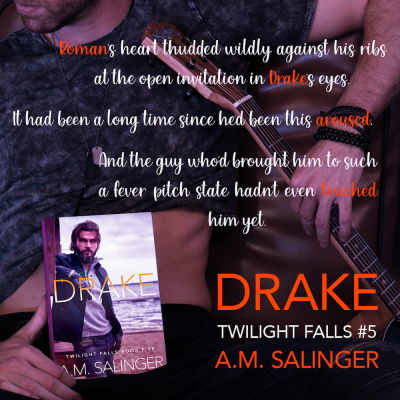 30% off when you purchase directly from eXtasy Books