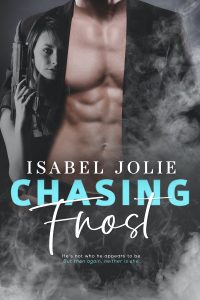 He’s not exactly who he appears to be. But then again, neither is she…

I’ve never felt as out of my league as I did when I met Sydney Frost.

Not in the years I’ve spent starting successful companies or since. Working for a prestigious firm gives me status and power, and I’m already a master at charming my way through a crowd—or into the bedroom. One new office colleague should be a piece of cake to win over.

Ms. Frost, however, is giving my efforts a chilly reception. Time to remind her that I’m not afraid to live up to my name, either…

On the surface, it looks like I have it all: a new, influential job, a nice salary, and the hottest young executive in the company falling over himself to introduce me to the best New York City has to offer.

My name is Sadie Keating, not Sydney Frost, and I’m an undercover agent for the FBI on a case that could make or break my career. Chase Maitlin, my sexy and persistent would-be suitor, is the prime suspect in a major cross-agency investigation.

I’m the rookie desperately trying not to fall for him.

Note:  Chasing Frost, the fifth book in the West Side series, is a steamy, enemies-to-lovers, sometimes funny, sometimes suspenseful, contemporary romance featuring a smart, dedicated heroine and the sexy bad boy who steals her heart.

All of the contemporary romance novels in the West Side Series are standalone and can be read in any order.

Chase is one of Sadie’s suspects she’s got her eye on.  But Sadie’s got more than her eye on him, she’s also falling for him.  But she’s the FBI agent investigating the company he works for who are up to some nefarious activities.

First off, Chase is a character I really enjoyed.  He’s a bit of a smart aleck, a bit casual, affable, and cocky.  I really enjoyed his scenes.  Since this is a romantic suspense, there’s not much of a character arc.  This is all about the investigation, falling in love, and meeting tons of friends.

I will say I found the tons of friends overwhelming and slowed down the story at times.  I haven’t read the other books in the series, so I wasn’t interested in these secondary characters.  I was all about Chase and Sadie.

As for Sadie, I liked her.  Some might find her cold at times, but I understood her.  She’s a woman in her twenties trying to prove herself on her first big undercover assignment.  Of course, she’s going to be a bit brusque and formal.  She has a lot riding on her shoulders.  Her team is counting on her.  So I’d say the author did a great job painting a woman who’s feeling some insecurity and nervousness.

Sadie also doesn’t have much of an arc, other than she’s on assignment and wanting to nail it.  But that didn’t bother me in the least.  I came for the suspense since I don’t get a chance to read romantic suspense’s too often.

The plot was tight.  The research spot on.  Maybe too spot on at times, because the exposition did slow things down a lot.  I will admit to glancing through a few scenes because I simply wanted to get back to the action and the romance.

The book is heavy in description that could have used some trimming.  All in all though, the author is a wonderful writer.  The dialogue is very realistic.  I especially loved the setting of New York City.

Then there’s the twist at the end.  Brilliant.  Go Sadie.  She is a heroine I think readers will adore, and as for Chase, a hero readers will love.  These two made a great team.  A great romance.  And they made for great suspense.

I recommend Chasing Frost.  The characters are likeable, the plot is awesome, and the POVs are truly Sadie and Chase telling you their story.

Isabel Jolie, or Izzy to her friends, is an Amazon bestselling indie author with an unquenchable thirst for a good, sexy love story. Izzy’s heart pumps faster for stories with strong heroines, down-to-earth realism, and an unexpected twist.

When she’s not writing or reading, she can often be found with a glass of wine in hand relaxing with her husband, daughters, and good friends lakeside.

Izzy fills her Instagram feed with funnies, inspirational “brain candy”, and anything that meshes with her mood of the day. #mood.