Today, author Imogen Markwell-Tweed is guesting at my blog.  She’s talking about her latest release I Know How This Ends, a sweet m/m paranormal romance.  Don’t forget to enter the Rafflecopter giveaway.

Imogen on trying to be original or delivering readers what they want:

I try to be original. Of course, as I write romance, I stick to some of the conventions and tropes. I respect the genre and that means understanding it. So, for example, I’m not going to kill off a character— I write romance, and that means HEA, and that’s what I’m going to deliver. But other than that, I try to just write what I think is good, interesting, and honest to the characters.

Imogen on telling her younger writing self anything:

For the love of God, invest in some decent wrist braces for your impending carpal tunnel. Also, you’re right for refusing to re-learn how to type just to satisfy your high school’s computer teacher. We’re STILL faster than they were! Take that!

Imogen on the average length for her to write a book:

Because I write fast fiction, the turnaround is super quick. I often don’t devout more than five weeks to a novella. I aim for anywhere between 2,000 – 4,000 words a day, and then do a big edit at the end. But my goal is never the most polished or fraught over piece: it’s something sweet, honest, and fun. I definitely know that fast fiction isn’t for everyone, as a writer or a reader, but it really allows me to tell the stories I want to tell, and how I want to tell them.

Blurb: Alone in the woods of West Virginia, Tabbris lives a quiet life. He tends to his garden and communes with the bees and feels the presence of holiness in his every small, humble action. A fallen angel with the ability to see the future, Tabbris tries his best to stay out of humanity’s sight.

In L.A., Daniel is the life of the party. Loud, abrasive, desperate for approval and companionship, Daniel never sits still — and he’s never alone.

When Daniel gets a large research grant to investigate cryptids, he sets off for West Virginia. What he thought would be a good prank and a fun conference paper turns out to be an adventure he never saw coming.

Tabbris’s quiet life is uprooted by a mysterious man falling across the borders of time and into his front yard. Daniel is not supposed to be here! But there’s something intriguing about this man, beyond his surprising appearance and penchant for mythological creatures. When Daniel keeps showing up, Tabbris is plagued by the possibilities that the man ignites in him.

The only problem is that Tabbris can see the future. And he already knows how much pain they have in store. He knows how this ends.

There’s a distinction in Tabbris’s life that can easily be split into two: before Daniel and after.

He didn’t mean for that to happen. But the man’s ability to walk straight into his house, no care or consideration for how he’s slipped between two half fragments of time, is curious. And Tabbris is a lot of things — but he’s curious, firstly.

Daniel comes nearly every day. Sometimes, he brings bread or cakes. Other times, he comes with books or little square devices that play music that Tabbris has pretends to know about. Every day, Daniel comes bearing a small smile that is tenfold felt in the stretching soul in his chest, and every day, he doesn’t ask a single question… well, no questions except:

“Seriously? Seriously. Your name is… Tabbris? Like, your God-given name is Tabbris.”

Tabbris has to bite really hard on the inside of his cheek to keep from laughing at that. Daniel doesn’t understand just how God-given his name truly is.

Tonight, Daniel had shown up later than normal. So late, in fact, that Tabbris had thought perhaps Daniel just wasn’t coming today. They’d only met a week ago and had already spent five days together, and Tabbris was reluctant to admit how disappointed he’d felt when he thought that Daniel wasn’t coming. But then, he did show up, a little drunk and with a six pack of beer, and the delight Tabbris had felt in that was… remarkable, to say the least.

Tabbris has always enjoyed living on Earth. God’s greatest creation — the most bountiful and interesting and plush of all the worlds that Tabbris has ever seen — Earth brought great joy to Tabbris during his extended stay. But he hadn’t realized how little true delight he’d felt on Earth.

In Heaven, God was delight. To be in His presence was always delightful. But Tabbris is only a shadow of an angel now, and this delight is likely only a shadow of that true feeling. Still, it’s more than he’s had in six hundred years, and he’s grateful for it.

Even if the source of that delight is currently laughing at him for his silly, angelic name.

Tabbris doesn’t know what that means. But like most human conventions that he’s unsure about, he merely lifts an eyebrow and makes a low humming noise in his throat that conveys curiosity but not confusion. He’s become extremely practiced with it since meeting Daniel.

“The angel of self-determination.” Daniel clicks his tongue, shaking his head. “Your parents really had it out for you, huh?”

Tabbris tilts his head. Daniel’s nose scrunches as he smiles, and Tabbris wonders if all humanity possesses this ineffable sweetness.

“Quite a rude thing to say,” Tabbris says, tilting his head.

Daniel is unflapped. Tabbris wonders with relative frequency if Daniel is, in fact, just unflappable.

Tabbris tilts his head the other way. Daniel is no less flabbergasting from this angle. “I did not attend middle school.”

He scoots closer and offers Tabbris the bottle. The liquor is brown and thin and smells awful coming from the bottle, and yet, somehow, when Daniel’s breath blows over Tabbris’s face from leaning too close, it smells sweet. Tabbris sways a little, and Daniel sways with him.

Angels can’t get drunk. Or, at least, Tabbris can’t. He never has. He imagines it’s the poison within the alcohol that gets burnt as soon as it enters his bloodstream. He’s spent his fair share of time in taverns, though, and he understands the effects it’s meant to have.

Even if he wasn’t familiar with the effects of alcohol, though, Daniel was displaying them beautifully. His eyes are wide and glossy, and his cheeks flushed the softest pink that not even Tabbris’s garden roses could mimic. His lips are clumsy, and he slurs a word here and there. But his laughter is the same, if a little less grounded in humor now.

Tabbris tries to relax his posture. His shoulders slip, and he manages to feel his spine curl under the released pressure. He can’t quite mimic the correct physiological traits of intoxication, but he thinks his performance is good enough.

He hopes that here, in the solace of night, cradled by alcohol, there is room for truth from Daniel. He hopes that Daniel tells him of himself, because the curiosity is heavy on his tongue, weighing down his every syllable. Despite the visions of past, present, and future that always make up his thoughts, Tabbris sees them for what they are: imitations of reality, like stained glass but nothing more. He doesn’t want to just imagine, regardless of the accuracy. He wants to know. He wants to… feel.

Imogen Markwell-Tweed is a queer romance writer and editor based in St. Louis. When she’s not writing or hanging out with her dog, IMT can be found putting her media degrees to use by binge-watching trashy television. All of her stories promise queer protagonists, healthy relationships, and happily ever afters. 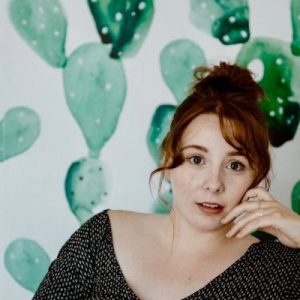 5 thoughts on “Imogen Markwell-Tweed – I Know How This Ends”