Today, I have fellow eXtasy Books author Tim Smith in the interview chair.  We’re discussing his latest release The Big Fall, book seven in the Nick Seven series, a romantic mystery.  Don’t forget to check out the excerpt.

Tim: The opening scene, because it establishes the mood, atmosphere and general tone of the story. It also sets up the conflict, and gives readers a quick introduction to the main characters.

2. If you had to do it all over again, would you change anything in your book?

Tim: Nothing I can think of. I wrestled with this gorilla for nearly a year and if I changed anything, it would ruin it.

Tim: Nick and Felicia formerly worked together in the CIA before being separated when Nick quit, and Felicia went home to Barbados. What I don’t dwell on in any of the stories is their history when they were co-workers. There was a strong mutual attraction which I mention in passing, but I don’t reveal how close they actually were, or what they did during that time. I’m saving that for a future story.

4. If you could spend time with one character from your book, who would it be? And what would you do during that day?

Tim: I could easily lose a day on a Key West beach with Felicia, the female lead. This would be followed by dinner, and watching the sunset over the Gulf with a few Mojitos. Then…who knows?

5. Did the characters hijack the story or did you feel like you had control of your book?

Tim: There were certain points where I had to let the characters dictate how the action would play out, based on their personalities. I knew what I wanted to show, but I had to think how Nick or Felicia would carry it out, especially in some of the romantic scenes.

6. How did you come up with title for your book?

Tim: It’s funny you should ask, because I had the worst time coming up with a title for this one. At one point, I had a list of ten possibilities. I had wanted to write a noir-type story like this and call it “The Big…” something or other. Considering what happens to Nick’s nemesis in the end, “Big Fall” seemed like a good fit.

7. If your book was made into a film, who would you like to play the leads?

Tim: I could picture George Clooney or Michael Weatherley as Nick Seven, because they both have the laidback attitude and sly sense of humor. If you had asked me this 30 years ago, I would’ve said Burt Reynolds. For Felicia, I’m holding out for Khandi Alexander.

8. If your book was a candle, what scent would it be and why?

Tim: Seabreeze, because it reminds me of the Florida Keys and is very relaxing.

9. If your book had a theme song, what would it be and why?

Tim: “The Goodbye Look.” The lyrics and rhythm lend themselves to the mood of the story.

Tim: A pleasing shade of aquamarine, since it reminds me of the waters in the Florida Bay.

Tim: There were a couple of scenes with secondary characters that I deleted, because I felt they slowed the pace. I was able to incorporate the important points from these scenes elsewhere.

12. What can we expect from you in the future?

Tim: I have a holiday romance coming out in December from Extasy Books, and I’m already at work on the novel I want to release next year.

All About Tim Smith:

1. What is something unique/quirky about you?

Tim: Although I love to travel, I can be just as content spending time in my comfort zones with friends and family.

Tim: I’ve had an interest in photography since high school, and I still freelance on occasion. My other interests include home improvement projects, creative cuisine, classic movies, and listening to jazz.

3. What are some of your pet peeves?

Tim: People who don’t follow through when they say they’ll do something. When I make a commitment, I try to honor it, and it bugs me when others don’t. I also get irritated when a person tells me one thing, then says something different to someone else.

4. Where were you born/grew up at?

Tim: I was born and raised in Ohio, and have lived here my entire life.

5. Describe yourself in 5 words or less!

1. What book do you think everyone should read?

Tim: One I keep going back to is “What Makes Sammy Run?” by Budd Schulberg. Even though it was written in the 1930s, the moral of the story still resonates today.

2. What fiction genre(s) do you read the most?

3. If you could have been the author of any of your fave books that you’ve read, which book would you choose and why?

Tim: Probably anything written by James W. Hall. He’s one of my favorite Florida-based thriller writers, and he always tells engaging stories.

4. Share your favourite character from a book that you’ve read, and why they are your fave.

Tim: Phillip Marlowe from Raymond Chandler’s stories. He’s laidback, tough, cynical with a strong moral code, and able to see people for what they really are.

5. On average, how much do you read every week?

Tim: It’s hard to say, but I always have a couple of books I’m reading.

Just when you think life can’t get much better, a crashing wave wipes out your sand castle. Two former spies learn the hard way that karma can be a bitch.

Blurb: Just when you think life can’t get much better, a crashing wave wipes out your sand castle. Former spies Nick Seven and Felicia Hagens are taking a break from Key Largo to visit a casino owned by Nick’s friend, Rock Bianco. An unexpected, nasty encounter with one of Nick’s former lovers turns disastrous when she’s killed shortly afterward. The police and the girl’s wealthy father are convinced that Nick did it, despite the lack of hard evidence. The billionaire industrialist wages an online smear campaign to make Nick look guilty, including sordid details from his past career in the CIA. The stakes become more personal when the fallout impacts Felicia, testing their relationship. Nick fights back, but why is the man determined to hold him responsible for his daughter’s murder? Who really killed her, and why is their identity being shielded? Can Nick and Felicia resolve this crisis and reclaim their idyllic life in paradise?

Nick and Felicia walked hand in hand, barefoot along the water’s edge, the incoming tide washing over their feet. Nick wore an open box-cut shirt that allowed the gentle breeze to keep him cool. He glanced at Felicia’s hips swaying ever-so-sexily under the white mesh throw she wore over her string bikini.

They hadn’t said much about their fact-finding trip or the day’s earlier events. Nick was irritated about being the prime suspect in a crime he didn’t commit, and he knew Felicia was upset, too. When they returned to shore after dinner he had suggested the moonlight stroll as a distraction.

“So pretty and peaceful out here,” Felicia said. “I always liked walkin’ along the beach back home at night, listenin’ to the tides roll in.”

“Do you ever get homesick?”

“Once in a while, ‘specially around holidays and birthdays.”

“Any regrets about staying here instead of going back to Barbados?”

She stopped and looked up at him. “None. Any regrets about askin’ me to stay when that job was finished?”

Nick cupped her cheek with his palm and gazed into her soft eyes. “Not a one. Why would I have second thoughts about making you a part of my life?”

Felicia shrugged. “I thought maybe you had a pretty full agenda, and I wasn’t sure I’d fit into it.”

Nick leaned down and planted his lips on hers, giving her a gentle kiss. “Life was nothing before you came along. Just an endless parade of meaningless encounters.”

They looked out at the ocean. The lights of a cruise ship crossing on the horizon broke up the endless darkness. Seagulls pecked at seaweed that had washed ashore. Sounds of laughter from a nearby group who were clearly enjoying themselves drifted in, along with the unmistakable aroma of reefer.

“Since you brought it up,” Felicia said, “can I ask you somethin’?”

“Your life before we reconnected a few years ago.”

Nick felt his gut clench a bit. Revisiting his past wasn’t something he liked to indulge in very often, preferring to let sleeping ghosts lie. There were enough of them to occupy the world’s largest haunted house at Halloween. He had worked hard at putting that unpleasantness in a vault under double lock and key, with instructions not to open it. He also realized that Felicia was now an integral part of his life, he trusted her, and part of that trust involved candor, no matter how uncomfortable it was.

“This girl they think you killed.”

“You tell me. Were you two very close?”

“How long did you date her?”

Felicia looked at him. “Okay, Mister Tightlips. This is me you’re talkin’ to, not some board of inquiry where you stick to the facts and nothin’ but.”

Nick twirled a strand of her long hair that blew in the breeze. “I’d characterize my relationship with Kristine Overman as a one-night stand that turned into a runaway train heading for a fork in the tracks. Came a point where I had to decide whether to stay on board or jump off.” 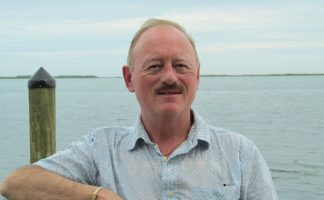