Today, author Marie-Claude Bourque is guesting.  She’s interviewing the hero from her latest release A Vampire’s Spell, book one in The Order of the Black Oak series, a paranormal romance.  Don’t forget to enter the Rafflecopter giveaway.

“So Valerian, tell me more about this witch you met this summer.” I watch him one cold December afternoon, sitting in a booth at the back the Serpent Maudit, his brother’s nightclub in Old-Montreal.

The immortal invited me here for the interview, so I don’t see the cursed vampires he has hidden in the crypt of his sanctuary while they learn to contain their extreme blood hunger so that they can function in the human world without hurting anyone.

Val shoots me a dark look. I see deep emotions raging in his gaze, quickly repressed.

He still wears his heavy outdoor wool-coat, the dark curls of his hair brushing the fox fur collar. Every one of his movement is measured, from the way he levels his chin to look at me casually, to the calm touch that lay on his dog, a hefty chocolate Labrador sleeping with his head on his master’s lap, the animal’s body stretched on the leather bench next to Valerian.

“Of the Coven of the White Holly. In the small town of Berwick Falls in Maine.”

“Your brother Magnovald said you were taken by her,” I pointed. “The first time you saw her.”

Valerian nodded then shrugged. “Maybe. But what does it matter?”

“So, what will you do about that?”

“About her?” He let out a slow breath, his full lips a thin line. “Nothing. She’ll be here for Emmeline.”

“The thorn in my side,” he said, lazily leaning back in his leather bench.

He shakes his head, mixed emotions warring on his forehead. “I did once, I think. Over three hundred years ago, now.”

“But you don’t anymore.”

“She lost her soul. My fault.”

“Yep.” He stretches his arm wider, pinning me under a smoldering gaze.

His intensity hits me full force, but I persist. I want to know. “So you did love her.”

“Look, Madame l’Auteur,” he shoots at me, as he leaned forcefully forward into the table between us. “Yes, I loved Emme, or at least I thought I did. I was eighteen. I turned her. And then she turned thousands. Vampires. There’s no stopping them. One mistake. And I now have to fix it.”

“For eternity,” I say. “You’ve been atoning for that one mistake for centuries.”

“I have.” He huffs and pats his dog’s flank with a calm and steady hand. The strong fingers dig into the deep brown fur while his dog raises trusty chocolate eyes at him.

“And what about Maisie Thibodeau?”

“I don’t know.” His gaze turns troubled. “I saw her only that one time at the parley between the Warlocks of the Black Oak, the Elders of the White Holly and us, Mont-Royal Immortals. She was on the fringe of the forest’s clearing, with the other witches.”

“No. Just saw her. Couldn’t take my eyes of her. It’s like there was this strange connection between us. Seigneur! That flimsy summer dress she wore didn’t help either.”

“Yes. Diesel Stanford of the Warlocks wants Maisie to watch over Emme. To make sure she won’t hurt anyone. I have no choice. I don’t want an all-out war between the warlocks, the witches and the vampires.”

“So where does that leave you with Maisie?”

“There is no ‘with her’ happening. I’m not having another relationship. Too risky. And, she’s mortal.”

“I see. So how will you cope with her living at the Sanctuaire? Both of you under the same roof?” 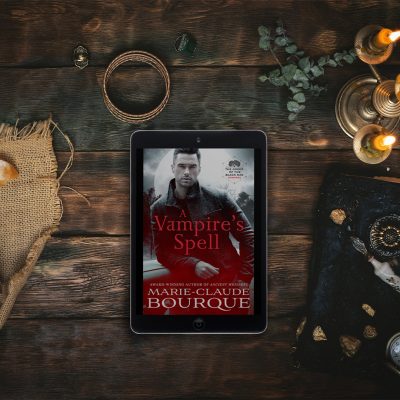 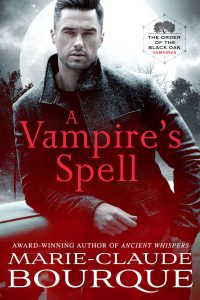 Meet the Order of the Black Oak: a powerful order of modern-day warriors fighting evil to protect the ones they love.

Blurb:  Son of an ancient vampire and a legendary French witch, guilt-ridden Mont-Royal Immortal Valerian St-Amand must team with a powerful New England witch to protect his city from a crazed scientist seeking immortality. But as his well-guarded heart softens for Maisie Thibodeau, their quest to eradicate true evil from the streets of Montreal destroys any hope of everlasting love.

Note: If you love loyal tough guys with hearts, satisfying slow-burn paranormal romance and safe Happily Ever Afters, then the Black Oak World is for you.

“5 stars. Marie-Claude creates a vivid and immersive world full of all sorts of spells, supernaturals and epic battles, that draws you in and doesn’t let go until the end.” Goodreads Reviewe

“5 stars…a fast-paced read with a balanced mix of action and paranormal romance, intriguing characters – even the mad vampire, Emmeline, shows great development – some interesting twists and set against the refreshing background of Montreal.” ~ Goodreads Reviewer

“I read this book in one sitting, just because I couldn’t put it down and it did take me until the wee hours of the morning to finish.

Welcome to The Vampires of Black Oak and they are just as sexy as the warlocks. Marie-Claude creates a vivid and immersive world full of all sorts of spells, supernaturals and epic battles, that draws you in and doesn’t let go until the end.” ~ Bookbub Reviewer

The monster hissed and snarled, a craving to kill etched deep into her features. Then she leaped. Her body rose up in the air in a tall arc, high above Maisie, and landed right behind her in the deserted street.

Maisie swiveled to face her, her palms burning with contained white fire, ready to strike.

“What the hell, Valerian!” Emmeline peered past Maisie to the sanctuary’s entrance. “I don’t need this.”

Valerian? Maisie’s heart seized, her limbs froze. With a large gulp, she turned back to the shelter’s entryways. Oh flaming hells! It was him.

A tall posture in a woolen coat adorned with silver fox fur that fluttered in the cold wind. Dark smoldering eyes in a classic profile with an ever-present undercurrent of darkness, which hummed with magical legacy. All his features joined with the inherited vampirism flowing through his vein to create the man—no the four-hundred-year-old being—who was now casually watching Maisie with a half-smile etched on his full lips.

His hand rested on the head of a hefty black Labrador that sat on its hind legs by the immortal’s side. The dog considered the two women with a calm demeanor, obviously waiting for his master’s call to act.

Maisie’s core warmed uncontrollably despite the cold, hit by the intense crush that had not left her since she’d first set eyes on him. She knew she was being silly, that twenty-five-year-olds didn’t fall in love with men they barely knew. But she was not a regular girl, was she? And just as she panicked in thick crowds and constantly needed to resettle her racing overactive brain, she had not been able to stop the crazy teenage-like infatuation sweeping her whole.

“Emme, meet Maisie Thibodeau. Your guardian.” His voice echoed rich and velvety into the crisp city air as he nodded to Maisie. The tone a deep frequency that settled heavily into her very core.

With her eyes wide, she took him all in while her heart hammered wildly and she let out a measured breath. She forced her jumbled mind to focus, to calm her intense longing of nestling her weary body right there at his broad chest, her cheek upon the black shirt under the open coat.

Lost in her cravings, she missed the shift in the air. 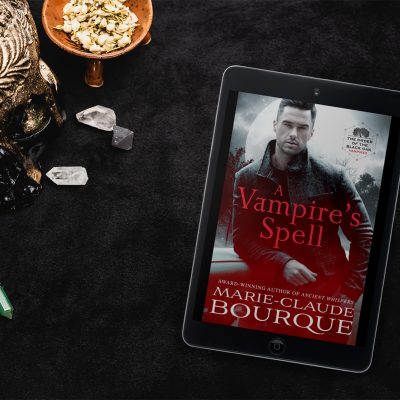 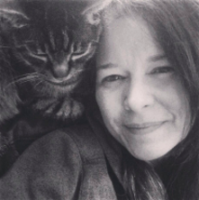 Marie-Claude Bourque is a Seattle-based author of gothic paranormal romance and the winner of the American Title V award with her first novel ANCIENT WHISPERS.

Happily Ever After always absolutely guaranteed!