Today, author Morgan Brice is guesting at my blog.  She’s here to talk about her latest release Huntsman, book one in the Fox Hollow Zodiac series, a m/m paranormal romance.  Don’t forget to enter the Rafflecopter giveaway.

What makes a MM romance memorable? What lands a story on your list of favorites, or even better, re-reads?

I suspect the answer is different for everyone, so I can only speak for myself as a reader, and for what I hope to make happen in my stories as an author. You may have different favorites, and that’s okay!

For me, it’s a combination of characters, plot and setting. Sure, there are cool extras that can make a story or a series fun—for example, an interesting type of magic in a paranormal romance. But if the other pieces don’t gel, it’s like having great icing on a so-so cake.

When it comes to characters, I want to be able to identify with them in some way. Not necessarily their exact circumstances, although sometimes you’ll find a situation that strikes really close to your own experiences. More often, it’s their vulnerability, their doubts, losses, and fears, their struggle to trust after being hurt, their dreams and conflicting goals. Maybe there’s a point of identification in the character’s background, or even in a physical challenge they face, like an illness, or disability. Identifying with some aspect of a character makes me root harder, feel the setbacks more, and ultimately share the glow of the HEA or HFN.

I’ll admit that personally, I think every plot is better if it has ghosts, monsters, magic or all of the above. I also love a good mystery/crime solving/quest along with my romance. For myself, I like just enough angst to get all the feels but still get my happy ending. Trope-wise, I’m huge on hurt/comfort, and my other favorites include second chance, friends-to-lovers, stuck together, and soulmates, among others.  And when I can find a plot that hooks me along with characters I care about? I’m in insta-love!

Setting can really add a lot to a book. With my own stories, I try to make sure that the setting becomes a ‘character’ in itself, and that the story couldn’t happen the same way anywhere else. I love diving into the history, urban legends, and ghost stories of a city and using those to write a story that is rooted in its location. As a reader, I love it when an author conveys the vibe of a place—its energy and what makes it special. Details like local foods, landmarks, etc. help to bring a story to life in my mind.

Those are the key elements that I appreciate as a reader, and that I try hard to deliver as an author. If they’re your favorites, too, I hope you’ll check out my books!

A grieving wolf. A hunted fox. Fated mates, thrown together by chance, and the looming threat of a fabled Huntsman who might tear them apart forever.

Blurb: Fox shifter Liam Reynard is running from a killer. He uproots his life to find sanctuary in Fox Hollow, deep in the Adirondack Forest in New York.

When his car breaks down, sexy wolf shifter Russ Lowe comes to the rescue, and one touch makes it clear they’re fated mates. Neither man was looking for love, and both are still mending from past heartbreak. When mysterious fires and disappearances threaten Fox Hollow, Liam fears the killer is hot on his trail. Can he protect the town and his fated mate from the evil hunting him, or will an ex-lover’s betrayal cost Liam everything he loves?

Huntsman is full of sexy shifters, hurt/comfort, second chance love, sincere psychics, hot first responders, found family, and fated mates. Intended for readers 18 years of age or older. It is the first book in the series.

Flashing lights broke Liam out of his gloomy thoughts. The tow truck headed toward him, then did a U-turn and pulled in front of Liam’s car, backing up until it was close enough to hook up the Honda.

The truck driver got out and walked toward Liam, who reluctantly got out of the car. Even though he had called for assistance and it was clear the stranger was a legitimate responder, Liam couldn’t help feeling jittery, with his hands sweating, and heart thumping.

Those reactions doubled when he got a good look at the driver.

Oh, just shoot me now. Fuck my life. Why did he have to be so fine?

In the glare of the truck’s spotlights, Liam made out all the important details. The man had broad shoulders, strong arms, powerful legs, and a solid chest, standing a good five inches or more over Liam’s five-foot-seven frame. Liam had thought he might be saved if the driver was ugly as sin, but he was out of luck. His face was as utterly lickable as the rest of him.

“I’m Russell Lowe—everyone calls me Russ. I own Lowe’s Auto Shop in Fox Hollow, and tonight I’m your personal tow truck driver,” he said with a broad smile and dimples. The man’s sharp cheekbones, full lips, and strong chin were highlighted by dark brown scruff. Liam’s gaze traveled upward, surprised at gray hair flecked with brown framing a face that couldn’t be older than thirty-five. Green eyes made Liam wonder what kind of shifter Russ might be.

He swallowed hard and might have blushed when he realized Russ seemed to be checking him out too. No matter how attractive his roadside savior might be, Liam’d had enough man trouble to last an eternity, and he sure didn’t need more in a new town.

“Yes, I’m Liam Reynard. Just Liam,” he said, wishing he could conjure up the natural charm that had always served him well in community theater performances. His fox could be quite dramatic. But now, on the run, scared for his life, and in the dark with a stranger in the middle of nowhere, he couldn’t muster his usual flair.

“The engine started making strange noises, and I pulled off. I didn’t want to break anything.” Liam cringed because heknew next to nothing about cars. Admitting that takes points off my “man score,” doesn’t it? Then again, so does being a sports-hating, gay fox shifter twink.

Well, at thirty, I’d thought my twink days were behind me. But when he compared his own shorter, lithe, dancer build to the solid man-mountain in front of him? Yeah, twink still fits.

“I’m glad you stopped the car without waiting for the car to stop you.” Russ finally shifted his attention away from Liam and focused on the Civic. “Let’s get the tow set up, and then you can ride in the cab with me to Fox Hollow.” 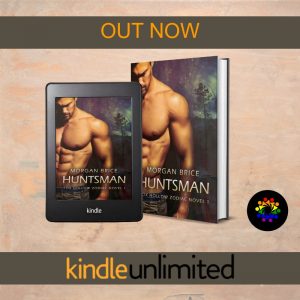 Morgan Brice is the romance pen name of bestselling author Gail Z. Martin. Morgan writes urban fantasy male/male paranormal romance, with plenty of action, adventure and supernatural thrills to go with the happily ever after. Gail writes epic fantasy and urban fantasy, and together with co-author hubby Larry N. Martin, steampunk and comedic horror, all of which have less romance, more explosions. Characters from her Gail books make frequent appearances in secondary roles in her Morgan books, and vice versa.

Series include Witchbane, Badlands, Treasure Trail, Kings of the Mountain and Fox Hollow. Watch for more in these series, plus new series coming soon!

Read a copy of my Badlands short story Restless Nights here for free.

Enter the Rafflecopter giveaway for a chance to win 3 ebooks of Witchbane, Badlands and Treasure Trail.

Follow the tour and check out the other blog posts, interview, guest posts and reviews here