Today, I’m reviewing Off-Balance, a May/December LGBT romance by Brigham Vaughn, book one in the Peachtree series.  Don’t forget to check out the excerpt.

Blurb:  Russell Bishop is a rising star at Vantage Marketing.

Stephen Parker is the company’s CFO.

A spilled cup of coffee gives them an opportunity to act on the mutual attraction they’ve both been trying to ignore. But attraction isn’t enough with an almost twenty-year age gap and clashing expectations about their relationship.

Fiercely independent, Russ isn’t sure he’s ready for long-term commitment and Stephen is afraid history is repeating itself.

Their relationship reaches a crossroads when the death of Stephen’s father forces them to visit his hometown in southern Georgia. Estranged from his family, Stephen must come to terms with his past and say goodbye to the father whose expectations he could never live up to. The small, conservative town provides its own challenges as Russ must find the strength to be the man Stephen desperately needs.

Note:  It is the first book in a new series.

“Hopefully, I’m not keeping you from a hot date tonight or something.”

Stephen let out a small snort of amusement. “Russ, I can’t remember the last time I had a hot date. Frankly, it’s been months since I’ve had a date of any sort. And they were lukewarm at best. If you’re asking if I’m single, the answer is yes.”

Embarrassed, Russ cleared his throat. “I was curious.”

“Nothing wrong with curiosity.”

“I’m single too,” Russ said. He cringed internally. Jesus. He’d had game once. Okay, maybe not game because he’d never had time to really develop it, but he used to be at least slightly smooth. This … whatever this was, was truly pathetic.

But Stephen didn’t seem too put out by his awkwardness. “Haven’t met the right person or no time to date?”

“Maybe a little of both,” Russ admitted. “It can be hard to meet men when you’re working fifty, sixty hours a week.” There. He’d at least managed to work the fact that he was gay into the conversation without doing it in the most cringey way possible.

“Absolutely,” Stephen said. “Though, from what I hear, you’re doing very well at Vantage.”

Russ blinked. He had no idea Stephen had even known who he was, much less that he’d been paying attention to how he was doing. “I had no idea you’d noticed me at work.”

“Oh, I noticed.” Stephen gave him a slow smile. “You needn’t worry about proving your worth, if that’s why you’re working those kind of hours.”

Was it Russ’s imagination or was there a hint of heat in Stephen’s eyes now and a faint rasp to his voice? “I like to make sure I take my time and fully grasp a topic,” Russ countered. “Get a real grip on it.”

“Traits like that will certainly allow you to get far at whatever you choose to do.”

Including with you? Russ wondered. “I’m trying to get ahead.”

The corner of Stephen’s mouth curved up even further. “That much is clear.”

“I suppose it depends on what you’re trying to succeed at.”

“I try not to make any assumptions about anything until I’m sure.”

Goddamn it. They were talking in circles and getting nowhere. Maybe Russ needed to try a different approach.

“I appreciate all of your help today,” Russ said. “I seriously can’t thank you enough.”

Stephen looked away from the TV again and shook his head, glancing at Russ with a small smile. “It’s the least I could do. I feel responsible for what happened.”

Russ smiled back, Stephen’s earnestness relaxing him. “Let’s call it even then, I guess. Or we could be up all night with this.”

Stephen quirked an eyebrow up at him, eyes crinkling at the corners with amusement. Fuck, what a turn on. Why older men were such an attraction for him, Russ would never be sure, but he’d realized it in college. He’d had a brief fling with a professor named Jack Burns after the semester was over. It wasn’t the forbidden aspect of it—they’d both waited until after Russ was no longer his student—but he liked the age difference.

A man with a fit body, handsome face, graying hair, and a killer smile always got Russ going. Hell, his head and ankle ached and he was still thinking about what Stephen would be like in bed. And was he flirting? God, Russ hoped so. “Well, being up all night isn’t always a bad thing.”

Stephen’s lips turned up at the corners in amusement. “You don’t think so?”

Russ shrugged. “It depends on the reason, doesn’t it?”

“Yes, I suppose it does,” Stephen murmured. He shifted to face Russ. “I’m afraid all of the best reasons are off the table at the moment though, aren’t they?”

Stephen Parker is the CFO of a major marketing firm.  He’s a silver fox.  He’s paid off his debt, as expected at his age, and is financially secure—all he needs now is the right lover to enjoy the fruits of his hard work.

Russell Bishop is young, climbing the corporate ladder, in massive debt, and is still coming into his own at his young age.

This makes for some serious conflict.

The meet-cute is great.  It says a lot about Stephen.  He’s mopping up his spilled coffee, well, trying to.  Of course, Russ lands in the stuff, slips, and twists his ankle.  They’ve been eyeing each other since they work for the same company.  This is Stephen’s opportunity to make his pitch.  It’s not the greatest pitch.  Kind of a “ball” instead of a “strike.”

But it does put them in the game.

And they are off and running!  Stephen is a control freak and wants to lavish everything he has on Russell, but Russ doesn’t want to be anyone’s boy toy.  Just like any other young person, he wants to build a career and financial security.  The big question driving this plot is if they can make it work.

I must say I adored Stephen.  He was a great guy, a really great guy.  As for Russ, because of his age, naturally, he’s not going to have the maturity that Stephen possesses.  Being young, his pride is going to crop up and punch holes in their budding relationship.  I don’t blame Russ.  Anyone at that age wants to prove themselves.

Since the relationship is new, it takes time to learn how to communicate, and boy, these two suck at it LOL.  Stephen’s age leaves him riddled with insecurities, and Russ has his own insecurities going on.

The author does a good job of portraying “the same fight,” because the “same fight” is going to happen until they find their common ground.  This “same fight” is what makes or breaks relationships. Ask any couple, and it’s usually that “same fight” that leads to divorce or allows them to overcome the hurdle.  So for these two to tackle that problem head-on so early says a lot about them, and their commitment to each other.  The book does span about five months.  They accomplished what sometimes takes a good five years with most people in long term relationships.

It’s not a slow burn romance.  Things move quickly. But I liked this.

The writing is excellent.  I will say that there is too much narrative that does slow down the pacing.  Other than that quibble, this is a nice enjoyable beach read if you find yourself at the beach over the summer.  Do yourself a favour and grab yourself a copy. It’s a great first book for the series. 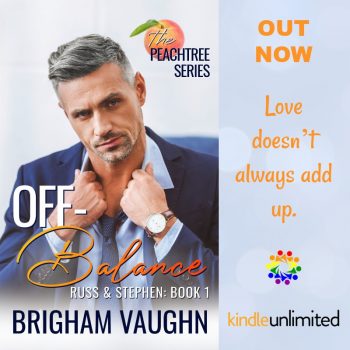 Brigham Vaughn is on the adventure of a lifetime as a full-time author. She devours books at an alarming rate and hasn’t let her short arms and long torso stop her from doing yoga.  She makes a killer key lime pie, hates green peppers, and loves wine tasting tours. A collector of vintage Nancy Drew books and green glassware, she enjoys poking around in antique shops and refinishing thrift store furniture. An avid photographer, she dreams of traveling the world and she can’t wait to discover everything else life has to offer her.

Her books range from short stories to novellas to novels. They explore gay, bisexual, lesbian, and polyamorous romance in contemporary settings.