Today, I’m reviewing Away to Me, a contemporary romance by fellow eXtasy Books author V.J. Allison. 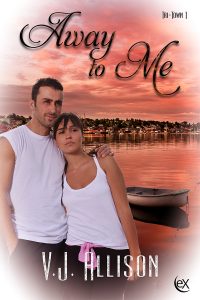 Away to Me by V.J. Allison

Sometimes you have to go back to move forward.

Blurb: What would you do if you found out your late spouse wasn’t the biological parent of your stepchild as they had led you to believe? Would you let it go, in hopes the child wouldn’t go looking for their birth family, or would you help them in their search?

This is the dilemma Neil Falcon faces when he first discovers his late wife, Rita, wasn’t the biological mother of his teenage stepdaughter, Rikki.

His decision to look for her roots puts them on a path that leads them to a part of Neil’s past, one he thought was locked away forever.

Kelsey Wagner is shocked to see the man she once adored appear on her doorstep with claims that Rikki may be her biological child. After finding out her daughter wants her to be a part of her life, she agrees.

Amidst the confusion of raising a teenage daughter, the old feelings resurface. They know their daughter wants them to become a family, but can they make it work?

Kelsey’s entire body shook and impatience rose in her gut as Neil fumbled with the seal on the envelope. The rasp of paper against paper tore through her ears, and a shimmer of dread went up her spine as Neil silently read the results.

“What does it say?” she prompted quietly after a moment.

He let out a long sigh. “It’s a girl,” he said and cleared his throat.

She took the papers from his hand and scanned the page, unable to believe it.

She read the results, and tears formed in her eyes.

Rikki is my child.

Her gaze rose to meet his, and they stared at each other tearfully. When he motioned to her, Kelsey flew into his embrace. Her feet left the floor for a moment as Neil hugged her.

She scrambled to put everything in its place.

Rikki was the baby she only saw twice, once right after she was born and for a half hour the day after. She had held the little girl and given her a bottle. When the nurse came to take her to her adoptive parents, Kelsey had hugged her tightly, told her she loved her, and gave her one last kiss.

Kelsey thought it was going to be the only memories she would have of her child.

“What are we going to do now?” her soft question broke the silence.

His words felt like lava to her ears, hot, uncomfortable, and unwelcome.

She straightened to stare at him. “What do you mean by that?” She couldn’t keep the annoyance out of her voice.

“Kelsey, she’s your daughter. I’m only her stepfather, and the courts think the biological parents should raise—” He coughed.

Her eyes widened. “You think I’m going to fight you for custody.”

He averted his gaze.

“I can’t believe you think I would be mean enough to separate you two!” She pulled out of his arms, stomped a few feet away from him, and bit her lip.

Fucking asshole. He knows me better than that!

“You’re her mother. I know how hard it was for you to give her up. I lost track of how many times you cried on my shoulder because you missed her, that’s why I thought—” He shoved his hands into his jean pockets as he turned away from her.

She’s his kid. I’d rather gargle acid than hurt him, or Rikki.

When she saw his hunched shoulders, stiff back, and shaking knees, Kelsey’s fury at him turned to understanding and sorrow. She sniffled and swiped at some tears with her sleeve before she reached out to touch his arm. “Neil, look at me.”

He shook his head, his entire body tense.

She cupped his cheek and forced him to face her. Her thumb caressed his cheekbone, and she pressed her forehead against his while she tried to explain her feelings about what was right for Rikki. “She’s your kid, more than she’ll ever be mine. You’re the only dad she remembers, and I’d hurt both of you if I took her from you. I don’t want to do that.”

He nodded reluctantly and sighed. His arms went around her waist.

She slid her arms around him and held him close.

We are a team, if Rikki wants both of us.

“Do you want visitation?” Neil asked softly after a few minutes.

She pulled back and stared up at him. “I’d love it, but I’d rather not intrude.”

“She wants you in her life, and I do too. We’ll make arrangements for you to see her during vacations and holidays.”

“I want to get a lawyer to help us set things up. That way you know where you stand, and we know what’s expected from all of us.”

“I don’t want you thinking I’ll go back on my word and take off with her sometime.” She peered up at him and blinked.

“Once you give your word, it’s written in stone.”

She fingered his shirt collar. “I also want to pay child support.”

He stiffened. “Rikki and I don’t need your money.”

“It’s right and fair, Neil. You’d be doing the same if things were the other way around.”

“Yeah, I would,” he grumbled, and let out a long sigh.

He rolled his eyes.

“This feels weird,” she whispered after a moment.

“Having a child with you.”

He pulled back to stare at her blankly.

“What?” she asked, exasperated.

“You make it sound like it’s a bad thing.”

“You’re the last person I thought I’d have a kid with,” she replied with a wry smile.

Neil let out a long breath. “She’s my world.”

“And you’re hers,” she said softly. “If I turn out to be half the parent you are, I’m going to be a great mother.”

I’ll get right to the review since everyone’s read the blurb.  First, I love that the novel takes place in the Maritimes.  I’m a huge fan of eastern Canada.

There are three main characters.  Hero Neil Falcon, his stepdaughter whom he deems as his real daughter, Rikki, and the birth mother of Rikki, heroine Kelsey Wagner.

I’ll start with Neil.  He’s a great guy.  He’s the kind of guy women love to date and the guys enjoy having beers with.  Widower Neil is a writer and works for a magazine.  His boss is a tyrant, but Neil manages to juggle career and parenthood.

Rikki is going on fourteen.  And she’s every inch a fourteen-year-old:  willful, struggling to find her independence, reverting to a little girl when things go wrong, and demanding a perfect family life from Neil and Kelsey.  I thought Rikki was wonderfully written.  The way Rikki swung from wanting to be an adult and then scuttling back into childhood was bang on.  The author should consider YA because Ms. Allison nailed adolescence to a T.

As for Kelsey, she’s struggling to make a living as a maid at the beginning of the story.  Kelsey’s had a tough life of physical, emotional, and mental abuse living with an alcoholic mother.  Finding herself pregnant at sixteen, she ran away, and this is where she met Neil, who was her counsellor at the group home, and helped Kelsey get back on her feet.

The story gets rolling right away.  The reader is dropped into Neil arriving at Kelsey’s apartment in Montreal.  I liked this, because the story centers on Neil, Kelsey, and Rikki fighting to become a family.  Neil struggles with his feelings, because he wants Kelsey.  Kelsey feels the same way.  Their fears were wonderfully portrayed, because there is much to fear.  It’s a big step for all three, and as mother and father, neither wants to disappoint Rikki if a relationship doesn’t work out.  I liked how they put Rikki first.

As for the dialogue, it’s witty, emotional, and so to character.  The author really excels here.

The trio hit a lot of rough patches, and the tests were if they could work it out as a couple and as a family.  There are few surprises, too, that kept the story fresh throughout the novel.

I don’t want to say too much or I’ll leave spoilers.  Let’s just say this is a novel about a family struggling to become one loving unit, and they have many hurdles to pass to see if the three get their HEA.

It’s a short read at 53K words, but Ms. Allison does her job as an author and covers everything within the pages. I highly recommend Away to Me.

Do yourself a favour and pick up a copy at eXtasy Books.

Have you read Away to Me?  Do you agree with my review?  If you haven’t read the book, would you be willing to now? 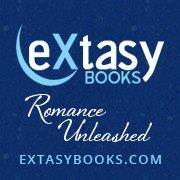