Today, I have author Christina Britton in the interview chair.  We discuss her writing process and her favourite authors.  I’m also reviewing her latest release A Match Made in London.  Don’t forget to enter the Rafflecopter giveaway.

1. If you could have been the original author of any book, what would it have been and why?

Harry Potter! I swear, every time I read through those books I am absolutely captivated, transported to this magical, fictional place. And those books are so beloved. To be able to write something that touches people to that degree would be amazing.

2. What makes this particular genre you are involved in so special?

The Regency era has an elegance and refinement to it, but also a fun naughtiness. It’s so unlike the modern world, yet can carry many modern sensibilities. I’ve been drawn to it for so many years, I can’t even imagine writing anything else.

3. How important is research to you when writing a book?

Incredibly important, though it can be daunting to get every single detail absolutely spot on. There’s a balance in historical romance, between the fantasy of it all and the realism. It’s that balance, giving a little in each direction, that makes the genre so captivating. But you still have to respect the time period, and especially the readers who love it.

4. What works best for you: Typewriters, fountain pen, dictate, computer or longhand?

I start my books by fleshing them out with gel pens and spiral notebooks. Once I get my main characters and the central conflict fleshed out, I move to computer. Most of the actual writing is done straight to computer, though when I hit a roadblock in the story I work it out long hand.

5. When did it dawn upon you that you wanted to be a writer? What inspires you to write?

I knew I wanted to write not long after I bought my first romance novel when I was just thirteen years old. I remember that trip to Waldenbooks vividly, and I still have the book. I was so transported, so inspired, I had to try my hand at it. I don’t remember ever thinking I could do it better. I just wanted to do it, too. It was a dream for so many years, one of those things you see as unattainable but still like to turn over in your head every now and then. It wasn’t until my youngest started school, though, that I actually became serious about it. I was selling my paintings at the time, and was at a cross roads: either work toward becoming a children’s book illustrator, or write. I came across a letter from my late grandfather just then, in which he had written he couldn’t wait for me to become a published author. That set my course then and there.

6. Do you read much and if so who are your favorite authors?

I love reading. The ones I gravitate toward are other historical romance authors, such as Julia Quinn, Tessa Dare, and Sarah MacLean, among (many) others. When I’m actively writing I have to read in my subgenre, otherwise the flavor of my writing is off. I just can’t get the right historical feel. When I’m editing I’ll read contemporaries, especially Adriana Anders. I also adore anything by Courtney Milan or Alyssa Cole, both in contemporary and historical romance. 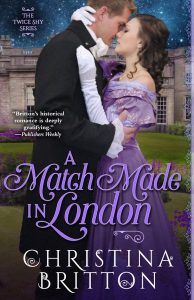 A Match Made in London by Christina Britton

Blurb:  Miss Rosalind Merriweather’s life has been one of hardship and servitude since her late sister’s ruination. Now a paid companion, her latest post brings her to London to watch over the daughter of a social climbing harridan. She vows to protect her charge―and her own heart―from rakes and libertines, the very type of man who destroyed her sister. This vow proves difficult when Sir Tristan Crosby, the epitome of all she despises, begins to show attention to the girl.

Tristan has spent decades perfecting his easygoing, charming persona to hide the damage done by years of abuse by his father. Finding he has a talent for matchmaking, he fills some of the emptiness inside him by helping the overlooked, shy women of London find true love. However, the latest young woman has a watchdog of a companion who seems to see beyond his careful façade to the flawed, uncertain soul he strives to hide from the world. Even worse, she affects him in ways no woman ever has.

But he will not give up his matchmaking, even for one such as her. What he does not expect is for Rosalind to be fired from her position because of it―nor that she will immediately find a position in his own household. When these two headstrong adversaries meet under one roof, will their attraction to one another lead to heartbreak, or have these two passionate souls finally met their match? 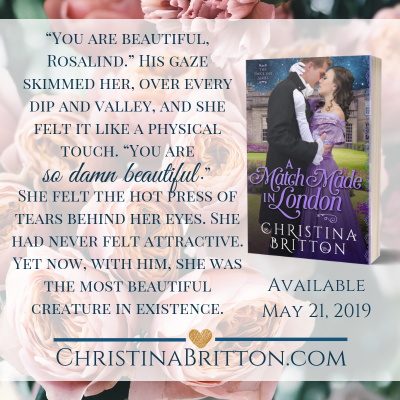 I’ll get straight to the review.  First, Ms. Britton is an excellent writer.  Her prose is impeccable.  Very impressive.  The words flowed smoothly on the page.  There was a lot of internal narrative coming from both main characters that could have been edited out, which made the story longer, but it was still an enjoyable read.

Both characters had believable backstories that created conflict between them.  Rosalind lost her sister to a rake, and she blames this man for her sister’s ruin and death.  While Tristan has his own demons to battle from his childhood and upbringing.

The two don’t exactly clash.  It’s Rosalind who’s hostile and mistrustful.  Tristan is intrigued by her uptight, proper demeanour and although he wishes not to desire Rosalind, he does.  As for Rosalind, she’s drawn to Tristan’s charm, which makes him an excellent matchmaker for the ton.

When Rosalind’s fired from her job, she is taken on by Tristan’s cousin Grace.  I must say I adored Grace.  She was such an awesome character that she almost stole Rosalind and Tristan’s spotlight. I do hope the author creates a story for Grace.

Anyway, back to the review.  The two wind up under one roof much to Rosalind’s utter disgust, so they also wager a bet.  Sparks are flying.  They both are in denial, but can’t help the attraction.

The dialogue is witty and very much captured brilliantly for the time period.  The setting and detail were excellently done.

It’s a light on conflict, nothing too deep since everything’s tied up with a perfectly neat bow at the end, but it does make for a wonderful lazy read at the beach.  If you enjoy the Regency period and the rakes that go with it, you’ll enjoy the third book in the Twice Shy series, A Match Made in London.

Christina Britton developed a passion for writing romance novels shortly after buying her first at the tender age of thirteen. Though for several years she turned to art and put brush instead of pen to paper, she has returned to her first love and is now writing full time.  She spends her days dreaming of corsets and cravats and noblemen with tortured souls.

She lives with her husband and two children in the San Francisco Bay Area.  A member of Romance Writers of America, she also belongs to her local chapter, Silicon Valley RWA, and is a 2017 RWA® Golden Heart® winner. Her debut novel, With Love in Sight, was released by Diversion Books in early 2018.

Enter for a chance to win a $20.00 Amazon Gift Card.
a Rafflecopter giveaway

3 thoughts on “Christina Britton – A Match Made in London”