Some spell it Ojibwe.  For others it’s Ojibwa.  But I grew up learning to spell it Ojibway.  All are correct.  There’s nothing I love more than immersing myself in a good book about the history, culture, and people of the Anishinaabe Nation.

My love of reading prompted me to do a post about some great books I’ve immersed myself in, for pleasure or for research.  I should say all for pleasure since every book I read is pleasurable.  Because there are many books I’ve stuck my nose in, I’ll be splitting this post into Part One and Part Two. 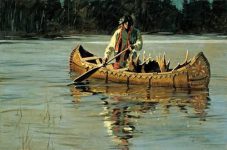 Everyone’s journey is a story.

For this post, I’m going to list and highly recommend the late and great Basil Johnston, a survivor of the Indian Residential School (he attended the same one as my dad, but they attended at different times since Basil is much older than my father).

Blurb courtesy of Goodreads:  Rarely accessible to the general public, Ojibway mythology is as rich in meaning, as broad, as deep, and as innately appealing as the mythologies of Greece, Rome, and other Western civilizations. In Ojibway Heritage Basil Johnston introduces his people’s ceremonies, rituals, songs, dances, prayers, arid legends. Conveying the sense of wonder and mystery at the heart of the Ojibway experience, Johnston describes the creation of the universe, followed by that of plants and animals and human beings, and the paths taken by the latter. These stories are to be read, enjoyed, and freely interpreted. Their authorship is perhaps most properly attributed to the tribal storytellers who have carried on the oral tradition that Johnston records and preserves in this book.

Blurb Courtesy of Goodreads:  Manitous lived in human form among the Ojibway in the early days, after Kitchi-Manitou (the Great Mystery) created all things and Muzzu-Kummik-Quae (Mother Earth) revealed the natural order of the world. With depth and humor, Johnston tells how lasting tradition was brought to the Ojibway by four half-human brothers, including Nana’b’oozoo, the beloved archetypal being who means well but often blunders. He also relates how people are helped and hindered by other entities, such as the manitous of the forests and meadows, personal manitous and totems, mermen and merwomen, Pauguk (the cursed Flying Skeleton), and the Weendigoes, famed and terrifying giant cannibals.

Blurb courtesy of Goodreads:  The Ojibway Indians were first encountered by the French early in the seventeenth century along the northern shores of Lakes Huron and Superior. By the time Henry Wadsworth Longfellow immortalized them in The Song of Hiawatha, they had dispersed over large areas of Canada and the United States, becoming known as the Chippewas in the latter. A rare and fascinating glimpse of Ojibway culture before its disruption by the Europeans is provided in Ojibway Ceremonies by Basil Johnston, himself an Ojibway who was born on the Parry Island Indian Reserve. Johnston focuses on a young member of the tribe and his development through participation in the many rituals so important to the Ojibway way of life, from the Naming Ceremony and the Vision Quest to the War Path, and from the Marriage Ceremony to the Ritual of the Dead. In the style of a tribal storyteller, Johnston preserves the attitudes and beliefs of forest dwellers and hunters whose lives were vitalized by a sense of the supernatural and of mystery.

Blurb courtesy of Amazon:  “The tales are woven with the wise counsel of Nanabush and the realities and mysteries of a way of life bound to the land, its seasons, wildlife, and remarkable weather, especially thunder and lightning. Maxine Noel’s bright, dramatic paintings are mythological, sensuous, and romantic.” — Toronto Star

“The stories speak of times past; of mermaids and mermen; of love and human relationships with spirit beings; of tricksters, wit, and wile; and of seasons imbued with power and mystery. Maxine Noel’s bold and graceful figures shimmer with movement and colour – bright reds, greens, and ethereal hues. These wonderful, mythical tales will enhance any library.” –Canadian Book Review Annual

4 thoughts on “Books about the Ojibway Nation – Part I”