It is not a standalone story. It is the second book in a series.

Is a human lifetime long enough to learn to love a vampire?

The tumultuous events of the Blood Winter are a fading nightmare, and Alec and Terje are trying to build a life together at Alec’s newly restored ancestral home of Glenroe. There’s just one problem… Terje doesn’t appear to be committed—constantly called away on mysterious errands and seemingly unable to forsake his own kind. Alec begins to wonder if Terje is capable of loving anyone, let alone him.

When an old uni friend Jay Singh, recently out of the closet and looking rather too good to be true, returns to Alec’s life, he becomes more conflicted than ever. Things only escalate when Alec is forced into the social and political issues still surrounding the haemophiles’ tumultuous integration into human society and soon it is more than just his relationship on the line.

Can Alec figure out what kind of future is possible with a vampire—and if it can ever be enough for either of them—before it’s too late?

Terje was brushing his long fingers through the hair on my chest. I forced my eyes open, fighting back the warm oblivion that had threatened to steal me away.

Terje chuckled softly and extricated himself from my arms. I made a noise of protest, propping myself on my elbows as Terje started to collect his clothing from the floor.

“What are you doing?”

“You should sleep,” Terje said, pulling on his jeans.

“This is the first night we’ve had together in weeks,” I muttered, taking Terje by the wrist and pulling him close. “I’m not going to sleep for any of it.”

Terje brushed a kiss across my forehead. “If you’re sure…”

“Of course I’m sure,” I said, annoyance bleeding into my tone.

Terje, either not noticing or not caring about my reaction, continued to dress, pulling on his T-shirt, shoes and light, black jacket. He always wore muted tones, blacks and grays, sometimes pale blues. It should make someone with his pale complexion look washed-out or even sickly. But against his smooth, pearlescent skin and hair, it just made him look exotic, unearthly, surreal but achingly beautiful.

“Are we going somewhere?” I asked, breaking off from staring to retrieve my underwear.

“I’d like to go for a walk,” Terje said, pulling a band out of his pocket and tying his blue-white hair back into a tail. As I was the only one available to cut it and I wasn’t the best hairdresser, he’d allowed it to grow long again. The shorter strands at the front fell into his eyes, but it left the smooth lines of his neck free.

“In the park,” he replied, fetching a bottle from a bag he’d dropped in the corner. “Below the castle.”

“They have that here,” Alec said, indicating the fridge.

“I prefer my own,” he replied. He opened the bottle, drank deeply and color washed into his cheeks. He dropped the empty bottle in the specialist canister next to the fridge and went toward the window.

“This is a safe place,” I muttered, grabbing a fresh shirt out of my case. “You don’t have to go out of the window.”

“It’s better to be careful,” he said, then was gone.

I sighed, trying to fight the return of my frustration. I finished dressing and hurried out into the busy city night. The air had cooled but the towering stone buildings still retained some of the warmth from the day, giving the air an enclosed feel. The sky arched black overhead, bleached featureless by streetlight.

Terje was nowhere in sight. I crossed the North Bridge, heading for Market Street and the way down into the Princes Street Gardens. The noise of people weaving between the bars, clubs and restaurants fell away as I descended the stairs into the cool, fresh openness of the park. A train heading into Waverley station hissed by on the rails above. As I ventured farther in to where the only light was from the LED lampposts installed to lower light pollution, the stars finally became visible, glittering like diamonds on a sheet of black velvet.

Edinburgh Castle glowered from its clifftop, all ramparts, towers and impossibly large blocks of stone. I had always thought it looked forbidding, but when Terje stepped out of the shadows to stand at my side and gaze up at it in quiet wonder, I tried again to see it how he might see it.

“It’s beautiful, in its own way,” he had said the first time we had visited Edinburgh, almost a year before. “It’s a promise to protect as well as to fight back.”

Looking at his profile in the starlight, my anger faded and, for the moment, I was just grateful he was back.

He laced his long fingers through my own. The memory of Jay touching that same hand earlier that day rose in my mind but I shook it away, along with the ghosting guilt. Terje sent me a sideways look and I was suddenly certain, however impossible it was, that he knew. But then he started to walk down the path, drawing me with him.

“We have a story about a haemophile that lived in the castle in the middle ages,” Terje murmured as we walked. “Did I tell you that?”

“No, you didn’t. I’ve heard lots of ghost stories about it,” I said absently. “Never anything about vampires.”

“It’s one of our stories. Like a cautionary folk tale…”

Terje’s forehead creased slightly in the pale light. “Very few of our kind have ever lived outside of a commune. This one did. Her story, well…it doesn’t end well.”

S.J. Coles is a Romance writer originally from Shropshire, UK. She has been writing stories for as long as she has been able to read them. Her biggest passion is exploring narratives through character relationships.

She finds writing LGBT/paranormal romance provides many unique and fulfilling opportunities to explore many (often neglected or under-represented) aspects of human experience, expectation, emotion and sexuality. 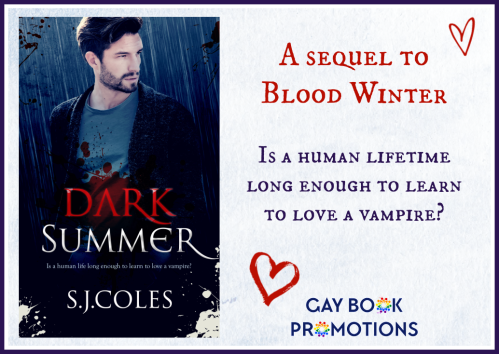