Book Title: Matched By My Rival

It is part of a series (Thrust Into Love) but can be read as a stand alone.

I hate my teammate, Parker Reed.

I hate that he makes me work so hard for my position on the field.
Hate how he always smiles. How easily he shows me up when I’m injured.

Most of all, I hate that he made me lose my temper.

Next thing I know, football is gone.
My scholarship is gone.
I’m nearly gone, too.

With help, I manage to stay in school for my final semester.
At least without football, I can explore a new side to myself.
See where my attraction to guys takes me without fear of it affecting my future.

I didn’t see it coming. The cosmic joke.
The sweet, patient guy on the hookup app?
The one who makes me burn with the desire to have him?

Our chemistry is off the charts, no matter how much I resent him.
Holding a grudge against him is impossible.
But when he wants to walk away from everything I lost, can I accept it?

If I don’t, I’ll lose him too–and that can’t happen.
Because I don’t hate Parker Reed.
I think I love him.

Note:  Matched By My Rival is an enemies-to-lovers, jock rivals romance. It’s Book 2 of the Thrust Into Love series but can be read as a standalone.

Note:  The following excerpt is from Simon’s POV, when he realizes that his app hookup is actually his rival, Parker Reed.

This couldn’t be happening. Parker Reed? Parker Reed was my Thrust match? No, I refused to believe it.

“There must be some mistake,” I growled.

He didn’t back down. Parker wasn’t the type. But for once, his obnoxious grin was absent.

“No mistake. A surprise, for sure.”

I turned to Rhett, who was watching us with the fascination of a driver gawking at an accident scene. “I’ll close up if you let me take care of this.”

“Yeah, sure. Bar’s done serving. Knock yourself out, just…clean up the blood before you leave.” He cut his eyes toward Parker. “Whoever you are, I wish you the best.”

He exited the bar through a little section of counter that raised up, creating a gap. I held it open for Parker, jerking my chin toward the back room. “Let’s go.”

Parker chuckled nervously as he passed through the bar entrance, brushing against my chest. I could feel his body warmth, smell his aftershave, an earthy natural scent that suited him.

Heart pounding, I led him into the back room. Surrounded by boxes of liquor and kegs of beer, I whirled on him. “Did you know?”

Parker appeared off-balance. Usually he was a smooth fucker.

“Were you playing me?” I demanded, crowding him against a stack of boxes. We were close to the same size, but I didn’t let it stop me from putting every ounce of threat I could into my voice.

“No!” The word burst from him, sounding incredulous. “How would I know it was you? We never shared personal stuff.”

“So it’s a coincidence?” I said skeptically.

“Yes. It’s a really awkward coincidence that the guy I—” His voice cracked, and he looked away. “I didn’t know.”

“Look me in the eye when you say it.”

Parker reluctantly looked at me, frustration blazing. “You’re such an asshole sometimes, Prentiss.”

A shocked laugh burst out. “Really?”

“Yeah, I know I screwed up, okay? I never should have gone to that party with Kristin. And obviously we wouldn’t be here if you knew it was me on that app. But you don’t have to interrogate me like a fucking criminal.”

A whole series of memories hit me. All those flirty chats. Those sexts that Parker had so patiently walked me through. I’d thought he was the nicest guy on the planet.

“Fuck me,” I muttered, looking away.

“Please stop saying that,” Parker said in a strangled voice.

I jerked my eyes back to his face in time to see a look of such lust it shot heat through my entire body. “What?”

“Fucking you is all I’ve thought about for weeks.” He laughed weakly. “Joke’s on me, huh?”

I couldn’t stop my eyes from making a slow perusal of his body. It was dark, but I could make out the shape of him. I knew how fit he was. Knew because we had practically the same body, the way we’d pushed ourselves in training. He was of a slightly leaner build than me, more flexible. I knew his body intimately too. A series of pics from his profile, and even more illicit ones he’d sent me directly, had filled in any blanks I might have had.

His chest rose and fell faster. When I raised my gaze to his face, he dragged the tip of his tongue over his dry lips.

And I lost it.

There was no thought, no reasoning. I’d spent weeks dipping my toe in the water, testing, evaluating. But now I was in the deep end.

I was ready to swim. Or maybe I’d drown. But if I did, I was taking us both down.

I crushed my mouth to his, shoving him harder into the boxes, and he grasped at my waist for balance, gripping hard enough to hurt. The pain only fueled my need. I grabbed his hair, short on the sides but longer on top, and yanked his head back to better devour his mouth.

Weeks of buildup, of flirting with my bisexuality and tempting myself to no end, exploded in a fiery inferno of need.

I didn’t care if it was Parker. I didn’t care that he was a man I’d blamed and detested. In some ways, it made it easier.

This wasn’t the love connection I thought it might be. It was unbridled lust, and I was just getting started. 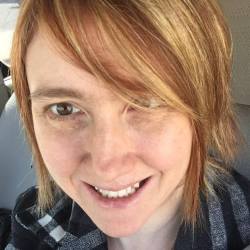 DJ Jamison writes romances about everyday life and extraordinary love featuring a variety of queer characters, from gay to bisexual to asexual. DJ grew up in the Midwest in a working-class family, and those influences can be found in her writing through characters coping with real-life problems: money troubles, workplace drama, family conflicts and, of course, falling in love. DJ spent more than a decade in the newspaper industry before chasing her first dream to write fiction. She spent a lifetime reading before that and continues to avidly devour her fellow authors’ books each night. She lives in Kansas with her husband, two sons, one snake, and a sadistic cat named Birdie.

Enter the Rafflecopter Giveaway for a chance to win a $10 Amazon US gift card or an ebook copy of Swiped By My Dad’s Best Friend. 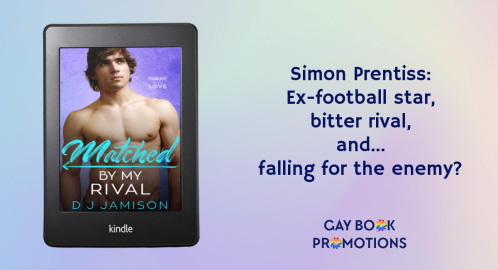