The stories are best read in the following order:

After vampire hunters force them to flee Tokyo, Taku and his lover, Thane, try to make a new life for themselves in England. But three months later Thane is still tormented by nightmares of the fire that almost cost them their lives. This leads to carelessness and the discovery of one of his victims.

When faced with threats from all sides Taku tries his best to protect them although his actions are met with disapproval and anger from Thane. Unknown to his lover, Taku is also struggling to keep hidden the truth of what really happened three months ago.

However, it is only a matter of time before Taku’s past and bloodline catches up with him.

It is part of the Demon’s Blood universe, but can be read as a standalone.

Thane’s arms curved around his back and he felt the younger vampire trembling as he rested his head on Taku’s shoulder. So easily broken, Taku often forgot what it had been like in the beginning. For him things had been different, he reminded himself. He had already known what it felt like to take a life.

With Nagasaki in the grip of a bitter winter, two vampires struggle to hunt in the challenging conditions. When an opportunity to feed from a dying man presents itself, Taku insists that they take advantage of it. Yet his newly turned lover is left feeling devastated by their actions. Seeing Thane so distraught is more than Taku can bear and so he makes a decision to shield Thane as much as he can from the darker side to their existence. However his desire to protect Thane might one day cost him everything.

Never Change is a short story set in the Demon’s Blood universe.

Out of respect for the relationship we once had I will spare your life. However, if you try to obstruct me again then I will kill you.

Vampires are now an endangered species. Possessed by the demon Kurai, Kokawa Taku has sworn to eradicate all those whom he deems inferior.

Determined to free Taku from the demon’s corruption, Thane seeks help from Taku’s sire, Takata Koji. Thane’s search for answers takes him to Hong Kong where he learns the devastating truth. That in order to save Taku, Thane may have to kill him.

Refusing to accept this, Thane makes a decision that places the fate of all vampires in the balance. However Thane is unaware of the betrayal around him and that his actions will either save Taku or destroy him.

Takata Koji knew he was dying. The sickness that had swept through his village had been relentless and had claimed the lives of scores already. He had fallen ill five days ago, two days after his younger sister, Kaede, died. The physician had just been to see him. The grim expression on the man’s face and the distraught weeping of his mother only confirmed what, deep down, Koji already knew. He did not want to die. He was only twenty-five. He wanted to cling onto life with every fibre of his being. But simply the will to live was not enough. Koji’s body ached and he could not get warm, no matter how many blankets his mother brought him. His voice had failed him two nights ago and was yet to return.

It was a cruel hand of fate that the direct descendants of the Takata clan had managed to survive elimination at the hands of their enemy only to perish now. The Okada clan had defeated his relatives almost a hundred and fifty years ago in battle. Of their branch of the family Koji was the only male born; the last heir. His mother could bear no more children.

Hearing the voices of his parents Koji glanced towards the shoji. He had only seen his father once since he became ill. His mother said the man was consumed by grief. Koji knew better than this. Takata Kazuhiro had talked of nothing other than reclaiming his clan’s status and land since Koji was a boy. Yet his own frailties had prevented him from achieving this himself. Some of the Takata clan’s descendants had managed to secure positions within the Tokugawa Shogunate. However, a poor background and ill health had prevented Kazuhiro from doing the same. Koji had been his last hope. It was more than his son dying; it was Kazuhiro’s dreams too.

Koji inhaled deeply, finding even this intake of air difficult as he shifted his position on the futon. The movement caused one of the woven blankets to slip off him and onto the tatami floor. There it remained. Koji lacked the strength to reach over for it. A hacking cough shook his fragile form. He had lost so much weight that his clothes hung off of him. The last time he had gazed at his reflection he had seen a corpse rather than a man staring back.

Koji gasped, fighting to catch his breath as the painful tickling sensation in the back of this throat relentlessly forced the violent coughing fit. A metallic taste welled up in his mouth and the frightened young man gagged over the side of the futon. The hand automatically flying to his mouth came back slicked with crimson.

“Nishimura-san!” his mother raced into his bedroom screaming for the physician at the sight of her son’s blood. Koji felt hands on his shoulders. He was roughly shaken when he failed to respond. Panicked golden eyes raised to meet his mother’s terrified ones even as his vision began to fail him.

Her cries were becoming fainter now and the darkness that he was falling into was more inviting. As much as he feared death, Koji now felt some relief at its embrace. He was so tired. As much as he wished to hold onto life he realised that, deep down, all he really wanted was to be free of the pain.

Candles flickered in the dark, the heat from their burning light touching his sensitive skin as he was drawn from unconsciousness once more. Hot, red wax dripped onto the stone altar from the ceiling above. One spot landed on his palm, causing a hiss of pain to escape him. The clan’s Mon – coat of arms – was etched crudely into the low ceiling. The large circle and rhombi making up the outline of the symbol seemed to swell in size the longer that he stared at them. The two smaller diamonds in the centre were coloured completely in red.

Koji could hear the hum of lowered voices around him yet they remained in shadow. He tugged weakly on the rope that bound his arms above his head and back against the stone surface. An unnecessary precaution, for the fever had robbed him of most of his strength. He could barely curl a palm into a fist.

A weakened cough alerted them to his wakefulness and one man stepped forward. Koji tried to make a sound but a gentle gasp was all that was permitted from dry lips as his father approached. Takata Kazuhiro’s stern expression did not falter although there was some regret lingering in his reddened eyes.

Kazuhiro sustained a leg injury in a fight before Koji was born and had walked with a stick ever since. He leaned heavily on this now, as though it would somehow give him strength. A candle lit lamp was held in his free hand. Koji shifted slightly under his father’s gaze not understanding the situation or the reason for the man’s silence. He had slowly begun to recognise the room that he was in and confusion filled him. It was the village shrine.

“Kazuhiro!” Another voice broke through the quiet murmurs. Koji’s gaze turned to the newcomer. Tears stained his mother’s cheeks. Her hair had fallen free from her usual ponytail to tangle around her face in wild waves. The streaks of silver were clearly visible now. Since he had fallen sick she seemed to have aged twenty years.

“Do not do this,” she pleaded softly of her husband. “Nishimura-san—”

“Cannot help him,” Kazuhiro finished for her. His words were as hard as stone. “This is the only way.”

“He is our son! And you would condemn him to this!”

“It will save his life,” Kazuhiro gestured to the two men – whom were neighbours of the Takata’s – standing behind him. “It is a great gift, Natsumi.”

Koji watched helplessly as the two younger men seized his mother and dragged her from his line of sight and back into shadow. He could make out her further protests and sobs for a few moments. A cry pierced the calm of the room. Then silence followed.

Shari Sakurai is a British author of paranormal, horror, science fiction and fantasy novels that almost always feature a LGBTQ protagonist and/or antagonist. She has always loved to write and it is her escape from the sometimes stressful modern life!

Aside from writing, Shari enjoys reading, watching movies, listening to (loud!) music, going to rock concerts and learning more about other societies and cultures. Japanese culture is of particular interest to her and she often incorporates Japanese themes and influences into her work.

Enter the Rafflecopter Giveaway for a chance to win one of three ebooks from Shari’s backlis. 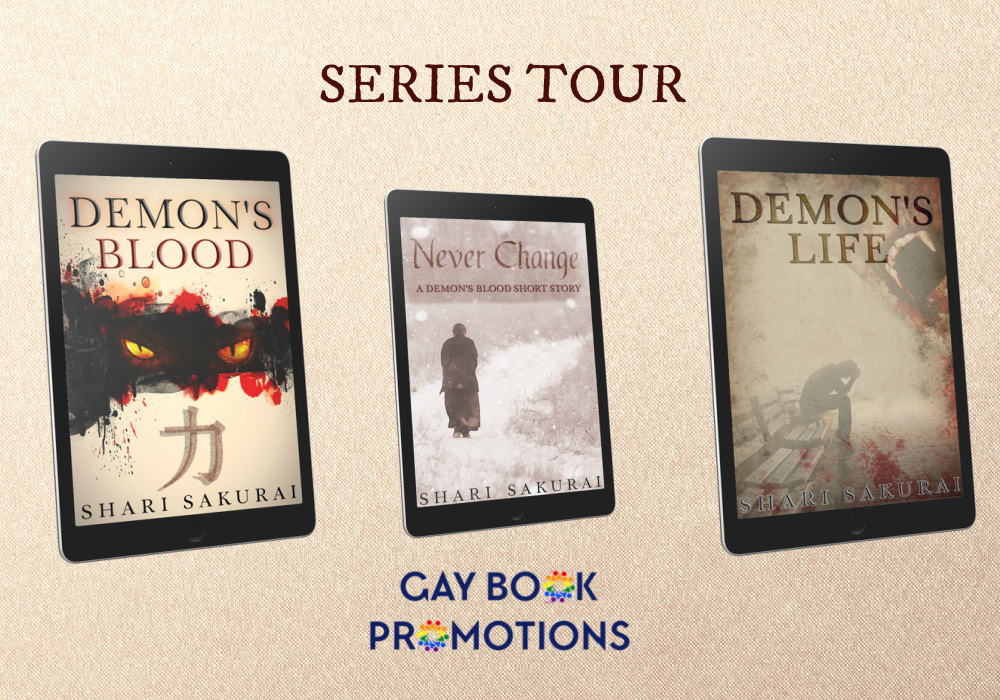