Today, author Jes Drew is guesting at my blog.  She’s here to talk about her latest release Accidentally on the Run, book one in the Accidental Superhero Story series, a romantic suspense.  Don’t forget to enter the Rafflecopter giveaway.

I have been fascinated by the concept of superheroes since the beginning of my writing career- it’s how I began it, actually, with The Time I Saved the Day. When it comes to superheroes- and supervillains- there is a lot of dynamics to consider. There is the struggle of good versus evil, of course, but it is more complicated than just that. Sometimes the question is, how far can a good guy go to stop a bad guy- even doing bad things for a good reason- before it’s too far and they are, in fact the villain? How far should they go? Another dynamic I explore in this book is how sometimes someone’s greatest strength can become their greatest weakness- and vice versa. It all depends on how you wield it. 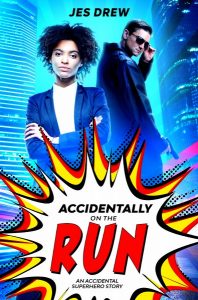 Blurb:  Gabriel Cooper is just another cop on the NJPD- well, just another cop, except with almost psychic instincts. When those instincts lead him onto a bus to capture a hostile, he’s exposed to a mysterious bomb. Still, it seems like just another adventure he walked away from. Except that suddenly, his instinct is becoming his primary sense to keep out of trouble- and there is a lot of trouble.

Braelin Cunningham has no family, but she does have her best friend Gabe. She’ll do whatever it takes to protect him from the mysterious League of Incredible Supermen. As long as Braelin gets to be by the side of her best friend and secret crush, she’ll do it. Even if it means going on the run when more than the League get interested with Gabe’s newfound abilities.

On the run together, it seems like no matter where they turn, danger is there. When it comes to having superpowers, apparently, you can run- but you can’t hide.

I blink, surprised. Not by the words— Gabe and Nick rib at each other all the time in that weird man tradition. But it’s the vehemency in the tone that throws me off guard.

Forcing a laugh, I pet Nick’s hand. “You know as well as I that I’m not Gabe’s, and vice versa. We’re just—” I manage not to choke on the word. “Friends.”

My soul shudders. Because then I know what’s happening. How could I not, when Nick and I are so similar?

We both know the pain of unrequited feelings.

“Nick—” I begin, because I need to get in control of this conversation before it becomes the nightmare I’ve always feared for myself, only for the most injured man in the room.

But I can still see something break in Nick’s eyes just at my one word.

Then Gabe strides in. “Nick! Braelin! What did I miss?”

I blink, not sure what to say or do or think. 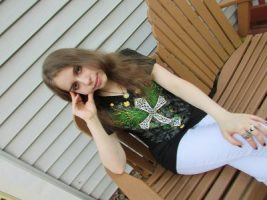 Jes Drew is the author of the Ninja and Hunter trilogy, the Howling Twenty trilogy, the Kristian Clark saga, the Castaways trilogy, and Mind of Darkness. She lives with her mom, dad, younger sister, four younger brothers, and two dogs, obsessing about her true love, Captain Steve Rogers. There is a possibility that she may or may not be a superhuman, but she hasn’t discovered her powers. Yet. Also, she might be a spy, but that’s classified.

Two holographic stickers, an ebook copy of The Time I Saved the Day (another one of my books), and a five-dollar Amazon gift card.

2 thoughts on “Jes Drew – Accidentally on the Run”