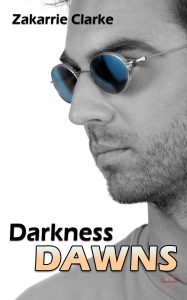 Blurb:  Darkness Dawns is a love story. It also tells the tale of one man’s war with himself, brought onto the battlefield of his blindness. Leo Ferrar suffers from diabetic retinopathy and lost his sight two years ago. Unable to bear the scrutiny of strangers or the impact of his blindness on those he loves, Leo has determined on shutting the world out ever since. This is the man Ben meets on his first day at work as Mr Ferrar’s care assistant.

A former heroin addict, Ben was sentenced to six months community service as punishment for his crimes by a judge entitled to condemn him to a seven-year stretch. Far too charming for his own welfare, Ben soon proves unaccountably brilliant at ‘bulldozing the blind’.

When fate sees fit to dispatch Ben to the home of the man he has internally dubbed Mr Ferrarcious; it is with the words of the last five unfortunates who’d dared darken Leo’s doorway ringing in his ears.

A door that is opened by a man who might be Lord Byron himself. Drop dead gorgeous and as hot as hell, Leo Ferrar has the most beautiful eyes Ben has ever seen.

Never has an irony seemed so cruel. Nor fate so fortuitous.

The blurb above says it all, so I’ll get straight to the review.  When reading the first paragraph, I was hooked.  The voices of the characters were rich and strong, so strong I swore Leo and Ben were showing me their story.  Not telling.  Showing.  You swear Leon and Ben simply had author Zakarrie Clarke take dictation.

The novel played out with the richest and deepest scenery in my head.  The dialogue was real, so real I could see Leo and Ben standing there, jabbering back and forth with their naughty puns, dry humour, and oh-so-casual banter.  Yes, the dialogue—each had a distinct voice.  I knew who was speaking at all times.

These characters JUMPED off the page.

As for their story, the author did her research.  She captured Leo brilliantly as a man who’s lost his sight and refuses to accept his blindness.  When I finished the book, I had a great sense of knowing Leo, because I had a hunch he was a man who fumbled through life trying to find his place and happiness, even before losing his sight.  Yes, he had his music that brought joy.  Yes, he had the odd fling or two.  But Leo didn’t really understand the beauty life offers.  He seemed to exist.  And his impending blindness through his illness only made matters worse for him.

So when we meet Leo, he’s deep in grief.  He’s at that spot the author captured brilliantly of before and after.  I loved how Ms. Clarke named when Leo lost his sight as before.  Because when a person grieves a deep loss, this is how they think.  Time stops at that moment when their world crumbles to dust.  Before.  Nicely done.

Enter Ben, a man who’s spent his last two years acting as caregiver for the cranky, what-the-hell, so-be-it Violet before her death.  Most would run in fear from her, unable to cross the rickety bridge she’s built, but Ben does cross, with flying colours.  No falling into the ravine full of trolls.  And he’s able to do the same with Leo.

Does Ben have his doubts at times?  Yes, he does, which makes him so human.  Of course he wonders if he’s upsetting Leo who is very sensitive about his blindness.  Of course Ben’s a tad unsure of himself, pondering whether his actions are pissing off Leo.  But Ben is a delightful man full of optimism, so much so Leo can’t help sliding into Ben’s “slipstream,” as the author so wonderfully puts it.

I won’t spoil the ending, but it ended appropriately–that first step.  And from what I understand, there will be another book.  I can hardly wait to read and review it, and see what happens next for Ben and Leo.

I HIGHLY recommend this book.  It moves at a slow pace.  It’s rich in internal narrative.  So if you’re looking for something fast paced and full of action, you won’t get that with Darkness Dawns.  This is a man’s journey to self-acceptance, helped by another man who is fighting to make this sightless individual “see.”

Have you read Darkness Dawns?  Do you agree with my review?  If you haven’t read the book, will you give it a try?  Let me know in the comments.  Please remember to always be respectful with your viewpoint.